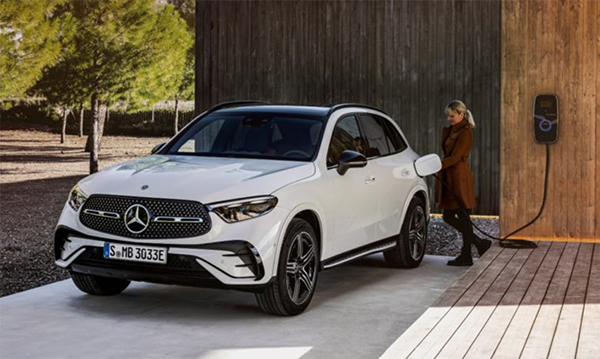 Under the motto “More electric than ever”, Mercedes is expanding the number of PHEV models available for the new Mercedes GLC SUV. Thus, customers will be able to choose between two petrol PHEV versions compared to only one in the previous generation. In addition to the GLE 300 e 4Matic, the Mercedes GLC 400 e 4Matic is now also offered. Both are already available to order. Prices for the GLC 300 e 4Matic start from 71,471.40 euros and the GLC 400 e 4Matic from 74,922.40 euros.

From spring 2023, it will also be possible to order the diesel PHEV version GLC 300 de 4Matic.

Compared to the old generation, all PHEV models have received a battery with a much larger capacity of 31.2 kWh compared to 13.5 kWh before. This means that the electric range is up to 130 km depending on the version compared to 45 km before. The new Mercedes GLC can be charged at both AC stations up to 11 kW and DC stations up to 60 kW like other PHEV models from Mercedes. Mercedes is currently the only manufacturer to offer charging at DC stations for the PHEV models, so the 31.2 kWh battery can be charged in just 30 minutes.

All PHEV versions feature a more powerful electric motor, 136 HP compared to 122 HP before, while maximum torque remains unchanged at 440 Nm.Top version GLC 400 e 4Matic develops 381 HP and 650 Nm and the GLC 300 de 4Matic diesel PHEV version is now more powerful, with 335 HP and 750 Nm compared to 306 HP and 700 Nm before. Mercedes has optimised the driving programmes and the hybrid mode favours electric propulsion as much as possible, which is possible thanks to the increased electric range. The GLC also has a new off-road mode.