The new Mercedes GLC appears to have improved in every area over the old model, but unfortunately you’re likely to incur a hefty price increase for this newfound ability. The GLC has class-leading technology on board and feels more premium, but perhaps most surprisingly, it drives as well as any of its rivals. This all bodes well for the incoming more powerful Mercedes-AMG variants. 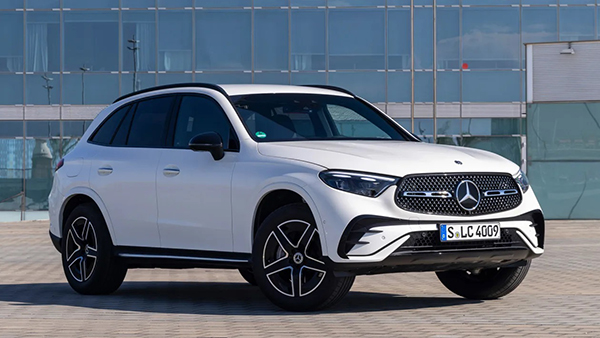 The GLC is simply the best-selling model in the Mercedes line-up across the world, with 2.6 million units sold since 2008. Messing with its formula would be a bold move, but in the ever-competitive mid-size premium SUV sector, some boldness could help keep sales rolling in.

Enter the new, third-generation GLC (Mercedes includes the GLK-Class, which we didn’t get in the UK). From the outside, the brand has clearly played it safe as it carries over much of the design seen on the old car, as well as hints from the rest of the German firm’s range.

The AMG Line model we tested does feature some exterior tweaks over the standard version though. Most of the exterior chrome on the lower-spec model is replaced with black gloss trim on the AMG Line, and the grille has a unique pattern in the shape of Mercedes’ badge in a similar vein to the C-Class. There’s also body-coloured wheel arch trim, a more aggressive front bumper with larger intakes and a rear diffuser that highlight the AMG Line car’s additional sportiness. Overall though, the new GLC’s design is more of an evolution over the previous generation.

Mercedes says the 220 d model will be its biggest seller here in the UK, and that’s the one we’re driving here. The engine is a four-cylinder turbodiesel with mild-hybrid assistance. Together, the system pumps out 197bhp and 440Nm of torque, sending power to all four wheels through Mercedes’ tried and tested nine-speed automatic transmission. With a 0-62mph time of 8.0 seconds, it’s the slowest iteration of the new GLC, but it doesn’t feel that far behind its more powerful plug-in hybrid siblings when you’re on the move. Indeed, the 0-62mph time is only one tenth of a second slower than an equivalent BMW X3 xDrive20d and four tenths off an Audi Q5 40 TDI.

Acceleration from lower revs is where the mild-hybrid boost helps most, negating some of the turbo lag. Maximum power arrives at 3,600rpm and torque is spread evenly from 1,800 to 2,800rpm – which doesn’t sound like a wide power band but the 220 d offers really flexible power delivery. It’ll rev to just over 4,000rpm, at which point you feel the power diminish quite severely, as with many diesel engines. Keep it within the torque band – which the gearbox does a good job of – and the GLC 220 d feels more than fast enough however.

As you’d expect, there are various driving modes that switch up the way the GLC drives, including Eco, Comfort, Sport and Individual.

Mercedes claims the GLC 220 d will return 50.4mpg on the combined cycle – compared with its aforementioned German rivals, that’s 2.9mpg better than the BMW and 6.9mpg better than the Audi. This impressive efficiency is obviously easiest to achieve in Eco mode, where the GLC’s automatic transmission prefers a higher gear.

The car we drove featured adaptive suspension, or ‘AIRMATIC’ as Mercedes calls it. Unfortunately, it won’t be available on UK cars, which is a shame because it deals with bumps and ruts in the road very well in Comfort mode. This plush suspension set-up and the extra sound deadening means the GLC is superbly quiet and refined on the motorway. The smooth Spanish roads we drove on won’t be a true test of the new GLC’s ride quality anyway, so we’ll reserve judgement until we try it on rougher British roads on the regular steel-sprung suspension we’ll get here. As standard, the GLC will use four-link suspension at the front with a multi-link independent rear. 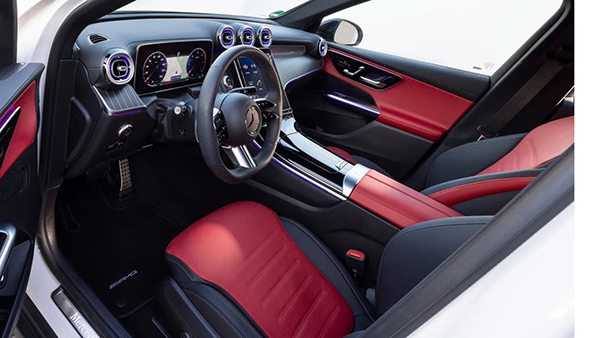 In Sport mode the GLC’s steering, engine and suspension (with AIRMATIC, at least) all feel sportier. The steering gains some extra weight, the transmission is keener to hold onto gears and change down early, and the suspension firms up. There’s also fake engine noise that is ducted into the cabin – but don’t worry, it can be switched off. While it’s a rather gruff noise with the standard nine-speaker sound system, a more convincing V8 burble is present with the optional Burmester sound system.

This all helps give the GLC a genuinely fun driving character. Sitting on Mercedes’ new MRA2 platform shared with the latest C-Class, the wheelbase has increased by 15mm, the track has widened by 6mm and the new car also sits 4mm lower than its predecessor. The new GLC offers up a marked improvement in dynamics and so long as you’re fairly gentle with your inputs in corners; there’s not much body roll despite the fairly hefty 2,000kg kerb weight.

Some of the extra length is successfully disguised by the addition of four-wheel steering. It’s not as aggressive as the system in the brand’s EQS (which offers up to 10 degrees of steering angle on the rear axle). Instead, there’s just 4.5 degrees of counter steering at speeds of less than 37mph.

A longer body, resulting in a larger cabin, complements the extra wheelbase length. Starting up front there’s plenty of storage bins, including a large split-opening central armrest cubby. The position of the gear selector on the steering wheel column also means the centre console features an additional compartment. Although, the piano black top is expansive and easily scratched. The rest of the interior’s build quality and choice of materials is very similar to that of the new C-Class, which is certainly no bad thing. It feels every inch the premium SUV inside. 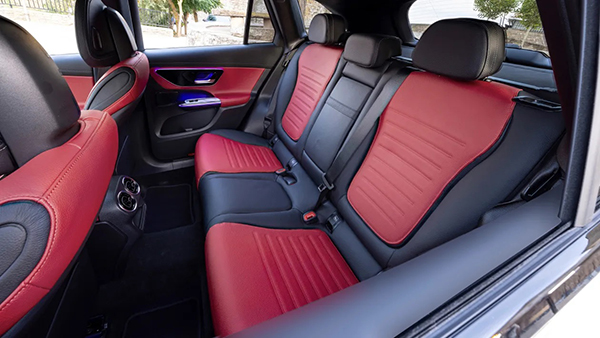 The dash is dominated by an 12.3-inch touchscreen (again, the same as the C-Class) and in front of the driver there’s an 11.9-inch display. The MBUX infotainment system can look a little daunting at first with lots of information displayed at once, but stick with it because it’s one of the more intuitive systems on the market.

The new GLC can also be specified with an optional head-up display that can be tailored to show nine different layouts. What’s more impressive is the new optional “Transparent Bonnet”. It’s similar to Land Rover’s system and uses a 360-degree camera to display a virtual view underneath the front of the vehicle making off-roading easier (although the typical GLC buyer might find it more useful for kerb avoidance).

Passengers in the back will appreciate the extra leg and headroom over the old model – which doesn’t come at the cost of boot space. In fact, the new car has 70 litres more luggage room than its predecessor, at 620 litres with the rear seats up and 1,680 litres with them folded down.

Pricing for the GLC range is yet to be announced, but we expect it to start in the region of £50,000. That’s a fairly big increase over the newly facelifted £46,570 BMW X3 and £46,650 Audi Q5. If you’re a company car user-chooser however, that higher price could be negated by the frugality of GLC 220 d as it emits 146g/km, placing it in a lower BIK tax band than both the BMW and Audi.