Mercedes-Benz is preparing for a product push quite unlike any other in the brand’s history, with fresh coupés, convertibles, people carriers, mega off-roaders, hypercars, hyper-luxury cars, plus plug-in hybrid and fully electric AMG models all on the horizon. 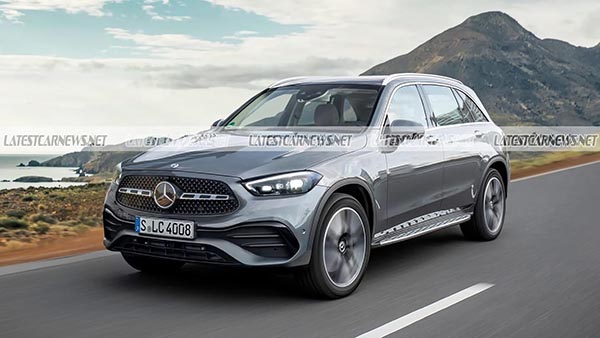 However, one of the most important models in this huge rollout will be the next-generation Mercedes GLC, previewed in our exclusive main image and due in the UK next year.

In 2020, SUVs accounted for 43 per cent of all Mercedes sales globally, and the Audi Q5-rivalling GLC is the brand’s best-selling SUV in the UK. As such, away from the headline-grabbing announcements and revolutionary new models, vehicles such as the GLC remain core to the brand’s business – and it’s a car many people new to the marque find themselves buying.

This fresh version may well be the last GLC developed on a combustion-engine chassis, using the Modular Rear Architecture 2 (MRA2) platform shared with the latest C-Class and S-Class saloons. Four-cylinder petrol and diesel power supported by 48-volt electrics, and a significant new plug-in hybrid model with a far larger battery than the outgoing GLC 300 e’s, will see the model electrified further than it has ever been.

Joining the evolutionary styling will be a totally revamped interior. It’ll come with a cabin overhaul similar to that of the C-Class, using the brand’s latest portrait-style MBUX infotainment system.

But while the next GLC will aim to make a splash in a market space that’s safe territory for Mercedes, much of what’s in development behind the scenes at the brand’s HQ will see the brand go down unexplored paths, as well as revisit old ideas with new impetus.

We’ll start seeing some of these fresh models in new sectors very soon – as soon as September’s Munich Motor Show, in fact. And it looks like Mercedes is on for a bumper 2022.

One of these new models has already been revealed. The new C-Class All-Terrain sees Mercedes venture into the off-road-ready compact-exec estate market with a rival for the longstanding Audi A4 Allroad. It’ll be on sale towards the end of 2021 or early 2022 – but it’s not for the UK market.

This is not the only new Mercedes built for off-road capability that is set to be introduced in the coming months. A new G 4×42 is being readied for introduction in early 2022, and it’s been caught testing several times by spy photographers. The format looks similar to that of the previous version of the luxury monster truck, transformed by the fitment of portal axles and huge off-road tyres that enable massive ground clearance. The new car will benefit from the latest G-Class’s updated platform and driver technology, alongside its serious off-road assistance systems.

We’ll see an electric stablemate for the regular G-Class, too, although not until 2024. Mercedes has confirmed that it intends to turn its off-road legend fully electric, and the EQG nameplate has been trademarked. Technical details are unknown for now, but it’s thought the brand will electrify the current car’s ladder chassis, rather than turn to a purpose-made EV platform such as the new EVA system under the EQS limo. The brand is likely to preview this EQG with a concept much sooner than its anticipated 2024 release.

Of course, electric cars will make up the bulk of introductions over the next few years, and we’ll see the next new EQ model very soon indeed: the E-Class sized EQE. It’ll be revealed at the Munich show in September and will be on sale in early 2022, packing the battery and motor technology used in the new EQS flagship into a smaller, executive saloon-sized package.

Teaser images suggest very similar styling to that of the EQS, previewed in our mock-up, while the EVA platform’s scalability means that a shorter wheelbase will accommodate a smaller and more affordable battery pack than the huge 107kWh set-up used in Mercedes’ largest EV.

Electric SUVs are in vogue, and that’s why we’ll see three new Mercedes models in this sector by the end of 2022. The first will be the EQB – a compact SUV based on the small but versatile GLB. This car has already been revealed for the Chinese market with a range of 260 miles on a full charge and seating for up to seven. The European version will be on sale in early 2022.

Following this GLB will be two electric SUVs built on the brand’s fit-for-purpose EVA platform. The EQE and EQS saloons will gain SUV stablemates by the end of 2022, integrating both the drivetrain and cabin technology of their lower-riding namesakes.

The EQS SUV will most likely become the longest-range electric SUV on the market, with a slightly downgraded estimate on the EQS saloon’s official 484 miles. It will also aspire to be the most luxurious electric car on the planet, because the EQS SUV will gain a Maybach version come 2023. We’ll see a concept previewing this model shortly, but the transformation will likely be in keeping with that of the Maybach GLS compared with the regular version of the brand’s flagship SUV: bespoke styling and badging, unique touches in a finely crafted cabin, and with two full-size seats in the rear.

Alongside the electrification of Maybach, the AMG performance division will push on with full EVs and hybrids in the near future. We’ll see the first fully electric model later this year, in the form of the EQS AMG, tipped to take on the Tesla Model S Plaid with up to 751bhp from an AWD electric powertrain. We’ll also see a plug-in hybrid version of the brand’s Porsche Panamera-rivalling AMG GT four-door on sale in early 2022. Combining battery, electric motor and 4.0-litre V8 turbo, power will step up to 804bhp, with 0-62mph in as little as three seconds and zero-emissions running possible. Similar technology will be used in the next C 63 saloon and estate. It’ll drop V8 power in favour of a development of the A 45’s 2.0-litre four-cylinder petrol turbo combined with an electric motor, as it targets at least 500bhp from both power sources combined.

One AMG hybrid we’ve seen for some time now – but not in production form – is the AMG One hypercar. It uses a version of the 1.6-litre V6 hybrid turbo used in Mercedes’ all-conquering 2016 Formula One car, with 986bhp and modified to enable pure-electric running. Teething troubles have delayed its arrival, but we should see it on roads in 2022.

AMG has been busily working on a model launching within the core Mercedes brand, too – the next-generation SL, which will be revealed towards the end of 2021 and go on sale next year. It will be an altogether sportier affair than the old model, using an AMG-developed platform that will be shared with the next-generation AMG GT. The SL 43 version will make use of a 3.0-litre turbocharged six-cylinder engine, with the SL 63 adopting the well known 4.0-litre V8 turbo from other AMG-badged models.

And it’s not the only convertible model on the horizon. Breaking cover in 2023 will be a car with a new name, the CLE. Also coming as a coupé, this will cover fresh ground for Mercedes as a bridge between the C and E-Class convertible and coupé models, replacing both to reduce complexity in the line-up. It means that Mercedes is poised to limit the next-gen E-Class, also due in 2023, to saloon and estate bodies only.

And CLE isn’t the only new badge that will be appearing in the near future. The brand also has plans to introduce a T-Class line-up in 2022, which will be a van-based MPV based on the same platform as the latest Renault Kangoo. As with the Renault, Mercedes is planning an all-electric version – the EQT, which has already been previewed in concept form. This will be launched towards the end of next year.