The design of many makes and models changes over time. Some are radically different from what came before, while others are iconic and difficult to modify. That challenge hasn’t stopped Mercedes from continuously tweaking the G-Class’ boxy styling, introducing a thoroughly redesigned one for 2019. The G-Class is about to undergo a mid-cycle refresh, and new spy shots have captured those changes on a test vehicle.

A partially camouflaged Mercedes-AMG G63 was recently spotted making its rounds in Nurburgring. Judging from its zebra camo, it looks like it’s due for a mid-cycle refresh.

The G-Class is easily recognizable by its boxy design, circular headlamps, and stiff rectangular bumper bulging in the wraps. Meanwhile, its AMG G63 identity is revealed by its exposed exterior, twin side exhausts on each side, and Panamericana grille with vertical slats hiding behind the frontal wraps. It’s hard to make out what the three-pointed star marque has in store for the interior design of the auto as of now because of the heavy covers within. As a consolation though, the hidden parts in Mercedes prototypes usually hint at the areas due for an update. That means more exciting changes are coming up in the facelifted G-Wagen. 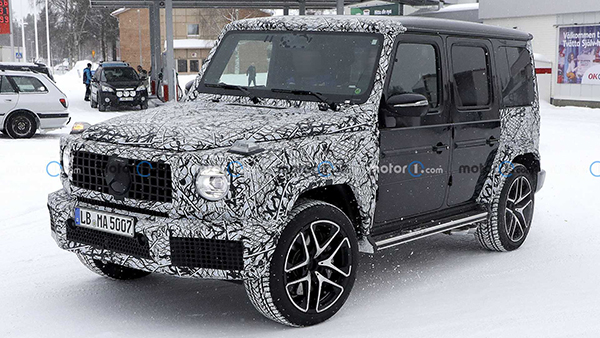 At present, the AMG G63 is powered by a 4.0-liter twin-turbo V8 with 577 hp and 627 lb-ft of torque. The output is distributed via a nine-speed automatic transmission to an all-wheel-drive system with a two-speed transfer case and three-lockable differentials. The configuration allows the acceleration of the high-performance SUV from 0 to 60 mph in just 4.5 seconds while its max speed is capped at 149 mph with all the bells and whistles from AMG.

It is rumored that the next-gen G-Class will get a mild-hybrid powertrain featuring EQ Boost. However, the facelifted Mercedes-AMG G63 that’s due late this year will likely retain the current gen’s prevailing mechanical specs.