This 1 of 1 Brabus 63 Squared took over 2 years to build in two different phases. About R10,000,000 worth of modifications and alterations gives you a car that will impress about as much as it will scare you.

There are two types of car enthusiasts, those that mod their cars for performance and those that mod them for looks. This 1-of-1 G 63 4×4 falls in the middle. It’s a rugged, brutal beach car but with top-of-the-range finishes on the interior.

It started off as a regular white edition G 63. The build went through two stages – the first for 3 months and the second for 6 months, spread over two years.

The main idea was to turn this Mercedes-AMG G 63 into a full-on beach summer car. There’s a lot of tweaking on the suspension system, lifting the off-roader as high as a G-Class Squared. It runs on a set of black Forgiato wheels that have it hovering high in traffic. The only downside to this is it will take a lifetime to make a u-turn. 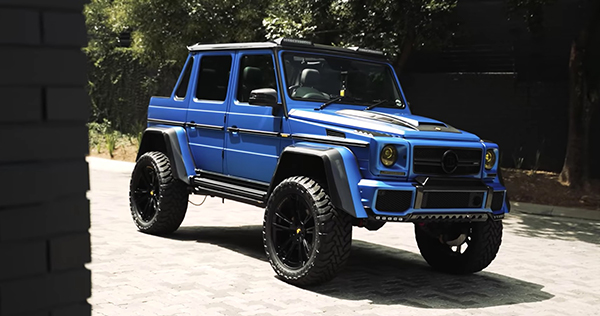 The engine is stock but with modifications on every component, including the turbos, to raise the torque levels. They also included a full-performance Brabus exhaust with cutouts sticking on the side. We don’t know how much power this G 63 is making – but it has to be a lot considering the investment at hand.

Since they were looking for a 4×4 beach off-roader with a Landaulet design, they chopped off the roof to let in more light. The seats have a Lamborghini Urus quilting pattern, while all carbon trims and titanium logos are 3D-printed for a unique custom finish.

Behind the wheel, this 1-of-1 G 63 sounds fantastic. It has a unique, deep rumble. It’s swift and glides through steep elevations with minimum effort. It’s interesting what one person can do with $600,000 to spare. It’s almost feels like a show-off.