During the Petrolhead Spring Event in The Netherlands I have filmed a brutal BRABUS 700 based on the Mercedes-AMG G63. You will see it racing on the 1/4 mile against a Porsche 991 Turbo S, BMW M4 G82, Hamann BMW X5M, Mercedes-AMG GLE63 S, Jeep Cherokee Trackhawk and other supercars! Who will be the fastest?

Although it’s hindered by questionable styling upgrades, the 700 Widestar is genuinely quick in a straight line. Take, for instance, the first drag race in the featured video. Not only does it dig in better, but the Brabus also has the longer legs over its bone-stock brother due to 950 Nm (701 lb-ft) of torque compared to the carmaker’s rating of 850 Nm (627 lb-ft) for the G 63.

Next up, the matte-black utility vehicle proves its mettle against an S-Class Coupe with V8 power. On the third run, the 700 Widestar fails to assert dominance over the GLE 63 S 4Matic+ Coupe. The subsequent rivals, namely the G82 M4 and a Hamann-tuned X5 M, both make easy work of the body-on-frame SUV from Bottrop. Two more challengers in the guise of a Jeep Trackhawk and an F80 M3 show the Brabus their rear ends. 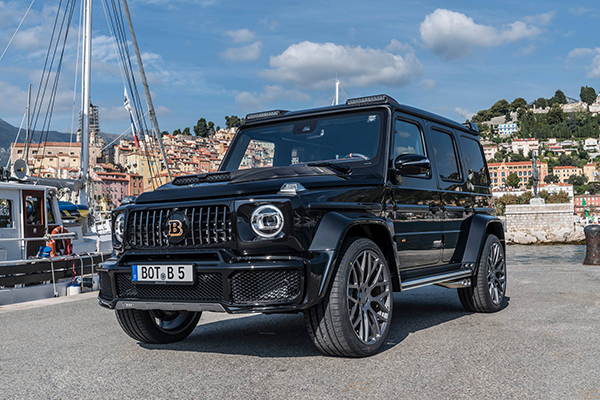 Clearly not intended for strip-slaying shenanigans, the 700 Widestar is capable of hitting 100 kilometers per hour (62 miles per hour) in 4.3 seconds, onto a top speed of 240 kilometers per hour (149 miles per hour). This performance is made possible by a plug-and-play module with a more aggressive software mapping for the injection system, ignition, and turbochargers. A sportier exhaust system also needs to be highlighted.

On the visual front, the distasteful exterior is complemented by a more luxurious interior clad in Alcantara and fine leather upholstery. A new set of paddle shifters and lots of Brabus insignias bring the point home.