Commanding respect, immediately recognisable and immune to passing fashions. The Mercedes-AMG G 63 became an instant luxury icon. Any terrain is its canvas. So it’s time to get your hands dirty. This is our legacy, imagine our future.

Anyone so much as faintly interested about the sometimes beautiful, other time maddening world of automobiles probably heard a story or two about the four-wheel drive-premium SUV manufactured by Magna Steyr in Austria for Mercedes-Benz to brag about.

It’s very much a love and hate relationship, at times. After all, beauty is in the eye of the beholder, and not everyone will appreciate the boxy figure or the fact it can be as easily a vehicle that reaches the far side of the Earth (in any conditions) and at the same time the object of blind adoration across social media. It’s a statement of its transcending appeal across mediums and generations. 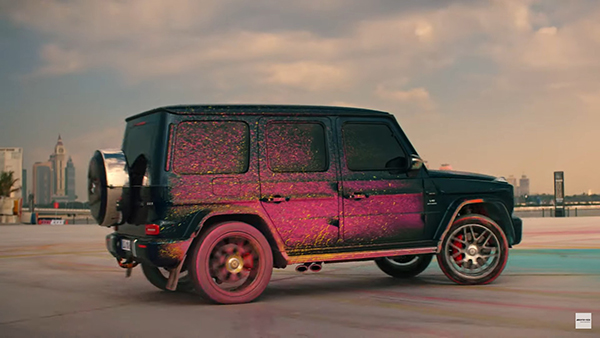 And it seems that Mercedes knows that very well. As such, here’s the Affalterbach-based Mercedes-AMG division looking to mesmerize both current and future owners, as well as fans of all ages, with their latest marketing stunt. It’s called “The Mercedes-AMG G 63 – Defying Physics, Outliving Time,” and it’s a clever way of reminding us that you can do just about anything, anywhere, with the great SUV.

This time around, it’s not something that fully requires its off-roading capabilities—even though we can’t say the 577-hp 4.0-liter V8 turbocharged engine or the all-wheel-drive system weren’t used at their full potential. Instead, we’re dealing with a full splash of color amidst a drifting session combined with a tire-marking work of art.

There’s also a conclusion to the rainbow color spectrum, as far as we’re concerned: the G63 went out of its way (sideways, on occasion) to appear in a work of art that spells the “AMG” letters. Granted, it probably didn’t achieve the cool signature while shredding the tires, but one can always imagine that it did.