Mercedes-Benz put together a V12-engined Geländewagen in 2002, a demonstrator that paved the way for the G 65 of 2012. Produced until 2018 in extremely limited numbers, the off-road luxobarge was discontinued over emissions regulations and the archaic motor.

A true collector’s car in every respect, the Mercedes-AMG G 65 Final Edition in the following clip used to retail at €310,233 (make that $366,910) when it was new. Only 65 examples were offered worldwide, and one of them has challenged the current-generation G 63 to a straight-line shootout. 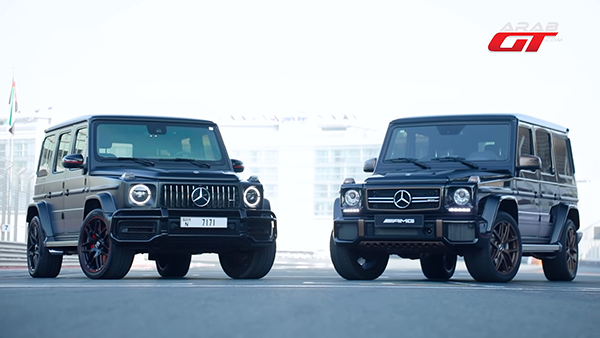 The G 63 Edition 1 in the following video also happens to be lighter at 2,460 kilograms (5,423 pounds) versus 2,835 kilograms (6,250 pounds). One weight-saving difference over the G 65 Final Edition is the double-wishbone independent suspension up front, which offers more precision and control than a solid axle on high-speed washboard surfaces and on the road.

Coming courtesy of ArabGT.com, the nine-minute-long video starts with a win for the G 65. The V12-engined model launches an idea harder off the line, and by the end of the long straight where the race takes place, it keeps that advantage by a nose. From a roll, the G 63 has the upper hand, but not by much. The second roll race also ends in victory for the G 63, which is currently available to order from $156,450 in the United States in America.