Mercedes-AMG G 63 is a unique luxury SUV that’s been in production for several decades. The G-Wagen only received a second-generation back in 2018, though Mercedes worked hard to make the new model retain the original’s rugged styling and capability. This is one of the only SUVs in the world that can conquer off-road challenges and look great in a Kardashian’s driveway. The AMG version offers 577 horsepower, making it crazy fast.

The Mercedes-Benz G-Class, or G-Wagen, has soldiered along since 1972, first as an actual piece of military equipment, and then as understated but exquisite transport to the people who wanted luxury with their off-road capability. It was most recently revamped in 2018, after 28 years of only gentle refreshes. The new G-Class, and this 2021 AMG G63 in particular, is better than ever before. But is it cool?

My wife calls it the douchewagen, and as she’s seen more of these growing up in her neighborhood than I did in mine, I’m tempted to agree with her. We’ve certainly seen our fair share of owners who neither relish the speed of these beasts nor their capability on dirt. The G is perfectly positioned to be a status symbol, but it would be a shame if that’s only what it ends up being known for. 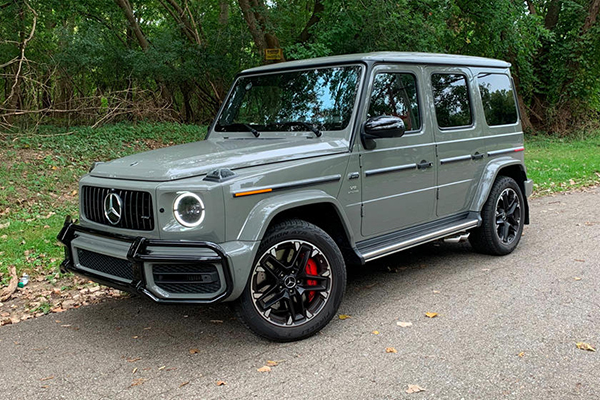 The Promise
It would be a shame for many reasons, starting with the engine. While the G550 sports the same 4.0-liter twin-turbo V8 as this AMG G63, it’s down 161 horsepower and 177 lb-ft of torque from the monster’s output of 577 hp and 627 lb-ft. It doesn’t sound as good as the old 6.2-liter, but its bellow still gives NASCAR vibes. The G63 gets a nine-speed automatic transmission and four-wheel drive with lockers in the front, rear, and center. Those differentials are controlled by three buttons on the dash for easy access when on a trail.

Its drive modes, which Mercedes calls Dynamic Select, feature the usual five on-road programs including Individual, Comfort, Slippery, Sport, and Sport Plus. To that it adds three off-road modes: Sand, Rocks, and Trail. Those new modes go along with its new independent front suspension and raised axles to make this new G even more capable than the Jeep-like, solid-axle predecessor.

The Delivery
On the road, the G-Wagen is fast and loud. Normally we’d say that’s cool. But it is a handful, especially when hustling down the freeway. The G63 is bouncy and feels stiffer than expected even in Comfort mode. High-speed lane changes require a steady hand on the wheel and an eye on approaching traffic. The steering is heavy.

We will give high marks to the strong brakes, which are needed with all of this speed and weight. And let’s not forget, this car has the aerodynamics of a brick flying through the air. That means any crosswind will take hold of this SUV and move it around in the lane. On the bright side, the high seating position offers a great view of what you’re trying not to crash into. 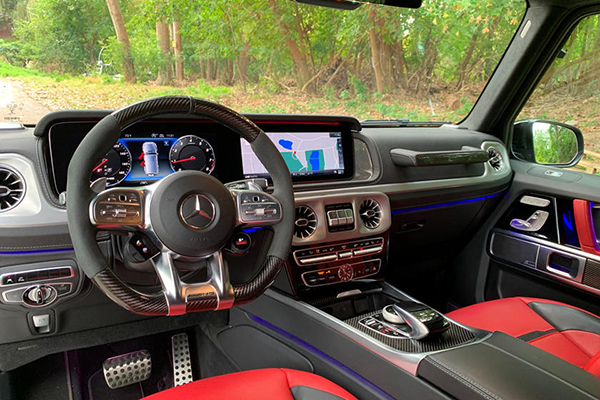 The Technology
The G-Class doesn’t yet come with Mercedes’ Hyperscreen, but it does feature two connected displays running from the gauge cluster to the center stack. It looks great and has a hood to block out stray sunlight so you can see it in the middle of the day. But it’s not a touchscreen; it’s only controlled by the rotary dial in the center. Don’t get us wrong, we’re okay with that type of control – especially with extra mode buttons around it – we’d just like a touchscreen too.

Additionally, the flat windows combined with the bright interior lighting throw reflections all over the cabin. To your left, you’ll see a second set of screens in the driver’s window. You’ll also see it in the passenger window. And sometimes when cars approach on the left, you’ll see their reflection in your right window and when they approach on the right, vice versa. When piloting this wagon, you need your wits about you. As much as we like ambient lighting, it doesn’t quite work in this box.

When we see this vehicle on the road, we think badass, fast, luxurious, and capable. That makes it cool. But we do agree that most owners and drivers are not the type we’d invite to our cabin for the weekend because they’re kind of douchey, which makes this a conundrum.

The carbon fiber wheel is cool, as is the Burmester sound system that made us silence our nasally podcasts for old-school hip hop. We also love the drive mode dial on the steering wheel and programmable buttons for exhaust, suspension, or whatever else you need to access quickly.

With all that in mind, and despite its faults, we’re still calling the Mercedes G-Class cool. It has too much power, too much capability not to be. Like with bad dogs, you don’t judge the dog, you judge the owner. We’re not sure why the G-Wagen attracts such owners, but we’ve now decided we won’t hold that against Mercedes and its excellent SUV.