The Mercedes-Benz EQS is already on its final leg of testing, and it won’t be long until it is unveiled to the public. So far, its maker has confirmed that the electric sedan based on the Mercedes-Benz S-Class will be launched this 2021 in Europe and in the US. As we wait for the arrival of the EQS pure electric vehicle, check out the five things that we know about it so far based on official announcements, hints from its maker, Mercedes insiders, spy shots, and rumors: 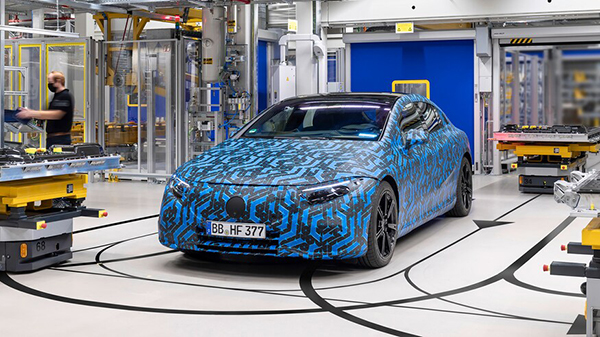 Faithful to Its Concept Form… Almost
Most of the time, the production version of a car ends up nothing like its concept. However, Mercedes boasts that the EQS will inherit most features shown in the Vision EQS. Although we have only seen the camouflaged version of the EQS, placing it side-by-side with its concept reveals that just a few changes were made to the production car for practicality’s sake.

First, the EQS will feature a more conventional seven-spoke wheel design as shown in the official teasers of Mercedes as well as large alloy wheels with blue details instead of its concept’s turbine-inspired design based on the recent spy shots of Motor.es. Second, the rear hatch of the upcoming car appears a bit bulkier. Mercedes probably intended to put more definition into its rear design or it’s simply intended to provide a better cargo room for the EV. Third, the production vehicle has a higher ride height compared to its concept. Among the other noticeable adjustments include the presence of side mirrors, door handles, and a B-pillar on the production model.

435-Mile Electric Range
Mercedes remains optimistic that the EQS will keep its targeted 700 km or 435-mile electric range based on WLTP cycle. On the other hand, many think that its 110 kWh battery pack might only deliver at least 300 to 350 miles. There are other battery variants expected in the model though so it is possible that one of them could keep up with the company’s promise.

More than 400 HP Output
The production EQS will likely live up to its concept’s promised 469 hp and 560 lb-ft of torque coming from a dual-electric motor setup. The numbers should allow it to sprint from 0-60 mph in under 4.5 seconds.

Level 3 Autonomous Driving
Aside from its S-Class level of technology and comfort elements, the EQS is expected to have at least a Level 3 autonomous driving capability. According to the autonomous driving classification of the Society of Automotive Engineers (SAE) International, a Level 3 offers “conditional automation”, which means that the vehicle can operate itself under ideal road conditions while the driver is engaged in other activities like using a mobile device, for example. The driver is still required to take the steering wheel in some instances like when the car is going more than 60 km/h or during crucial moments.

Same Price as the S-Class
When it goes on sale in the second half of 2021, the EQS will possibly get the same price tag as the S-Class. With that, look forward to at least a $90,000 starting price for the EV.