Mercedes-Benz EQS has the potential to shake up the luxury sedan market and Jay Leno recently had the opportunity to check out the innovative EV.

During the video, Leno spoke with Sylvain Wehrnert, the vice president of design for Mercedes-Benz North America. The EQS is the automaker’s first luxury EV built from the ground up and acts as a rival to the Lucid Air and Tesla Model S, even though the Tesla has a greater focus on performance and isn’t as luxurious. 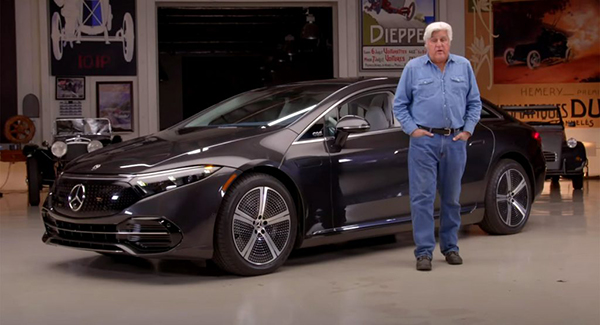 As Wehrnert is a designer, much of the review focuses on the exterior design of the car which Mercedes tried to make as aerodynamically efficient as possible, helping it to slice through the air. Leno and Wehrnert then head into the cabin of the EQS where we get an overview of some of the intriguing features found in the 56-inch Hyperscreen that encompasses the entire dashboard. Admittedly, Leno does seem a little confused about the need for some of the features available through the Hyperscreen but as a piece of design, it is quite incredible.

Towards the end of the review, Leno heads out onto the road to drive the EQS. During the review, he reveals that he had the car for four or five days, giving him plenty of time to get familiar with it. He says it is fast and drives beautifully and refers to it as the first all-electric purpose-built luxury car.

Pricing details for the EQS haven’t been announced for the U.S. market yet, but a couple of months ago, it was confirmed that buyers will receive two years of complimentary charging at Electrify America stations.