At last, it’s a bespoke electric Mercedes. That’s what the EQS is: all-new. Not an electrified S-Class, but an S-Class sized luxury saloon riding on a new platform big enough to contain a massive 107.8kWh battery in its enormous wheelbase. It’s a five-metre long riposte to all the EV newcomers. Mercedes is here for the new era, and it’s thrown everything it’s got at this flagship. The official claim is a monstrous 454 miles of maximum range. But how far can it really go on a full charge? Well, we sent Top Gear Magazine’s Ollie Kew on a wee trip from Edinburgh to London to find out.

Mercedes-Benz EQS review: how far can it go on a full charge? | Top Gear

When it was unveiled, the Mercedes-Benz EQS wowed with its massive 107.8 kWh battery pack that promised high-performance and long-range. But how far can it really go?

Top Gear has decided to find out with an island-spanning trip that takes host Ollie Kew the 400 miles (644 km) from Edinburgh Castle in Scotland to Buckingham Palace in London, England.

The trip is a long one, to be sure, and maybe surprising for American customers whose EQS currently tops out at 350 miles (563 km), according to the Environmental Protection Agency. There are more options in the U.K., though, and the WLTP tends to be a little optimistic about range. That means that the car driven by Kew is rated at 484 miles (779 km). 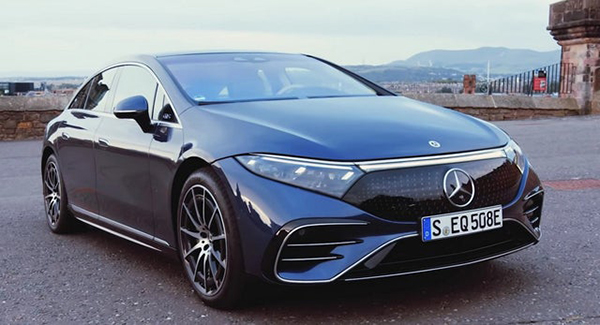 Kew maintains, though, that he has no interest in hypermiling, nor in living without the luxury car’s many amenities. That means that he ran the test at reasonable highway speeds, rather than following the speed limit precisely. It also means that he used the air conditioning and the seat massagers in this test that was run in the summer.

All of which reduces the real-world range a bit and makes his in-car GPS pessimistic about his odds of reaching his destination. Helping him along are the traffic, which tends to help EV ranges, and Mercedes’ technology, which makes the regenerative braking eerily intelligent and the routing optimized for efficiency.

In other real-world tests, these features have been helpful. In America, an EQS 450+, though rated at 350 miles of range, managed to travel 422 miles when driven by Edmunds. That made it the longest-range EV ever driven by the publication.

Can a Top Gear host with no interest in efficiency recreate either the WLTP’s range estimates or Edmund’s findings?