Mercedes-Benz is giving us part of the EQS picture today by revealing the interior design and dropping a few intriguing details on the exterior. The headline is what you’re looking at above. That dash, termed the “Hyperscreen” by Mercedes, is the key to this interior. We saw a photo of the dash back at CES, but now Mercedes is showing us what it looks like when integrated into the EQS’ interior. 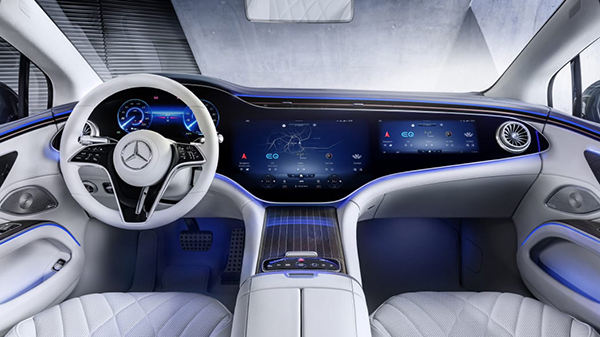 Mercedes has confirmed more details on the design and interior technology of the new EQS, ahead of the car’s scheduled launch on 15 April. The EQS will act as the pure-electric alternative to the seventh- generation S-Class, rivalling the likes of the updated Tesla Model S and Audi e-tron GT.

Unlike Mercedes’s combustion-engined flagship saloon, the EQS features a cab-forward design, as less space is required up front for the powertrain. Mercedes says this has increased the amount of cabin space, which should provide a little extra comfort.

The EQS was also designed to be as aerodynamic as possible, to eke the maximum amount of range out of the battery pack. So, the roof was shaped to follow a single bow-like line, the radiator grille can be shuttered and the EV’s undertray is completely flat to minimise drag. The result of all this is that Mercedes claims a drag coefficient of just 0.20Cd.

Inside, the EQS features Mercedes’s new Hyperscreen infotainment system. It’s a 55.5-inch (or 141 centimetre) curved unit, which combines a digital instrument cluster, central media screen and climate controls on a single glass panel. There’s also a media screen on the passenger-side dash, which displays digital art when the seat is unoccupied.

Mercedes has tried to make its MBUX Hyperscreen as easy as possible to use, eliminating the current system’s reliance on a menu screen. The firm says that the system’s most important functions will be accessible from the home page, the selection being automatically tailored to the driver using the car’s artificial intelligence programme. 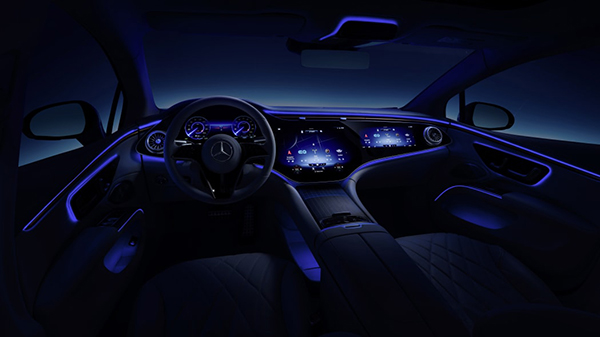 Buyers also get a Burmester surround sound system, which comes pre-loaded with two “sound experiences” which Mercedes says will provide some background noise to fill the void left by the lack of an internal combustion engine.

Mercedes has also fitted its latest cabin air filtration system, which prevents fine dust, pollen and microparticles from entering the interior. There’s a new charcoal filter, too, which can sift out contaminants such as sulphur dioxide and nitrogen oxides. 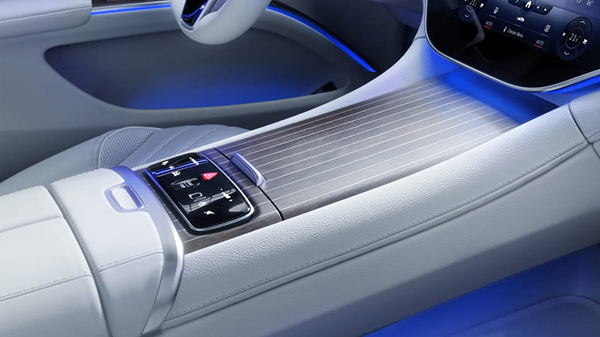 This technology feeds into Mercedes’s latest Energising Comfort cabin ambience system, which adjusts the climate control, lighting, background music and interior fragrance to suit the driver’s mood. It’s possible to choose from three programmes: Forest Glade, Sounds of the Sea and Summer Rain. The first setting plays birdsong and the sounds of rustling leaves through the stereo system and pumps a forest fragrance through the air vents.

The second plays wave and seagull sounds through the stereo and blasts cool air from the air conditioning system in sporadic bursts, while the final option plays the sound of distant thunder and pattering rain.

Mercedes has even added a soundscape which can supposedly help the driver recover more quickly during a break in their journey. Called “Power Nap,” it claims to create a sleep friendly atmosphere, by reclining the driver’s seat, drawing the roller blinds and adjusting the climate controls.

The function even has a dedicated wake-up programme, which activates a subtle seat massage and ventilation setting. A unique fragrance is also circulated around the cabin and the seat is automatically raised back to its upright position. 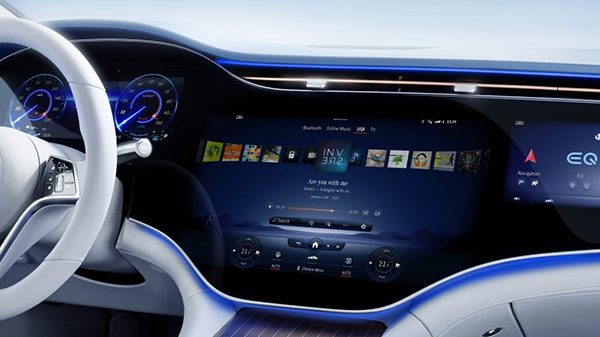 MBUX Hyperscreen: AI and automated functions
Mercedes has tried to make MBUX Hyperscreen as easy as possible to use, eliminating the current system’s reliance on a menu screen. The firm says that the system’s most important functions will be accessible from the home page with artificial intelligence used to select them.

The EQS’s AI software can learn the driver’s habits and automatically perform their favourite functions. For example, if the owner regularly calls one of their contacts while driving home on Tuesday evenings, the infotainment system will display a prompt at the appropriate time.

What’s really clever, though, is the system can recognise the person driving the car using its interior camera and store information on up to seven people’s driving habits. So, if someone else is driving the EQS on a Tuesday evening during the ritual phone call time period, they won’t be shown the prompt.

The new MBUX infotainment system also has 24GB of RAM, which is six times more than the average home computer. The screen features a light sensor, too, which automatically adjusts the brightness of the screen according to the time of day. 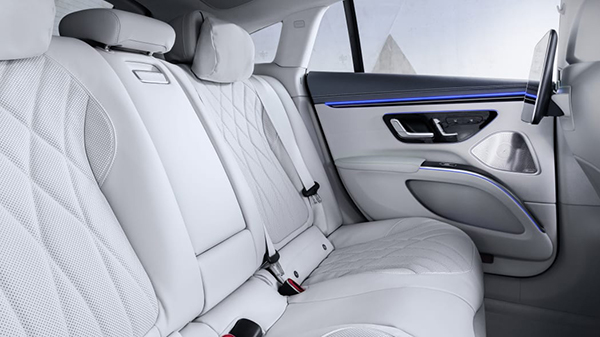 New 2021 Mercedes EQS: chassis and powertrain
Specific details about the Mercedes EQS’s platform and powertrain are yet to be confirmed, but they were previewed by the EQS Vision Concept from the 2019 Frankfurt Motor Show.

The concept car’s electric motors and battery pack were mated to a sophisticated charging system, which offers support for the latest 350kW fast-chargers. That would see 350 miles of range added in less that 20 minutes, which is a huge leap towards making electric cars genuinely usable over long distances.

Markus Schafer, Mercedes’s head of research and development, recently described the EQS as something “completely different” to the brand’s current line-up. He also said the EV saloon would enter production in summer this year, at the company’s new Factory 56 facility in Stuttgart, before first deliveries arrive in the second half of 2021.