Mercedes-Benz built two levels of rear-wheel-steer capability into its new EQS battery-electric sedan. The first turns the back wheels up to 4.5 degrees, the second increases the maximum angle to 10 degrees. Every EQS is built with the hardware to achieve ten degrees, the sedan’s software and options sheet in some countries determining whether the back tires don’t rotate at all or rotate to their mechanical limits. In the U.S., the 10-degree arrangement will come standard. In some other countries, like Mercedes home field of Germany, the 4.5-degree and 10-degree trims need to be optioned when buying. German outlet Auto, Motor und Sport reports (translated) that the 10-degree system can be purchased after the sale as an OTA update, but Mercedes will charge “an an annual fee of 489 euros ($571 U.S.),” or if an owner wants to pay for three years up front, 1,169 euros ($1,376 U.S.). 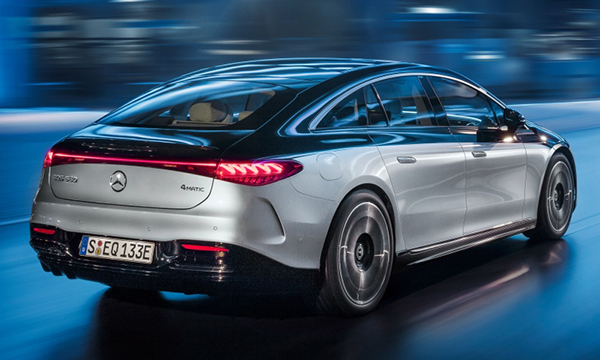 We don’t see this being an issue initially; we don’t know yet how much the EQS, but it’s going to be spendy, and we don’t expect owners to howl over an option that might cost a tiny single-digit percent of the purchase price. On the configurator for the new S-Class on Mercedes’ German web site, the 10-degree steering runs 1,547 euros up front and requires the 360-degree camera option, another 1,130 euros, for 2,677 euros in total ($3,151 U.S.). For context, the base S-Class offers exterior colors that cost nearly double the price of the 360-degree camera and ten-degree rear steering combined, the Maybach models offer paints that cost seven times as much. So we’re not talking a lot of money for a certain buyer.

The AMS report doesn’t make clear if the charge carries on in perpetuity. It strikes us as outrageous to think it would, but hey, the world is full of outrageous things at the moment. There’s also the fact that, going back to the S-Class as an example, the EQS could end up heavily skewed to buyers who lease or simply don’t hold onto the same vehicle for long, so they could quickly correct their option omission. We’ll know more after the EQS goes on sale and owners who skipped checking some boxes decided to request the feature. They might end up beginning their requests with, “Warten Sie eine Minute…”