The E-Class is currently one of the oldest products in the model range of Mercedes-Benz. Launched in 2016, the W213 was facelifted last year but soon the mid-size sedan (and wagon in some markets) will be retired. Its successor is already under development and a new prototype was recently caught on camera showing glimpses of its interior for the first time.

This heavily camouflaged test car doesn’t reveal much of its exterior design but we know from previous occasions that it will feature an evolutionary styling compared to the outgoing model. At the front, there are slim LED daytime running lights also doubling as turn signals, while it looks like the headlights wrap around the corners despite being hidden under camouflage. The rear end doesn’t seem to be aggressively shaped and will most likely follow the same design recipe as the current C-Class. Those black alloy wheels look too generic and we’re not expecting this set on the production model.

For a very brief moment, the new E-Class reveals its interior to the camera. The only available shots are from a large distance, though we are able to see the dashboard which – just like on the current model – will be dominated by a large display, likely incorporating two screens under one glass. Technologies from the flagship S-Class could be introduced to the smaller E-Class, including new driver-assist features. 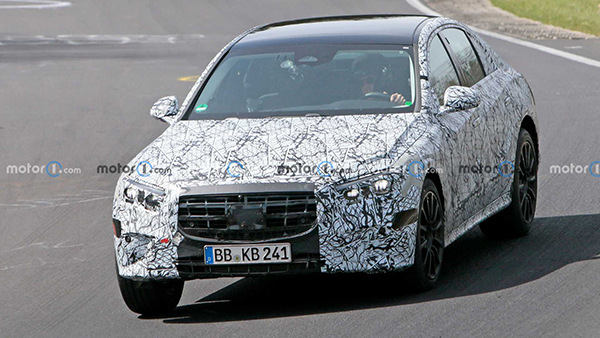 The core of the engine range will come from mild-hybrid turbocharged gasoline and diesel engines, depending on the market. We captured a plug-in hybrid prototype testing earlier this year, and we expect at least one PHEV option to be available. Unfortunately, the days of the V8-powered E-Class seem to be numbered as there are rumors that the next-generation AMG models won’t feature eight-cylinder engines. If you want an E with a V8, you have to hurry up as Mercedes-Benz is now selling the AMG-branded E63 S Final Edition in limited numbers.

We don’t have a launch date for the new E-Class, though we expect it to arrive before the year’s end or early next year.