The driver of this Mercedes-Benz E-Class should be thanking their lucky stars that they aren’t injured or didn’t seriously damage their car after a frighteningly close call on a highway in Taiwan.

Mercedes-Benz E-Class Does 360-Spin After Aquaplaning

Footage of the near-miss was recently shared to YouTube after appearing to have been initially posted to TikTok. It was filmed from the dashcam of a car traveling in the right lane of the highway when the white E-Class comes into few speeding in the left lane. Heavy rain is falling and the conditions are far from ideal.

Before long, the Mercedes-Benz starts to aquaplane, most likely after hitting a puddle, and begins to violently slide to the right. It spins around a full 360 degrees before coming to a rest in a turn-off from the highway just a few yards away from a crash barrier. The driver can be seen slowly driving away after the close call. 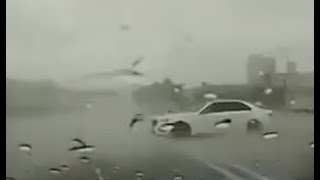 Avoiding incidents like these isn’t difficult. All you need to do is slow down while driving in heavy rain, particularly along roads where the water can easily pool, forming large puddles. Ensuring your tires have plenty of tread left is also important.