Given that the facelifted version of the Mercedes-Benz E-Class was only introduced in 2021, we’re not expecting the automaker to release the next-generation model soon. However, that doesn’t mean that Stuttgart couldn’t care less about its midsize sedan. Spotted several times before, another E-Class prototype has been spied while waiting at a red light in Germany, courtesy of YouTube’s walkoARTvideos.

The Mercedes E-Class prototype that we’re seeing on the video atop this page is largely similar to the one we saw at the Nürburgring back in April. Still heavily concealed, the sedan does provide little clues about the changes employed by the German marque.

The spy video above provides a close look at the upcoming sedan’s details. The LED daytime running lights above double as turn signals, while it looks like the headlights wrap around the corners despite being hidden under wraps. The grille and front badge are disguised for now, though we can expect some air inlets on the lower bumper, also hiding under the camouflage. The black alloys look generic, though, so we’re not expecting this set on the production model.

On the sides, only a few character lines are apparent through the wraps, though the proportions are clear – there is a short rear deck, while the tailpipes aren’t visible. Most of the taillight elements are hidden away from prying eyes. 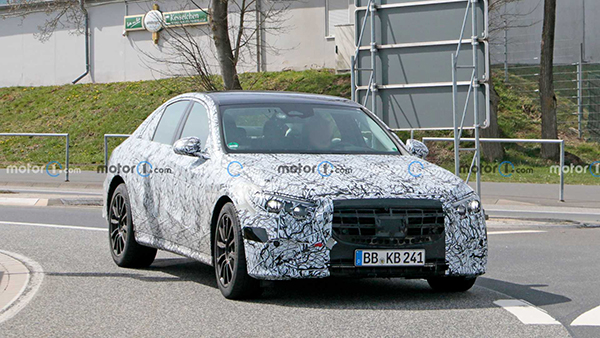 There haven’t been spy shots or videos of the next E-Class’s interior, though we can expect niceties from the S-Class to trickle down to the midsize model. This means more screens and more driver-assist features are coming our way.

Meanwhile, powertrain details are scarce at this point. A plug-in hybrid has been spotted before, though mild-hybrid turbocharged gas and diesel versions are also expected. The high-end AMG variants will likely get electrically assisted, turbocharged four-pot powertrains.

The next-generation Mercedes-Benz E-Class is expected to debut towards the end of 2023 or even in early 2024.