The next Mercedes E-Class is coming in 2023, and at a time of all-electric rebirth for the German brand, it will set out to prove that Merc’s combustion-powered favourite is still an important model.

It will hit UK roads in the second half of next year, beating the next-generation BMW 5 Series to market. However, while its rival will come with an all-electric option alongside its combustion and hybrid drivetrains, the E-Class will stick with 48-volt mild-hybrid petrol and diesel engines, plus plug-in hybrid power. Instead, Mercedes’s electric EQE saloon will line up as the E-Class’s EV stablemate.

New E-Class development prototypes have been spotted on public roads in Europe, as Mercedes gears up to replace one of its most popular and iconic models. The nameplate has been around for nearly 30 years as Mercedes’ executive saloon, and although sales of these models are declining in favour of SUVs, this is still Merc’s best-selling four-door, representing 16 per cent of the brand’s business in 2020, with more than 300,000 sales in a year of huge global uncertainty.

The development cars we’ve spotted weren’t wearing much camouflage, and there’s a reason for that. The new E-Class’s styling won’t mark a radical departure from the brand’s latest C-Class and S-Class.

New horizontal tail-lights, smoother surfacing, a more upright nose and styling touches such as flush, pop-out door handles will be carried over for the new E-Class. Our exclusive main images give a preview of what’s to come from the two-model line-up, consisting of a saloon and an estate. It’s understood that the E-Class Coupé and Convertible models won’t be continued, with the arrival of a brand-new CLE set to cover those bases.

Our spies haven’t seen inside the new E-Class’s cabin yet, but, as with the exterior makeover, the interior will receive an overhaul that will centre around a new portrait-orientated touchscreen system rising out of the centre console, again similar to the C-Class and S-Class. The style will become uniform across the brand’s three saloons, but the technology powering the screens will not. 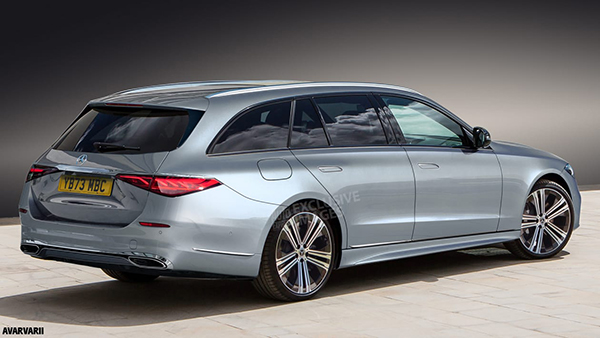 The C-Class and S-Class differ in terms of the display sizes they offer and the technology behind them. The E-Class is likely to come fitted as standard with the 11.9-inch display that’s optional on the C-Class, with the 12.9-inch OLED panel from the S-Class featuring haptic feedback on the options list. Expect a fully digital dash to feature as standard, with 3D instruments available. The E-Class should also offer similar head-up display and semi-autonomous driving aids to its larger sibling, although these will also likely be offered as optional extras.

Much of this new cabin tech will be made possible by a move to the Mercedes MRA2 platform; this architecture will allow the E-Class to make a big leap forward when it comes to electrification.

Expect range-wide availability of 48-volt mild-hybrid power. Every diesel and petrol version of the new E-Class will support this technology, but a new plug-in hybrid model with significantly more electric range and improved efficiency will be the biggest draw, using the battery and motor tech from the S-Class. A new E 300 e will team a 2.0-litre turbocharged petrol unit with this new tech, enabling a range of more than 60 miles on battery power, and company car tax-busting Benefit-in-Kind rates.

What AMG has planned for the new E-Class is still unknown, although high-performance versions of the next model will arrive a little while after the core saloon is launched. The next AMG C 63 will move to a new plug-in hybrid four-cylinder set-up producing up to 600bhp, but sources in Germany suggest that the next E 63 could retain the brand’s trademark twin-turbo 4.0-litre V8, offering more than 650bhp and 4MATIC all-wheel-drive.

When it comes to the chassis, the new C-Class has dropped air-suspension from the options list, but the E-Class is unlikely to follow suit. As with the larger S-Class, it will also be offered with a new rear-wheel steering system. However, it won’t deliver the same capability as the brand’s flagship limo, which can turn the rear wheels by as much as 10 degrees in the opposite direction to the fronts to improve agility.