Rarity in the Canadian market plus exchange rates mean the E55 wagon is better off being imported from Japan versus the neighboring states down south.

It is arguably the most desirable AMG ever made. OK, it’s the most desirable attainable AMG. We’re talking about the E55 AMG wagon. It has the epic M113K Supercharged V8 motor and the indestructible 722.6 transmission. It stands in defiance of the old saying for cars; “fast, cheap, reliable… pick two.” The W211 E55 is the stuff of legends. And the E55 wagon takes that epic car and cranks it to 11. But there’s a bit of a problem if you live in a country with a maple leaf flag. It’s almost impossible to find one.

YouTubers “TheStraightPipes” managed to get their hands on one though. And while you might think it’s easier to just source one from the yankees down south, you run into some issues. “When these pop up for sale, which is very rare, they are about $30,000-$40,000 US dollars… So the rarity, availability and actual price of them in North America is what drove me to look in Japan.” 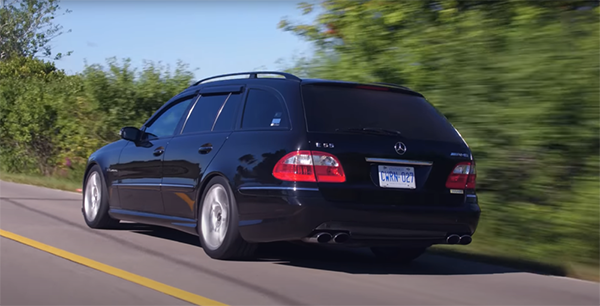 It makes sense then that the market for German car exports from Japan isn’t particularly hot. And as such, cars like these don’t go for a premium. And that does account for the fact this car does have about the equivalent to 110,000 miles. But as we all know, that’s really nothing for these cars. Interestingly though, this generation of E55 is slowly but surely appreciating in value. Just recently, extremely clean examples have been going for much higher values than in a few years prior.

In the video, specific options for the car are mentioned, which means if you really want to get nerdy about the rarity of your car, you can claim yours is one of three with black on black without keyless go and with a sunroof and with the upgraded stereo. Presumably, there’s a one-of-one example out there. If you’re a buyer already in the US, your hardest amount of work is waiting till your one-of-one example pops up for sale. But you better buy one now before that value spike really hits.