While the selection of US-market station wagons was dwindling rapidly as the 21st century approached and SUVs took over, car shoppers looking for new ’99 wagons still had a few interesting choices when looking for a good-sized cargo hauler that wasn’t a truck or truck-influenced. Honda had axed the Accord wagon over here after 1997, Toyota USA gave up on the Camry wagon the year before, while Nissan and Mitsubishi had ditched the Maxima and Diamante wagons on our shores after 1989 and 1995, respectively. Subaru was still in the early stages of its impressive (and ongoing) sales run with the Legacy Outback wagon at that point, while Ford sold the Taurus/Sable wagon all the way through the 2005 model year. BMW still offered the 5-Series wagon then (with another decade to go), but our 1999 wagon shopper had to look to Mercedes-Benz and Audi for a European estate with all-wheel-drive. Here’s an example of Stuttgart’s A6 Avant Quattro fighter, now residing in a Northern California self-service yard. 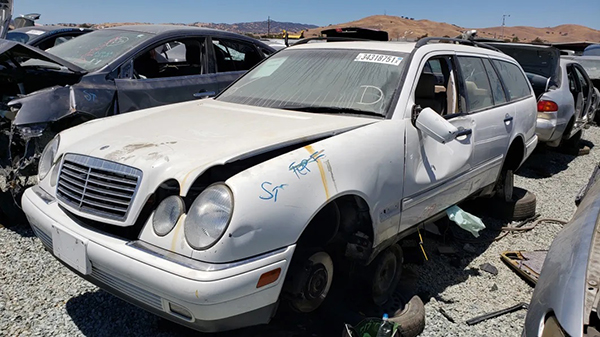 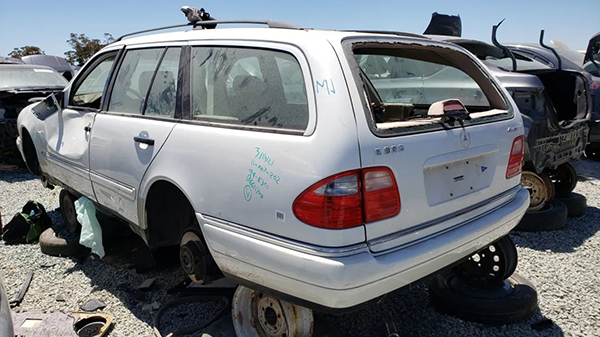 The US-market E320’s engine for 1999 was this 3.2-liter V6, rated at 217 horsepower and 229 pound-feet. That beat the A6’s 200-horse 2.8-liter V6 and blew away the Outback’s 142-horse boxer-four (though you could pay extra for a 165hp version). A five-speed manual transmission was available elsewhere in the world, but American W210 buyers had to get the automatic. For diesel fanatics, the E300 sedan was available (no wagon version here, sorry).

The interior is done up in leather, and the VIN tells me that this color combination was known as “Mushroom/Quartz/Pebble” in 1999. It appears to have been in good shape, prior to the depredations of heavy-handed junkyard shoppers. 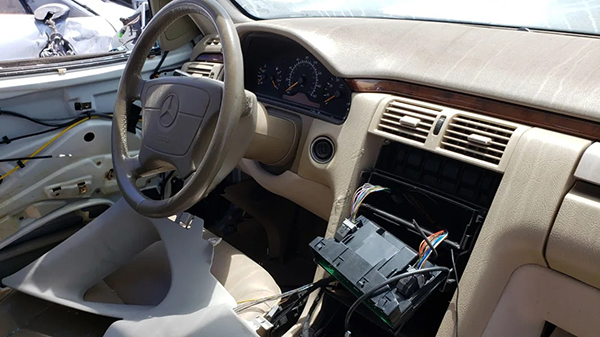 The body and its Neve White paint got banged up in what looks to have been a multi-car fender-bender or an incident involving being mashed into other cars while parked. The airbags didn’t fire, but this kind of damage wasn’t worth fixing on a 23-year-old E-Class.

You can still get a new E-Class wagon, though it’s not really a wagon (according to my annoyingly strict definition).