It’s fair to say the Mercedes-Benz E-Class sets the benchmark for prestige and luxury in the market it finds itself in. With the BMW 5-Series as the drivers’ choice, the Lexus ES occupying the quirky left field and the Audi A6 somewhere in between, the segment’s often classified by how clever its cars are. 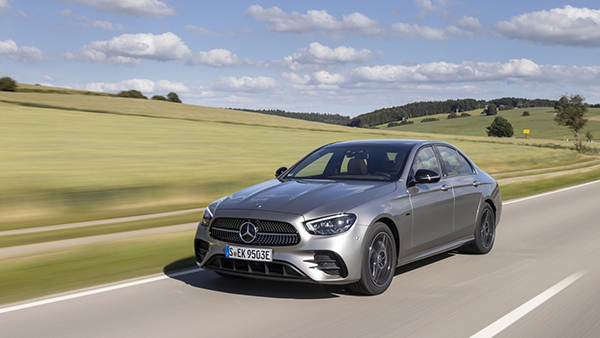 When the current E-Class launched in 2016, it rocketed to the top of the tech tables by virtue of its sophisticated driver assistance tech. Now a few years on, Merc’s upped its game and brought a little of the fashionable A-Class into this larger sector – fine-tuning the E’s infotainment and interior offerings while treating the exterior to a sleek, new-but-familiar look.

The most important question to ask is, has it worked – or does it take away some of that luxurious, effortless feel that’s so vital to the E-Class’s character?

We’ve tested the new 2021 Mercedes E300e plug-in hybrid on UK roads to find out. Read on for our full review.
Something’s off about that front end…

What’s happened is that Merc’s essentially flipped the E-Class’s grille upside down. Now wider at the bottom than it is at the top, it wrestles the car into line with the A-Class and its sister models as well as the majority of the brand’s SUV range.

It’s much less gawky in the metal, appearing lower and sleeker than its predecessor. While our friends on the Continent will be offered Mercedes’ traditional grille with an upstanding bonnet ornament, the ‘sportier’ badge-in-grille is the only front end we get in the UK this time round, so you’d better get used to it.

A similar A-Class makeover is to be found at the rear, where wider, sharper taillights now flow onto the boot lid. Subtle but effective. Both head and taillights are full LED as standard and provide what is some of the best illumination you’ll find at any price.

As for the E-Class’s interior, it’s likely you’ll only notice three changes. First, the analogue clock has gone – boo… Second, the centre console-mounted touchpad interface found elsewhere in Merc’s range has replaced the weird scroll wheel/touchpad hybrid found previously in the E-Class. And third, there’s a new steering wheel with capacitive thumbpads, available in two flavours depending on specification. 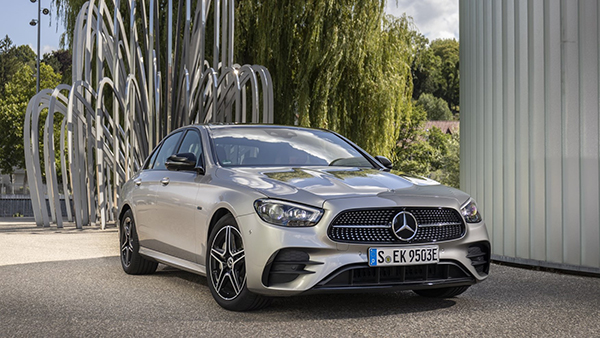 Is it still as wafty to drive as ever?
Without a doubt. We’ve tested three new E-Class models: the 300d diesel, 450 petrol and 300e plug-in hybrid. It’s the latter that provides the most convincing luxury solution, with a full charge providing around 20-30 miles of eerie, totally silent electric running.

Mercedes’ hybrid system is one of the most seamless we’ve encountered in this class, even more so than Lexus’s and its constantly-shuffling hybrid synergy drive. In fact, the 2.0-litre petrol used in the 300e is so well isolated that unless you’re looking at the rev counter, it’ll take a minute to figure out if the engine’s even spinning.

A combined 316bhp and massive 516lb ft means performance is suitably rapid when needed – especially right off the line, where instant electric torque fills in the gaps left by the petrol motor (assuming the battery holds some charge, of course). Progress around town is as effortless as you’d hope, in whisper-quiet EV mode.

Faster roads do show this isn’t a drivers’ car in the same way as a 5-Series. The E-Class – especially in hybrid form – feels heavy, and pillowy comfort rather than razor-sharp response is the order of the day. Best to leave it in Comfort mode and let the dampers and steeering relax a little.

The E300e steers and corners in a stern, unflappable kind of way – it’ll take the bends and doesn’t roll about or dive under braking, but you won’t be rewarded for driving in a manner that tests these limits. The same can be said of the Sport driving mode; sure, it exists, but why would you bother?

Save the heroic stuff for AMG models and use the standard E-Class as it’s meant to be – as a fast, quiet autobahn cruiser. Certainly there are few more relaxing ways to tackle even a British motorway, wrapped up in Energising Comfort seats (emphasis on comfort, not so much on energising) and enjoying, if specified, the fantastic Burmester stereo. It’s certainly an option box we’d be ticking. 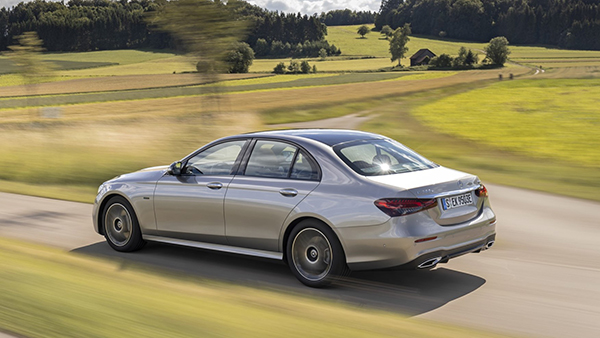 What are the other E-Class engines like?
The 300d diesel – which will play second fiddle to the hugely popular 220d in the UK – is powerful and torquey. It’s only a four-cylinder and sounds like it with a gravelly note at idle.

It’s totally sensible and totally dull, but will appeal to company car drivers and private motorists with its appealing fuel consumption and CO2 figures.

The 450 petrol, on the other hand, is one of Merc’s latest straight-six units, and it’s a peach. You’ll pay a steep price (around 25mpg) for it, but in return you get silky-smooth power right up the rev range and a great noise as an incentive for exploring it.

All three of these engines are hooked up to a nine-speed auto best described as unobtrusive. Changes are possibly a little slushier than in the equivalent A6, but take control with the paddles and you won’t be pining for more response. And it doesn’t hesitate on roundabouts, which is a massive plus. 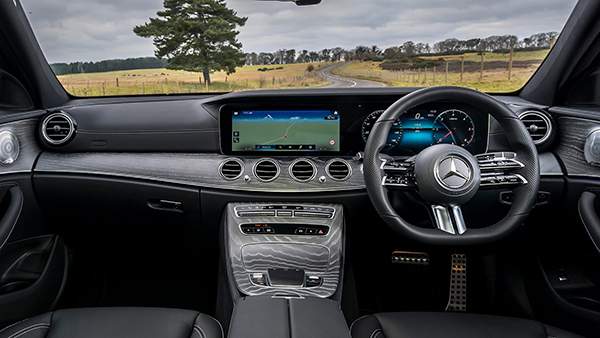 What’s new inside the 2021 Mercedes E-Class interior?
Even the very base E-Class now comes as standard with a pair of 10.25-inch displays under a single sheet of glass, though moving further up the range brings even larger, 12.3-inch items. They look fabulous, and run the latest MBUX operating system for the first time.

As part of the transition to MBUX the centre console now houses a large touchpad controller instead of the scroll wheel that came before. This isn’t bad at all – it’s much more intuitive to use than Lexus’s equivalent, and navigating the interface is pretty quick and straightforward. Surprisingly so, in fact, given the huge array of tech on offer.

The central screen’s also touch-enabled in case you can’t be bothered to scroll around. Plus MBUX brings with it clever voice-activation tech and augmented-reality navigation, both of which work well – so you can twiddle, swipe or shout at your car’s infotainment to control minor functions.

What doesn’t work so well are the new steering wheels. There are two available – a flat-bottomed AMG one for, you guessed it, AMG and AMG-Line cars, and a round one for cooking models.

We’d call them button-fests, except many of the controls are capacitive and touch-sensitive. There are two four-way scroll pads for navigating the instrument panel and infotainment screens respectively, and they’re just plain difficult to use on the move, as they fail to respond to many inputs made by various of our testers. Bring back physical steering wheel buttons, we say!

Everything that’s carried over is still wonderful, though. There’s loads of room for rear passengers (though boot space in the hybrid is severely limited by the battery), build quality is top-notch and everything feels luxurious to the touch. Tick, tick, tick. 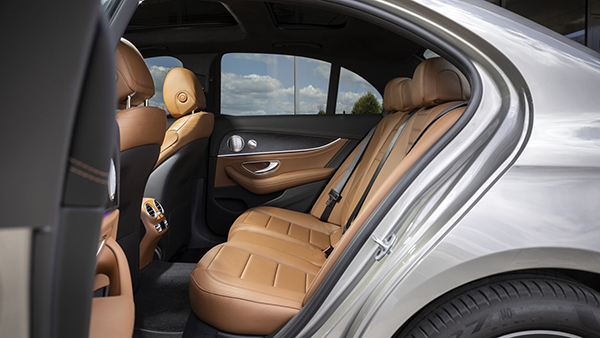 Does the driver assistance tech work?
Better than ever. Those new steering wheels may be rubbish to use but they now feature capacitive touch sensing. This means that you no longer need to give the wheel a wiggle to prevent the car from thinking you’ve nodded off – it detects your hand on the rim.

Standard-fit AEB is par for the course but there’s also Active Speed Limit Assist – which uses map data, traffic signs and even the sat-nav route to adjust the speed limiter appropriately.

The E will drive itself in traffic jams at speeds of up to 37mph, there’s a tracking app to help out if the car gets stolen, and the blindspot monitors work even with the engine off in a bid to prevent you clouting any passing pedestrian or cyclist when you open your door.

The end result is a suite of tech that has a tendency to make rival systems feel like a clumsy mess. You might not personally enjoy semi-autonomous systems, but if you do Mercedes-Benz’s system is among the best you can get right now – and it works wonderfully.

Verdict
Large executive cars like this are constantly playing catch-up with each other, but despite what outwardly appears to be quite a modest facelift for the 2021 model year, Mercedes-Benz has given its rivals something to think about. Existing E-Class owners might baulk at the style (though to these eyes, it’s less offensive than the latest 5-Series or A6 grilles) but they’ll enjoy the same superb comfort and refinement they’re used to.

Improvements to infotainment and driving tech are welcome, and the revised engine range is – so far at least – nothing short of excellence. A BMW might be more engaging, but we’d struggle to look past the E-Class as a daily driver.