After more than 15 years of documenting interesting vehicles I spy in car graveyards, I know which of those vehicles are most likely to show astronomical readings on their odometers: Honda Accords and Mercedes-Benzes. In my personal junkyard-odometer Top Ten, a Volvo 240 leads with 631,999 miles and a car needs to beat 411,794 miles to break into the list at all. 1980s Mercedes-Benzes have three of those spots, 1980s Honda Accords own three more, Volvo has two total, and Ford and Toyota have one apiece. Today’s Junkyard Gem falls short of this list, but it’s still noteworthy for being a gasoline-engined Mercedes-Benz W124 in nice condition despite the average of 10,525 miles it traversed during each of its 33 years on the road. 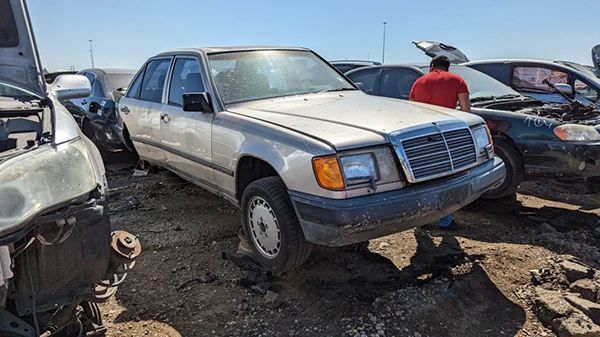 Keep in mind that most manufacturers held onto five-digit odometers into the 1980s and often (in the case of Detroit) into the 1990s, and then just about everyone went to unreadable-in-the-junkyard digital odometers around the turn of the century. That means that I’m sure I’ve documented plenty of American pickup trucks, Toyota Coronas, and old Mercedes-Benz diesels with well over a half-million miles on five-digit odometers that turned over the 10,000s digit from 9 to zero a half-dozen times. Still, getting past 300,000 proven miles is quite an accomplishment.

The folks in Stuttgart weren’t using the E-Class designation when this car was built (that came later, in 1993), but that’s what we’ve got here. The “E” in this badge refers to Einspritzmotor, for fuel injection.

The W124 sedan replaced its legendary W123 predecessor starting in the 1985 model year, with production continuing through 1995. The W123 was a hard act to follow, thanks to its famous toughness and reliability, but the W124 was well-built has its rabid aficionados today. 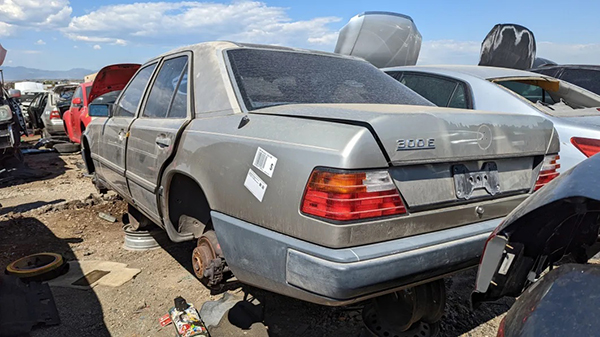 If you wanted a new US-market Mercedes-Benz with a manual transmission in 1989, your only choice was the proto-C-Class 190E. A four-speed automatic was mandatory on the ’89 300E here.

The factory-issue first aid kit is still here, though junkyard shoppers have rummaged around in it. 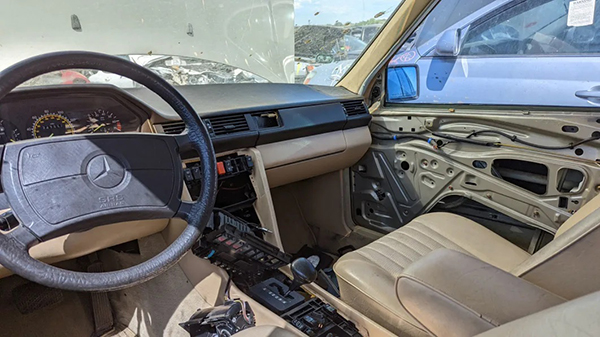 The interior looks to be in very nice condition, minus some stuff removed by junkyard shoppers. This MB-Tex faux-leather upholstery is indestructible.

The body looks good, too, but a close-as-makes-no-difference 350,000-mile car is a tough sell. Here it sits.