In Albania, every third registered car is a used Mercedes, like the one Luan Nina owns. He has been working as a taxi driver for fifteen years, and has driven this 30 year old Benz more than one million kilometers. No wonder they love German cars in Albania, they seem to be built like tanks!

There is a 30-year old Mercedes-Benz taxi that has covered almost one million miles. The veteran sedan drives in an Albanian city in Europe and still has the original engine under the hood.

It is a W124 Mercedes-Benz E200 that rolled off the assembly line back in 1993. That was the year the story of the E-Class started. That hood covers a 2.0-liter four-cylinder diesel engine with 136 PS and 190 Nm. The power unit delivers resources to the rear axle via a five-speed manual.

The sedan was far from being a road runner. It took 11.5 seconds to cover the time from 0 to 100 km/h (62 mph) and had a top speed of 200 km/h (124 mph). Almost thirty years later, the Mercedes-Benz taxi from Albania is probably inching even further from those figures. But it has quite a story to tell the grand-grandchildren bearing the EQE moniker.

The model arrived in Albania when new. It came from its homeland, Germany, and started its taxi part 15 years ago, in the hands of Luan Nina, now 70 years old. Together day in, day out, on the street of Durres, a city on the coast of the Adriatic Sea and a very popular destination in summer, they kept adding mile after mile. 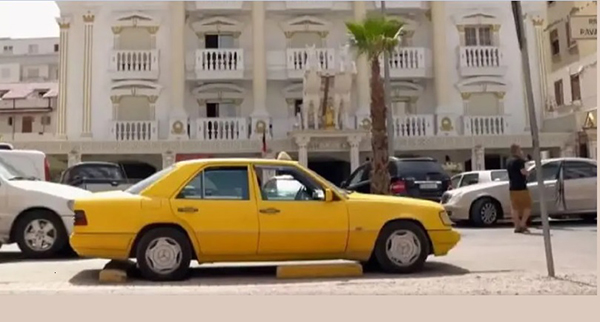 “For me, it is the most beautiful city in the world. Because I was born and raised here,” the owner says in a DW documentary.

In the “most beautiful city in the world,” a taxi ride is about 300 LEK (3 euros). The number or tourists doubles or triples in summer. Revenues do to. But he still uses an old-style mobile phone with buttons. It probably matches the vintage Benz.

The odometer of the car should have now shown 1,584,589 kilometers. That is almost one million miles. 984,617, to be precise. 621,371 of them have been rolled in yellow, the color of taxis over there (and in many parts of the world). But the dial displays only 584,589. No, nobody is trying to trick us. It’s just that it rolled back to zero once it hit one million kilometers. But there are documents proving the real mileage of the Mercedes-Benz taxi.

“I haven’t changed anything,” Mr. Nina proudly tells. “I only had to repair it once, the head gasket.” But that is because he has been taking good care of it throughout the years. It is the car, the comrade, that puts food on his table.