Extracting precisely 510 ps / 503 horsepower from the renowned 4.0-liter turbocharged V8, the Mercedes-AMG C63 S is clearly no slouch, even though in certain conditions, a specific foe might have the upper hand. But when it comes to Autobahn rides, the beast has a trump card—it’s been thoroughly modified to discard the usual 155 mph (250 kph) top speed limiter.

That’s probably just one of the many reasons this particular Mercedes-AMG C63 S went through a few aftermarket processes. Although the traditionally silent POV showcased by the AutoTopNL YouTube channel doesn’t give us much information, the description of the video (embedded below) is a clear give-away.

As such, the 620-PS/612-hp label hints that we’re dealing with a tuned example, which is further attested by the interesting Safety Car livery plastered all over the exterior of this C63 S. Moving very quickly inside after the customary short walkaround, there’s an additional detail to confirm our modified suppositions in the form of a very nice set of bespoke shift paddles tucked behind the steering wheel. 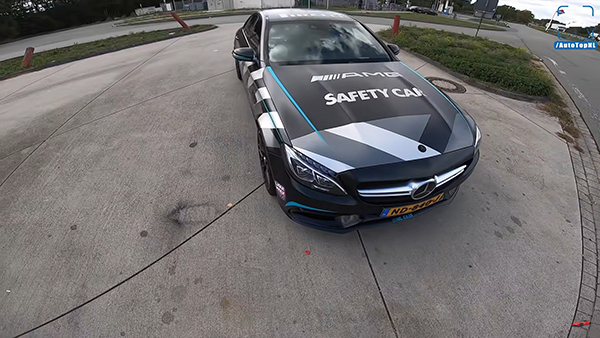 As always, the driver doesn’t waste any time springing into action, so the launch attempt comes fast, at the one-minute mark. And, although initially, it’s a bit hindered by a passing truck, the C63 S showcases its tuned values by reaching around 289 kph (180 mph) on the onboard GPS tracker.

Naturally, at this point, we assumed the Mercedes-AMG doesn’t have any electronic limits imposing the traditional 155-mph (250-kph) threshold, and there was nothing standing in the way of hitting an impressive top speed, except for the traffic. 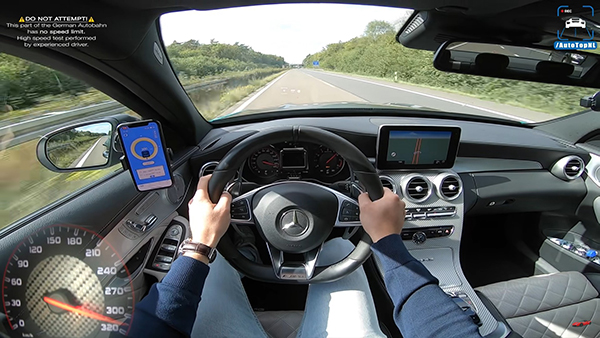 According to the user comments, the blue Mercedes that stood in the AMG’s way from the 2:35 to the 3:40 mark was probably another Affalterbach representative, perhaps even the C43 sibling.

Anyways, once the C63 S gets in the clear, there’s nothing stopping it from roaring its way to a maximum speed of 310 kph (193 mph)—300 kph/186 mph on the GPS—which isn’t modest at all… even though everyone also agreed the wind noise was a bit excessive for this sporty limousine.