Mercedes-AMG has just taken the covers off its latest GT 63 S, now with the ‘E Performance’ suffix. The four-door coupe is AMG’s most powerful vehicle ever and produces even more grunt than some tuners have been able to muster.

This is the car that we thought would be called the GT 73e, but regardless of what the badge on the back says, the most important thing to note is that this is a mix of championship-winning Formula One know-how and road manners, a combination that will make buyers of the BMW M5 CS think twice before accepting a race. There’s much more to this technological masterpiece than just its headline numbers though, so let’s see what Affalterbach has gifted this four-door coupe with. 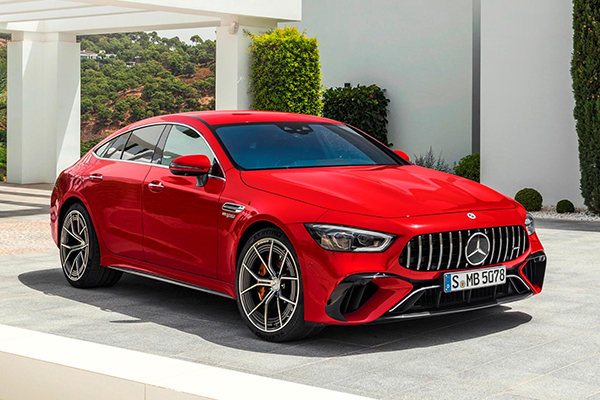 Exterior Design
As we mentioned above, this is a new trim level of the existing Mercedes-AMG GT four-door. To help set it apart from lesser models, the E Performance gets a new front fascia design with wider and more angled side intakes. This design is said to be based on that of the two-door AMG GT coupe.

On the profile, we see new red-accented E Performance fender badges below the faux vents, as well as new 20- and 21–inch light-alloy wheels, each of which can be had in a choice of two colors. That red-accented highlighting makes its way to the back too, where a charging flap has also been integrated into the bumper. Externally fluted trapezoidal quad exhaust tips finish off the updates to styling. New colors are also on offer, although Mercedes has yet to tell us what these will be.

These include the AMG Night Package II or a combo of the Night Package and the Carbon Package. Mercedes will also offer an Exclusive Edition at some stage, but details on this model are yet to be announced. We expect that the US market will get access to all of these. 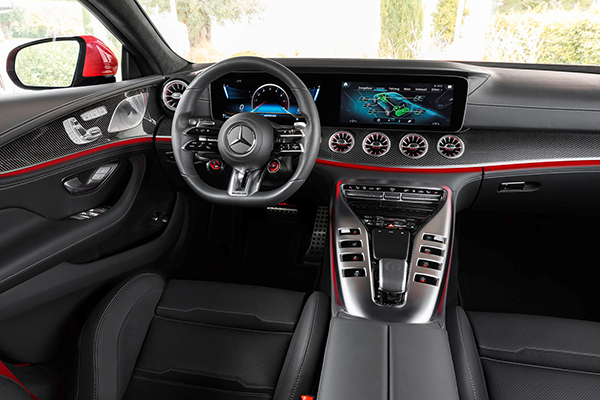 Interior Design And Colors
Inside, Mercedes has fitted its Widescreen Cockpit as standard with the MBUX infotainment system. This now boasts hybrid-specific displays showing range, power consumption, output and torque of the electric motor, and the temperatures of said motor and its battery. A rear-seat multimedia display will be optional too but the AMG Performance steering wheel is standard. This adds a new feature that allows you to select the hybrid drive systems regeneration levels, but more on that later.

Exclusive Nappa leather in Titanium Grey Pearl/Black will be available with yellow contrast stitching, or you can choose from the Style range of Nappa leather options, the first of which comes with diamond stitching and a Truffle Brown/Black theme. Additionally available are five monotone colors: Sienna Brown, Classic Red, Yacht Blue, Deep White, and Neva Grey. 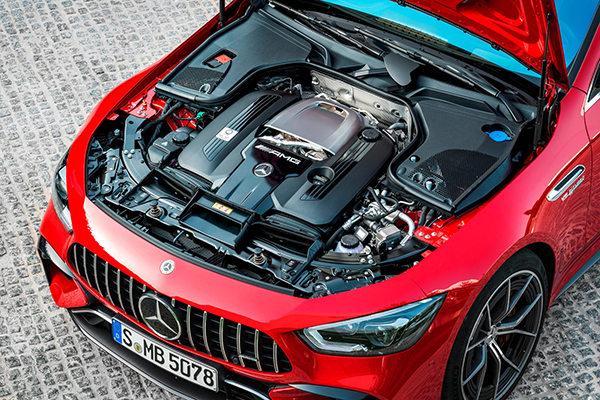 Raw Power
Mercedes-AMG’s familiar 4.0-liter twin-turbo V8 is once again doing duty. Here, it produces 639 horsepower and 663 lb-ft of torque. That alone is enough to outperform the M5 CS on paper, but Mercedes has added an Electric Drive Unit on the rear axle with a supplementary output of up to 204 hp and 236 lb-ft.

In total, the all-wheel drive system with its nine-speed automatic has a whopping 843 horses to contend with. Torque is rated at a total of between 744 and 1,084 lb-ft, giving you the ability to do 0-62 mph in 2.9 seconds, 0-124 mph in under 10 seconds, and a top speed of 196 mph. The electric motor on the rear axle has its own electronically shifted two-speed gearbox with an electronic limited-slip differential. This setup is known as a ‘P3 hybrid’ layout and can send its electric power to the front axle too. 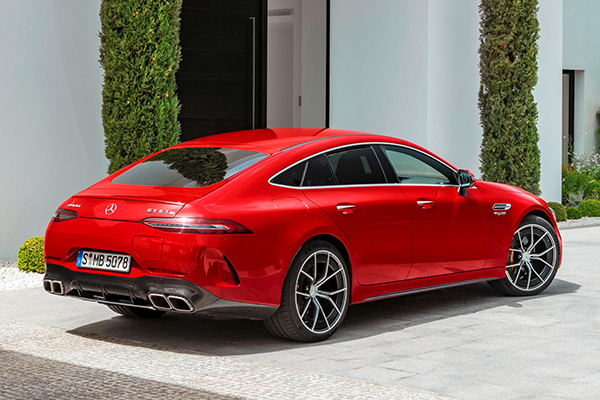 Drive Modes
All of that power is nothing without control, so get ready to geek out on loads of details. We start with the AMG Dynamic Select system that controls drive modes. Here, you can choose from Electric (offering a maximum range of seven miles or and accessible at speeds of up to 80 mph), Comfort, Sport, Sport+, RACE, Slippery, and Individual. Slippery gives you reduced power and a flat torque curve for maximum safety and deactivates the brake regeneration system to prevent any unexpected reactions on the road.

As you can tell from that ridiculously small all-electric driving range, this is a car built to go fast. The system was “designed for fast power delivery and draw, not for the longest possible range,” says AMG. You can also customize the way the car behaves in Individual driving mode, with sub-settings of Basic, Advances, Pro, and Master. Mercedes promises that “even experienced drivers receive optimum assistance without feeling patronized by the system.” 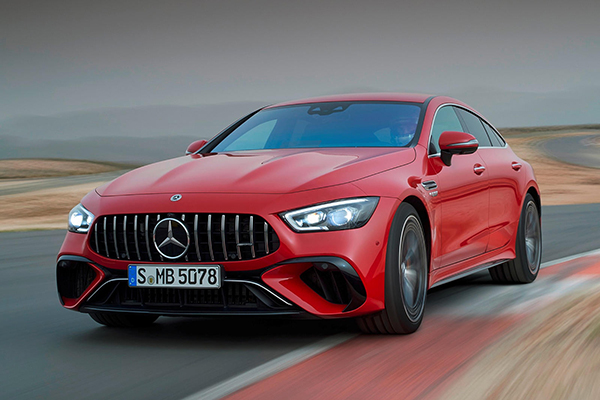 Innovative Hybrid Solutions
The clever hybrid system is fed by a 6.1-kWh battery that weighs an astonishingly low 196 pounds. It offers 70 kilowatts of continuous output and a maximum of 150 kW for up to ten seconds. What makes the system so clever is that it features an innovative direct cooling system that cools all 560 cells individually with a non-conductive liquid. In more traditional systems, the entire battery pack is cooled only with air or indirectly with water. These thus reach their limits very quickly, which is why you used to hear stories of early EVs being insanely rapid on their first runs and rather disappointing until they had been left to cool for some time.

This direct cooling system makes for even heat distribution and repeatable high-performance charging and discharging, meaning that you can go all-out on track, using all the EV power as often as possible. It also means that while you’re giving it the beans on track, the system is constantly using regenerative braking to recharge over and over, with no loss in battery performance. In the long term, that also means that your battery is less likely to need replacing. 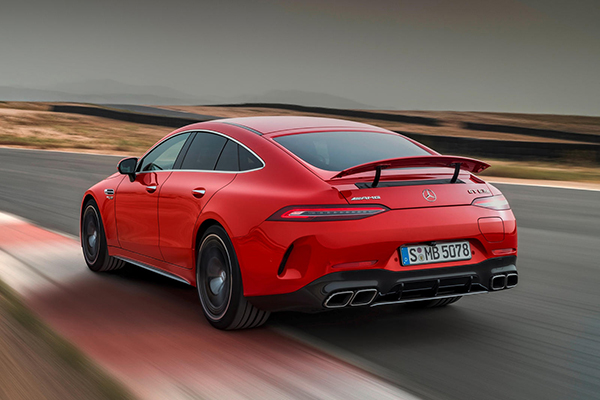 Pricing And Availability
Sadly, Mercedes-AMG has not yet announced what the GT 63 S E Performance will cost in the US or any of its other intended markets, but you can bet that it will be a fair bit dearer than the regular GT 63 S that starts at just under $162,000. With an F1-inspired powertrain, loads of luxury, and a ton of tech, we wouldn’t be surprised if this costs over $180k.

As for availability, it’s scheduled to arrive for the 2023 model year, so expect orders to be fulfilled sometime in the second half of 2022. We can’t wait to see what the competition comes up with.