Mercedes A-Class will break cover in revised form later this year ahead of going on sale in 2023, and we’ve caught multiple versions of the new car testing, including the hot AMG A 35 and A 45 S models, a saloon and the most popular hatchback bodystyle. 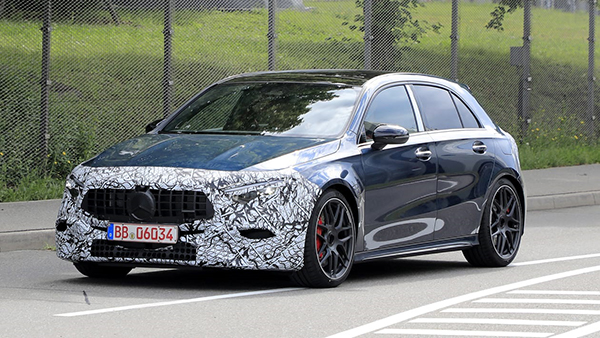 A range of cosmetic tweaks can already be seen on these prototype cars, and inside we’ll see fresh technology as part of an updated cabin. The new A-Class will once again battle with the Audi A3 and BMW 1 Series in the premium hatchback market.

As we can see from these spy images, the camouflaged areas of the new front bumper suggest a complete redesign. The headlights will also be tweaked, but the shape of the grille will remain the same, with a single-bar design for the non-AMG models and vertical bars for high-performance A-Class variants.

At the rear, there’ll be a reshaped diffuser, new exhausts and some redesigned tail-lights to match the fresh lighting at the front end. An updated colour palette and a choice of new alloy wheel designs will round off the changes. The A 35 retains dual-exit exhausts, where the A 45 S gets a quad-exhaust tip set up. 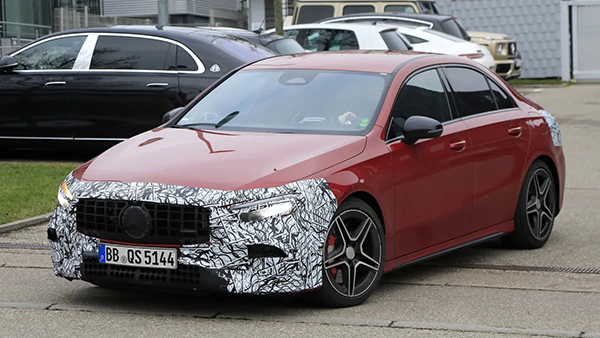 Inside, it’ll be evolution rather than revolution for the new A-Class. This prototype spotted last year appeared to share the same 10.25-inch dual-screen infotainment system as the current A-Class, although we expect Mercedes will update the tech to run its latest software, helping to keep the screens looking fresh.

The steering wheel also appears to be the same three-spoke unit found in the old car, rather than the two-spoke unit found in Mercedes’s latest models. However, there should be a few new trim pieces for the cabin and some new upholstery finishes to choose from.

Styling revisions for the AMG A 45 look to be even more minor, with the only obvious change being new front and rear light clusters. The A 35 will do a better job of differentiating itself from the pre-update model, thanks to the adoption of the A 45’s slatted ‘Panamericana’ front grille. As before, the A 45 gets a quad-exit exhaust, while the A 35 makes do with a twin-exit system. 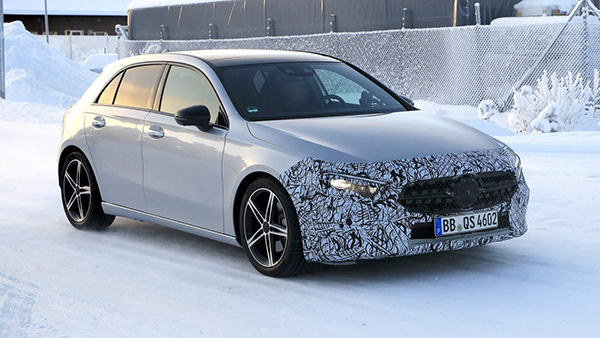 The current AMG A 45 S is the most powerful hot hatchback on sale, with its turbocharged 2.0-litre four-cylinder petrol engine chucking out a massive 415bhp, and the facelifted variant could pull further ahead of the competition with another bump in power.

Mercedes hasn’t yet confirmed any technical details for the new car’s powertrain, but it’s all but certain to retain the same eight-speed dual-clutch automatic gearbox and 4MATIC four-wheel drive system found in the outgoing model.

The standard A-Class will continue with the current car’s range of petrol and diesel engines, albeit with a few efficiency tweaks. The range will kick off with a 1.3-litre four-cylinder petrol unit, available with either 134bhp or 161bhp. 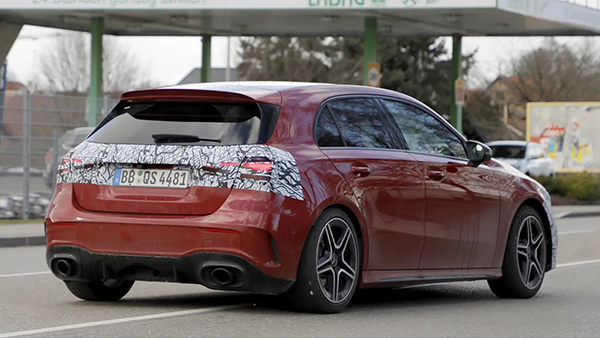 Above that, there’s a 2.0-litre four-cylinder petrol engine with 221bhp and a plug-in hybrid variant that mixes the 1.3-litre petrol with a 100bhp electric motor and a 10.6kWh battery pack for a maximum output of 215bhp and claimed fuel economy figure of up to 282.5mpg.

Despite the stigma surrounding the fuel, Mercedes should also continue to offer the updated A-Class with diesel power. There’ll be a choice of two options, both based around the same turbocharged 2.0-litre four-cylinder unit, offering buyers either 114bhp or 148bhp.

Prices will be revealed when the car makes its full debut, but we expect a small increase on the current car’s £30,750 starting price.