A few years ago, Mercedes-AMG decided to split its performance compacts into two groups. The A45 S and its brothers were free to be as powerful as possible, pushing past 400 horsepower, while the new A35 family went after “budget” rivals like the Golf R with a 302 horsepower (306 PS) engine.

You’d be forgiven for thinking these two cars are pretty much the same as they don’t look that much different. Yes, the AMG A45 S has the Panamericana grille and double the number of exhaust tips, but the A35 still has a properly aggressive hot hatch design when fitted with the optional AMG Aerodynamics Package.

However, £12,000 ($16,000) separates these two in the UK where the comparison took place. The AMG A35 offers 306 horsepower and 295 pound-feet (400 Newton-meters) of torque from a turbocharged 2.0-liter gasoline engine. These are certainly healthy numbers for only a four-pot, but they pale in comparison to the hand-built engine underneath the A45 S’ hood. At 421 hp and 369 lb-ft (500 Nm), it’s the most powerful mass-produced four-cylinder engine.

Carwow lined up the two similar hot hatches from Affalterbach to find out whether the A45 S is worth the steep premium. For the extra money you’re paying, the beefier variant swaps out the seven-speed, dual-clutch automatic in favor of an eight-speed DCT and also gains a rear differential and even a drift mode. All these extra goodies come at a cost in terms of weight as the A45 S has to carry around an extra 80 kilograms (176 pounds). 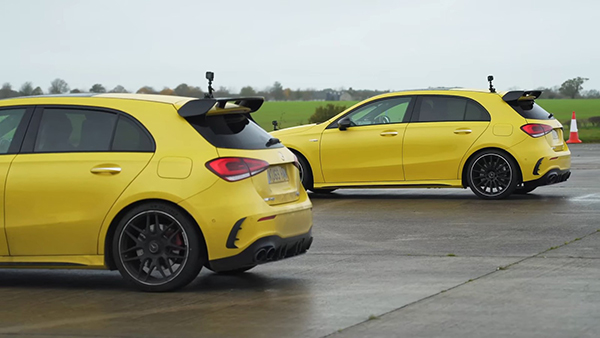 No one was expecting the A35 to keep up with its bigger brother, so the end result is not exactly a surprise. The A45 S completed the quarter-mile run in 12.1 seconds whereas its lesser sibling needed an extra 1.3 seconds to complete the task. Carwow then moved on to a couple of rolling races from 50 mph (80 km/h), and surprise, surprise, the duels had a similar outcome.

The comparison between the two German hot hatches ended with a brake test from 70 mph (113 km/h) where the lighter A35 had a slight advantage over its more potent counterpart. The A45 S was the overall winner in the end, but it all comes down to whether the edge it had over the A35 is enough to justify the much higher asking price.