Mercedes is determined to expand its range of high-end luxury models and naturally, one of the main priorities is Maybach. Besides the S-Class, the GLS, and the upcoming EQS, another model that will proudly wear the Maybach emblems is the new SL roadster. Guided by the official teasers, we created a series of speculative renderings that closely depict what the Mercedes-Maybach SL will look like. 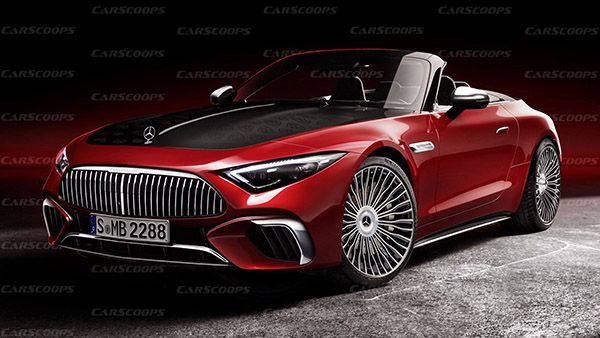 The new generation of the SL was introduced last year, featuring Mercedes-AMG branding as a performance-focused offering. The 2+2 roadster shares its rigid aluminum frame with the next-generation AMG GT, replacing both the previous SL and the discontinued AMG GT Roadster. Design-wise, the model is a big step up from its predecessor, looking a lot more aggressive and incorporating more exotic features.

As hinted at by Gorden Wagener, chief designer at Mercedes-Benz, the transition from AMG to Maybach in the SL will not be what we call discreet. While most part of the bodywork will be carried over, new trim elements will make it easy to distinguish the Maybach SL from lesser variants.

Starting with the front, the grille will retain the Panamericana outer shape and the triangular LED headlights. However, the inside of the grille will be totally different, featuring a heavy dose of chrome and the Maybach lettering as seen on the S-Class and the GLS.

Extra chrome elements will be added to the bumper intakes, front fenders, mirror caps, side sills, and diffuser, replacing the dark-themed carbon fiber trim of the AMG derivative. After all, Maybach customers want to be seen and there is nothing shinier and more reflective than bright chromework. Unlike Rolls-Royce with its Black Badge and Bentley’s Mulliner Blackline, Maybach has yet to follow the blacked-out design trend that is slowly conquering the color and trim departments. 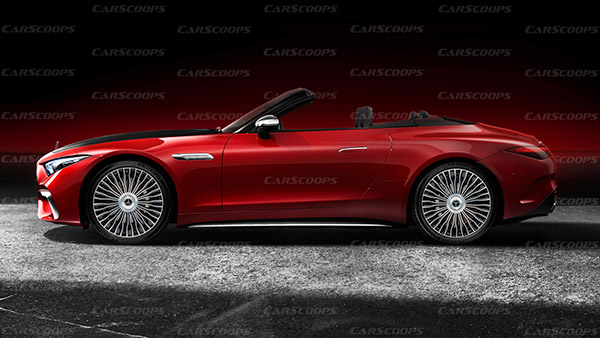 Still, a highlight of the Maybach SL will be the black-painted bonnet with a chrome strip in the middle. It will feature a pretty unusual pattern with the Maybach logo scattered all over the place, reminiscent of some designers’ bags and clothing lines. The absence of a Mercedes badge on the grille will be substituted by the classic Mercedes ornament on the hood, a feature you will be able to see from the driver’s seat.

Last but not least, the Maybach will come with a new set of alloy wheels, making the profile look more luxurious. We opted for the 21-inch wheels with a double 17-spoke design from the S-Class, which looks more fitting to the roadster than other Maybach options.

Moving inside the cabin, Mercedes will most likely offer plenty of customization options to prospective buyers of the SL, following the example of its existing range. The finest quality Nappa leather combined with Alcantara, aluminum, and other precious materials will transform the cabin from sporty to luxurious. We could also see fancier options inspired by the fashion industry, similar to the Haute Voiture Concept. Lighter tones would go well with the character of the Maybach SL, since the interior will be often exposed when driving with the roof down.

In terms of technology, there is already plenty of kit available in the SL, including a digital cockpit with a 12.3-inch LCD instrument cluster, an 11.9-inch infotainment touchscreen with the latest MBUX, and a 3D head-up display. It will also tick all the boxes on the available ADAS, and likely feature a high-end audio system that is even better than the already great Burmester one on the AMG. 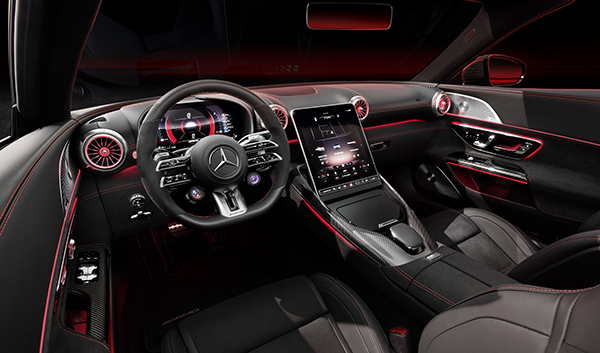 Solving The Mystery Of The Powertrain
Mercedes hasn’t given us any clue on what lies under the highly decorated bonnet of the Maybach SL but we can make speculations based on the current range and Maybach’s own heritage.

The SL debuted with a twin-turbo 4.0-liter V8, initially offered in two power guises for the SL 53 and the SL 63. A few months later, Mercedes expanded the range with the entry-level SL 43 which came fitted with a mild-hybrid turbocharged 2.0-liter four-cylinder engine. Furthermore, in the near future, we expect two new plug-in hybrid variants – the SL 63e and the SL 63 E-Performance. The latter will be positioned at the top of the range in terms of power output, generating an impressive 831 hp (842 PS / 620 kW) from the electric motors and the V8 engine combined.

Maybach is currently offering the S-Class and the GLS with either the entry-level 4.0-liter V8, or the proper 6.0-liter V12, both coming with twin turbochargers. The first option is an easy bet for the Maybach SL since it has already proven to be compatible with the roadster. However, a V12 option would be highly appreciated since it would mark the return of a twelve-cylinder SL, distance it from the AMG variants, and bring it closer to rivals in the ultra-luxury segment including the Bentley Continental GT Convertible that’s currently available with a V8 and a W12.

We are not sure if the large powertrain can fit in the rather small footprint of the roadster, but we definitely hope it does. However, if we want to talk logic, then the most sensible choice for Maybach would be the plug-in hybrid powertrain combining effortless performance with a quiet and zero-emission EV driving mode. This would also make it the most powerful of the range, since no ICE V12 can match the combined output of Mercedes’ latest electrified setup.

Mercedes hasn’t given us a debut date for the new model but we wouldn’t be surprised if it came out as early as 2023 since the basis is already there. Interestingly, the Mercedes-Maybach SL won’t be the most expensive SL money can buy. This role will be taken by the upcoming SL Speedster, a limited production two-seater that will introduce us to the ultra-exclusive Mythos range.