Decades after it came out, the Mercedes-Benz 560 SL is still considered one of the most iconic vehicles of its period. The car was created as an expansion for the brand’s SL-Class – it elegantly blended luxury with powerful capabilities, especially since it boasted the most powerful V8 option available for the SL-Class at that time. Today, I’d like to present a one-of-a-kind build of a 1989 Mercedes-Benz 560 SL, expertly crafted by Bespoke Restoration. Before I go into more detail, let me tell you about the model. 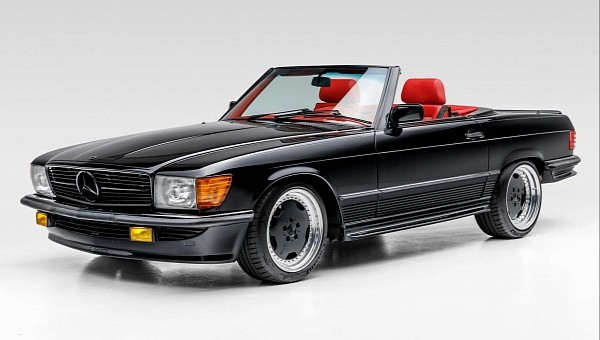 It was introduced in 1986 – besides the power increase, the 560 SL featured other upgrades, including minor external changes, improved suspension, and new brakes. The most powerful engine was a 5.6-liter V8 that developed 272 hp (about 203 kW or 276 ps). However, it was only available in Europe in S-Class sedans.

The rest of the markets, the United States, Australia, and Japan, got a convertible version with a catalytic converter. Due to the emissions regulations in these countries, the engine outputted only 230 hp (around 172 kW or 233 ps). The American cars were fitted with DOT-compliant bumpers and quad headlamps; many came with a three-speed automatic transmission. A 560 SL had a price tag of $48,000 – that’s about $115,000 in today’s money.

Let’s move on to the uniquely restored 1989 560 SL. Its maker, Bespoke Upholstery and Restoration, operates out of Costa Mesa, California, and specializes in restoring and servicing classic Mercedes-Benz authentically and tastefully. The company gifted this 650 SL with numerous performance upgrades and an authentic yet eye-catching look. 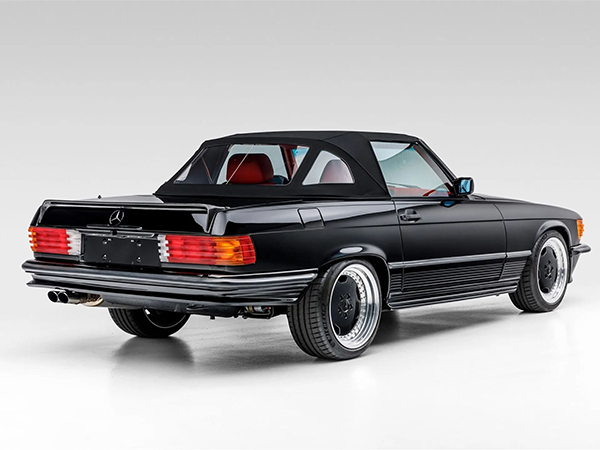 This example was manufactured in July 1988 and finished in Smoke Silver Metallic, paired with a Beige leather interior and a Dark Brown fabric folding top. It was equipped with a Becker Grand Prix AM/FM stereo with cassette player and power antenna, an anti-theft warning system, a folding center armrest, heat-insulating glass, automatic climate control, and power mirrors with heating function. The vehicle was delivered new to Bridgehampton, New York, and the current owner bought it in 2015.

Reportedly, the odometer displayed fewer than 34,000 miles (54,718 km) at the time of the purchase. The R107-chassis SL proved to be a perfect candidate for a complete restoration.

Work by Bespoke Restoration started the following year – given how extensive it was, the refurbishment took more than two years to complete. The 560 SL was fully disassembled, and its chassis was stripped to bare metal. It’s claimed that every single part of the car was either replaced, restored, or refreshed as needed – that’s precisely what every car enthusiast wants to hear before buying a restored vehicle.

Regarding performance, a new engine and suspension components were fitted, along with a new six-speed manual transmission. Moreover, a 3.27:1 rear differential and full stainless-steel exhaust with custom “tri-Y” headers were installed, and the suspension was upgraded with Koni Classic struts and H&R springs. Stopping power is critical for any vehicle – a six-piston, large-diameter front brake hit helps bring you to a safe stop. All these high-end upgrades combined offer a refined and exciting driving experience.

The exterior underwent many modifications to reach this striking look. The bodywork was sprayed in black; an AMG kit featuring side skirts, a front air dam, and a rear valance were added. The U.S. spec elements were replaced with the European version bumpers and single-unit headlights. The look is completed by a carbon fiber rear spoiler made to AMG specification, a shadow-line trim, and eye-catching color-matched AMG Aero wheels by OX Racing.

The fully customized interior perfectly complements the overall look. It was entirely refurbished in red leather and boasts both retro and modern elements, such as an AMG steering wheel and Recaro seats. The wood trim was replaced with carbon fiber in the center console, door-panel inserts, door sills, and door handles. A shift knob with a red leather boot was also added, and the stereo system was upgraded with a McIntosh CD player head unit and an amplifier paired with ten speakers.

The 560 SL models are already pretty sought-after; finding a low-mileage and well-maintained vehicle is difficult, especially one from 1989. But what I presented today isn’t your ordinary 560 SL. It has been tastefully modified and restored to an exceptionally high standard. Thus, the chances of finding such a vehicle for sale are pretty slim. Well, you’re in luck – this car will soon be auctioned.

This 1989 Mercedes-Benz 560 SL by Bespoke Restoration will be offered on Thursday, January 26, 2023, in Phoenix, Arizona. The listing’s price reflects the amount of work poured into the project – the auction house recommends $200,000 – $250,000 (€185,000 – €235,000). This machine will probably be an excellent addition to a collection. Honestly, let’s hope the future owner will at least take it around for a spin and fully experience its potential.