The 2023 Mercedes-AMG SL 63 is both a phenomenal and hard-to-love roadster all in one. There are few things it does wrong or poorly. Its acceleration is relentless. Its suspension wizardry works like a charm. The interior is definitively luxurious. You could also make the argument that it’s one of the best-looking cars on sale today. It has all of this going for it, but man, it’s just not as much fun as it should be. 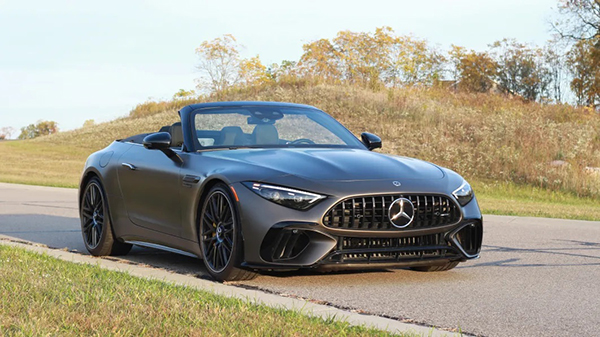 For previous generations of SL, being a sports car was not their stated missions. Sure, there were AMG and Black Series variants, but the SL has been a grand tourer at heart for decades. Today, it’s a little different with the SL slotting in as the AMG GT Roadster’s spiritual successor (the actual next-generation GT will be a more hardcore, track-focused coupe). Not only does it have fairly huge shoes to fill, but it’s even built on the same platform that the soon-to-come AMG GT Coupe is to be built on, giving us a glimpse as to what might be in store.

In fairness to Mercedes and AMG, trying to turn the SL into both a grand tourer and a sports car in one is a tall, if not impossible, task to undertake. By virtue of its layout and drivetrain setup, there’s no way that it would be able to match the AMG GT Roadster in sports car drama.

The AMG GT is a rear-wheel-drive, front-mid-engine vehicle, meaning the engine is behind the front axle. The new SL is not, preferring a more traditional and common layout with the 4.0-liter twin-turbo V8 sitting over the front wheels. It also has a tiny rear seat, pushing the two front passengers closer to the middle of the car. Part of the charm in driving the AMG GT is the fact that you’re practically sitting on the rear axle with an enormous hood out in front of you. Being right over top of those two rear wheels begging for grip with that long but shockingly light and maneuverable front end (thanks to the front-mid-engine placement) is an undeniably special experience, and it’s not present in the SL.

The SL 63 is also all-wheel-drive-only. That’s a boon for traction and acceleration times, but don’t expect to enjoy the same squirrely and constantly active rear end of the AMG GT. Instead, the SL adopts a point-and-shoot attitude befitting that of a rocketship grand tourer with 577 horsepower and 590 pound-feet of torque. It’s properly quick. You’ll never struggle to get the power down. And each successive acceleration run will be the same as the last with no drama outside of the initial gut punch on launches. There’s no denying the effectiveness of AMG’s 4Matic+ all-wheel-drive system – 0-60 mph comes in 3.5 seconds – but the lack of rear-wheel drive definitely subtracts from the giddiness of the whole deal.

As for the noise from this V8, it’s hanging out in that gray area between an in-your-face sports car and a subtle GT car. The burble of that V8 sticks around all the time, but never elevates past the point of being courteous. In many ways, it’s similar to a Porsche 911’s civilized nature. When unleashed, it sounds like an honest V8, but you can drive along in general anonymity most of the time. All of the outlandish noises start emanating from its quad tips when you have the engine and exhaust in their aggressive modes. Tapping up the gears of Mercedes’ multi-clutch nine-speed transmission brings reverberating claps, while shifting back down unleashes an array of noticeable, but not police-summoning pops. The noise is novel, but it’s all a bit too orchestrated and restrained for what we’re used to with rowdy AMG cars. Compared to the AMG GT, it’s even more disappointing, as the vibrations and noises from the engine and exhaust in that car were seemingly transmitted straight into your bones. If a little distance from the powertrain and added refinement is what you want, though, the SL has it. 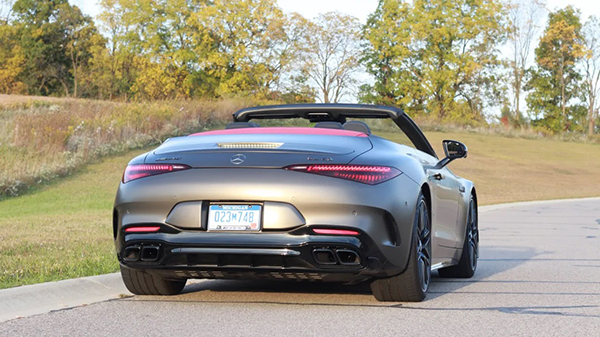 Technically speaking, the SL 63’s suspension is incredible. It’s called AMG Active Ride Control, and the headline feature is hydraulic, active anti-roll stabilization. This SL 63 — unlike the SL 55 — doesn’t have traditional mechanical anti-roll bars. Active hydraulic elements replace them, and the result is a system that allows for torsion bar stiffness from zero to very, very stiff. All four adaptive dampers are interlinked with this system to allow harmonious functionality between all the moving parts. Ultimately, the goal and result of the massively complex suspension is to provide a ride that can go from mega-luxury to racetrack stiff in fractions of a second.

Not to rain on AMG’s parade, but the experience from behind the wheel is akin to driving a car with GM’s MagneRide (magnetic dampers). The SL is able to chew through terrible pavement either at speed or when slowly cruising around town as though it’s a dedicated luxury cruiser. That forgiveness in the chassis entirely disappears when you pop it into Sport+ or Race mode, and an impossibly flat, shockingly stiff sports car comes out. It’s genuinely cool technology that you can feel working just how it should. What you can take from this is that the SL 63 is a masterclass at delivering both stupendous ride quality and huge handling confidence. Either personality can be unleashed at the drop of a hat, and it takes near-zero effort from the driver to realize that performance.

There is a catch, however. During Autoblog’s first drive of both the SL 63 and the SL 55, senior editor James Riswick found that the less-powerful SL with its less sophisticated, but hardly rudimentary AMG Ride Control adaptive dampers delivered a comparable experience. Importantly, it came across as more refined. When driven back-to-back, the 63 passed more “noise” through the steering wheel in the form of excess vibration and some impact harshness over bumps. As he wrote then, “If we had only driven the 63, perhaps we wouldn’t have a gripe, but we unquestionably preferred driving the SL 55.” He wasn’t alone as other journalists reported preferring the “lesser” 55.

Of course, I have only driven the 63, so his analysis proved prophetic to a degree. Yet, it’s also telling that the apparently less refined SL with a harder edge still isn’t as rowdy as the AMG GT before it. That car was uncomfortable and uncouth in comparison. It has an edge that keeps you on your toes and makes you want to keep trying your best to tame the beast. Plus, there’s no getting around the inherent weight balance advantage of shoving that engine into the firewall behind the front axle that the SL is distinctly missing. Those are reasons to love the old AMG GT, but they also make it untenable to own for folks who expect a traditional Mercedes-Benz experience. The SL brings those folks back into the fold.

If you love what Mercedes has done for the interiors of its latest flagships like the S-Class and any of the electric EQ models, you’re going to love the new SL, too. There isn’t a more sumptuous time to be had in the world of sporty convertibles. A Porsche 911 Cabriolet or Lexus LC 500 Convertible obviously have luxurious cabins, but in typical Mercedes fashion, the SL is the pinnacle of technology and comfort. 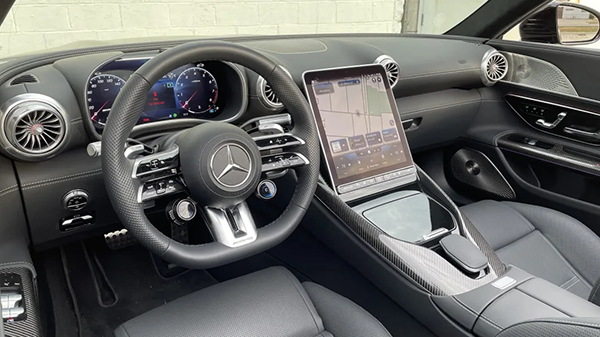 Two big screens house most of the SL’s functionality, and Mercedes took care to engineer them for a convertible application. Although the central 12.3-inch touchscreen is shared with the S-Class and other Mercedes, it can uniquely be adjusted between a 12-degree and 32-degree incline in an effort to prevent glare — simply set it to the best viewing angle as the sun requires. Most Mercedes-Benz products these days feature a free-standing cluster screen, but the SL adopts a big hood over top of it to keep glare away.

The only miss with this screen setup is that it’s involved with the top operation. A hard button on the console brings up a screen that allows you to swipe back and forth, then hold your finger there on the screen to put the top up or down — it takes 15 seconds. On a couple occasions, it was simply unresponsive to our commands, which is as concerning as it sounds. However, you can also operate the top by holding the hard button that brings up the menu. It’s a little clunky, as the same button is then used to put the top both up and down. At least a backup for the screen exists but that just speaks to how needlessly complicated it is.

The elimination of wind noise and ability to stay warm in the cabin when driving in lower temperatures makes the SL a lovely fall or early spring car in northern states. Mercedes is known for its “Airscarf” heating system that keeps the top half of you toasty, and for good reason. Combined with super-quick-to-heat seats and a heated steering wheel, top-down motoring is downright relaxing on chilly cars-and-coffee mornings. If you’d rather cruise around with the top up, Mercedes’ three-layer soft top is insulated well. A hardtop would perhaps be quieter, but the weight savings and lower center of gravity from using a soft top is appreciated.

What ultimately makes the SL hard to love is both an impossible-to-shake comparison to the AMG GT and its rather clinical take on high performance. There’s no doubt the SL 63 is a highly capable convertible sports car, but the drama and sense of occasion that normally comes as standard equipment with AMG cars simply isn’t there. It’s nearly perfect if the goal is to simply have a standout luxury convertible that goes like stink. When it comes to driver involvement and smiles per gallon, though, that’s where the SL comes up short.

A Porsche 911 Cabriolet or Targa in pretty much any version — which also has a rear seat — is going to hit on all of the marks this SL misses on, and the penalty for luxury features can be largely negated with Porsche’s extensive options list. Plus, the SL 63’s extravagant price — $205,135 as tested means that if it’s in the budget, so is a 911 Turbo. All that said, the SL’s styling might just do enough to make up for anything else. Few cars in the world, at any price, will make people stop and stare like the new SL will, and that right there could be all the difference.