Mercedes-Benz has always been one of the world’s top automakers, and some of its classic models easily stand testimony. But when inspiration strikes, even the company itself would probably turn out impressed by unique builds like this one right here.

The Hoonigan AutoFocus channel on YouTube is no stranger to the custom projects of the Los Angeles-based S-Klub. And, according to Larry Chen, the host for this video, they have a habit of turning out with something better every time.

That’s an appraisal we definitely agree with, considering the project at hand, a “1955 Mercedes-Benz Gullwing Speedster AMG”. If the name is any hint, this is no ordinary 300 SL. As per the words of John Sarkysian (a.k.a. Slang500), one of the designers, this is a four-into-one car build.

The project initially started life as a bare shell 300 SL Roadster, which was then attached to the chassis of a supercharged 2002 SLK – hence the AMG-swapped nature of the V6 engine. The latter actually has a very odd voice, and we can check it out from the 29:45 mark when the ride along finally starts… backwards.

Anyway, this video is quite long because Chen really wanted to highlight just about everything, including the connection with two other models. It’s the Gullwing series and the Porsche Speedster lineage (hence the name) as well as the windscreen that was directly borrowed from a Speedster after four failed attempts at finding the right piece to fit the overall design. 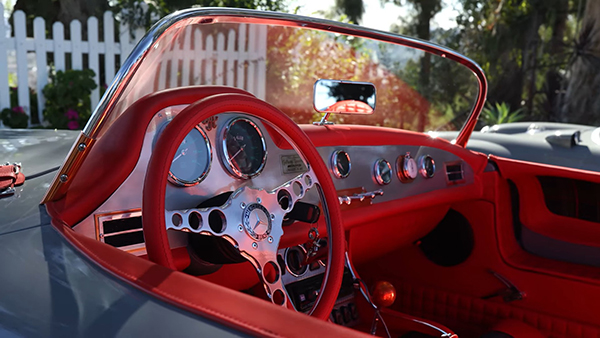 No worries, though, because we broke down the chapters, starting from the 1:49 mark when the initial presentation starts. From the 4:59 mark, we see the detailed discussion about the “stand-out” features; we especially love the attention to details, the golden supercharged V6, as well as the 4.5-inch (114-mm) wider fender flares.