The new Mercedes-AMG SL, the new edition of an icon, returns to its roots with a classic soft top and sporty character. At the same time, the luxurious roadster as a 2+2 seater is particularly suitable for everyday use and puts its power down on the road with all-wheel drive for the first time. High-tech components such as the AMG ACTIVE RIDE CONTROL suspension with active anti-roll stabilization, rear-axle steering, the optionally available AMG ceramic high-performance composite brake system, and the standard-fit DIGITAL LIGHT with projection function sharpen the sporty profile. In combination with the AMG 4.0-litre V8 bi-turbo engine, this results in a driving experience of the highest order. As a consistent Performance Luxury model, Mercedes-AMG in Affalterbach has developed the SL completely independently. Two models with AMG V8 engines will kick off the market launch.

However, that wasn’t going to stop them from launching a new one, and handing over the development to Mercedes-AMG. Officially dubbed the Mercedes-AMG SL, the new generation debuted last fall, with new everything, from the construction, to the design, tech features, safety gear, and powertrains.

Even the top is brand-new, and it is a soft top, as they wanted to reduce the weight, and lower the center of gravity, which, in theory, improves handling. It can open or close in roughly 15 seconds, at up to 37 mph (60 kph), and is operated from the infotainment system, or by a switch on the center console. The car also has a 2+2 seating layout, and a bigger luggage area that can fit two golf bags when the roof is lowered. 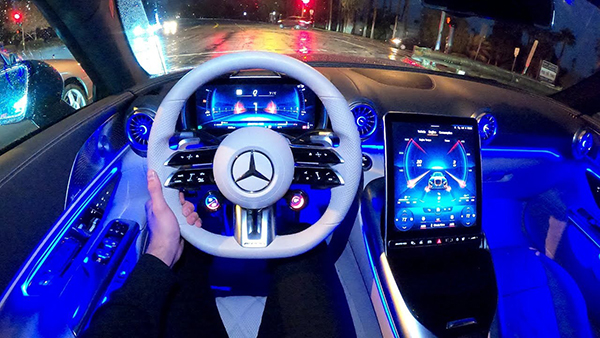 Mercedes-AMG promises additional models, including the AMG E Performance, which should use the same plug-in hybrid powertrain as the GT 63 E Performance, with 831 hp, but for now, it was the SL 55 that became the subject of a new video. No, it’s not a promo, but a POV drive, which was actually shot in Palm Springs, USA, and focuses mostly on the tech items of the car, and on other novelties. The roadster was taken out for a short drive at night, and kept its top up, as it was raining.

Needless to say that it did not turn many heads, as there weren’t many people out, but it did infect the camera lens with its ambient lighting. I have to admit that I am a big fan of LED strips in the cabin, as long as they’re discreet. Nevertheless, there is nothing discreet about this one, hence the nightclub reference in the title, which, to be honest, can be used to describe all modern Mercs when it comes to this feature.

Other than that, the new SL looks like a well-sorted package, with a V8 engine up front, and all-wheel drive. However, since we haven’t driven it yet, and not many people have, it’s hard to label it as good, bad, or anything in between. Also, despite being shot from the driver’s point of view, the video that you are about to watch is hardly a review, but more like an ‘unboxing’ and first-impression in an unknown environment, as the man holding the wheel is German, and more familiar with the Autobahn than a Walmart parking lot, which is where he started off from.

Normally, we would have wrapped it up by telling you how much it costs in the United States, yet since Mercedes-AMG has yet to announce the pricing details, and on-sale date, it’s impossible to do so. Still, it shouldn’t be long until it starts arriving at dealers, considering that there are a few examples already in the country. But what’s your opinion on it? Is it a yay or a nay, and would you get it over an open-top Porsche 911?