Space is a premium in a roadster, but the new AMG SL63 uses its available space exceptionally well. The new two-door is showing off its interior before we can glimpse the exterior – it’s what’s on the inside that counts – and the new cabin should please many. Gone is the asymmetrical nightmare that plagued the last-generation model, Mercedes replacing it with a new dash that’s shaped like a wing. 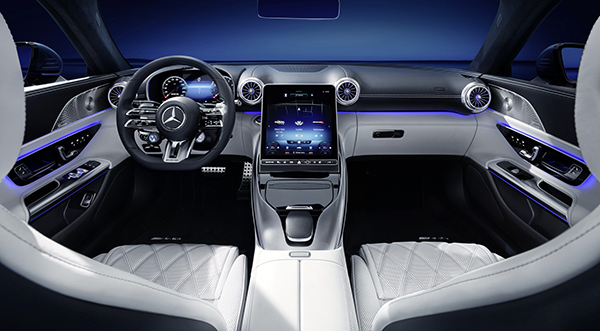 The Mercedes-Benz SL is set to return later this year for an eighth generation starting in model year 2022. We’ve seen a bunch of spy shots already and found that the new SL will be getting a soft top only as Mercedes has promised a return to its “super leicht” super light roots. Lately it’s felt more like a two-ton-plus GT. On July 13, Mercedes showed off the first real pictures of the SL, though only its interior. But we can still learn a lot.

Mercedes says it wanted to focus on the word “hyperanalog” while styling the new car. The original 300 SL Roadster was certainly old-school, and the brand wants a return to that. However, it understands that some things need to be digital. 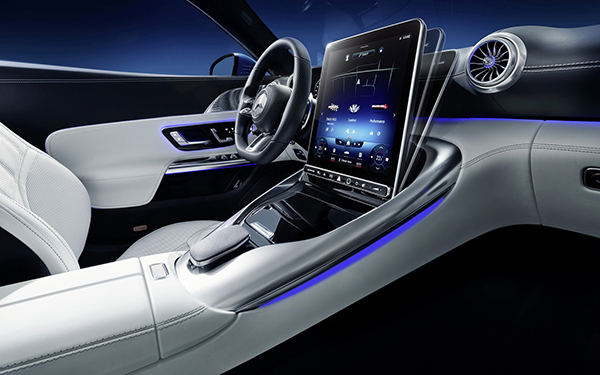 “The new SL combines the highest levels of comfort and quality in its interior, coupled with just the right amount of sportiness. The high-quality combination of the analog world and state-of-the-art digital equipment makes one thing clear: the new SL is the rebirth of an icon for the modern era,” says Philipp Schiemer, chairman at Mercedes-AMG GmbH.

The biggest news besides the soft top is probably the addition of rear seats. Not since 1989 has the SL sported places for four passengers, though we can see those rear seats aren’t very large. There’s definitely space for a child seat or two, and Mercedes notes you can also fit a golf bag back there. As someone who’s driven to a golf outing in a 2+2, you can also stand up two bags and belt them in like your children. 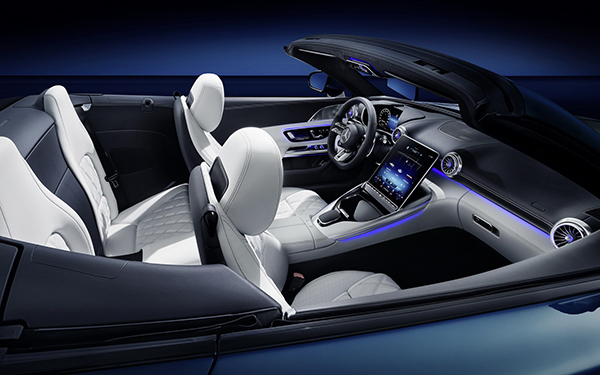 Several upholsteries are available for the sport or AMG Performance Seats. Customers can choose from single or two-tone Nappa Leather, elegant Nappa Style Leather with diamond stitching, or the sporty combination of Nappa Leather with microfiber and contrasting topstitching in yellow or red.

Unlike many of the new crop of Mercedes sedans and coupes, the SL doesn’t have one connected screen from the center to the instrument cluster. Instead it has your normal digital instruments, and in the center a portrait-style 11.9-inch multimedia screen that can slide fore and aft to get rid of reflections. The first thing we noticed is how horizontal that screen is, which is nice and close so you don’t have to stretch, but on a sunny day it would be unreadable in that position. 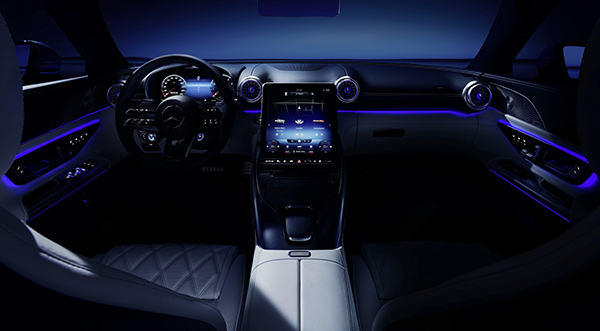 It does use Mercedes’ current MBUX infotainment system with the same categories and AMG modes that we’ve come to expect. Both it and the instrument cluster can be personalized and if you’re looking for more, the interior features 64 different ambient light colors.

The door cards flow into the symmetrical instrument panel with decorative stitching and feature the intricate metal Burmester speaker covers above the company’s traditional seat adjusters. Turbine-style vents provide hot and cold air from the dash. The seats are also new and are meant to look slim and lightweight. We can see the vents in the headrests, a boon for traveling with the top down in cooler weather. 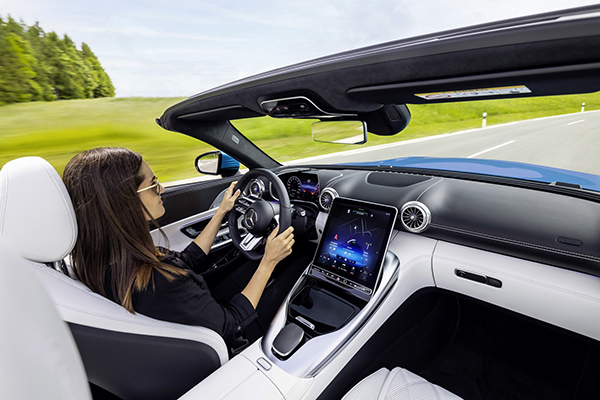 We know the new SL is going to steal the look of the AMG GT. The new, larger convertible is also going to replace the GT Roadster, which is fine. That smaller car is the Mercedes track weapon, this larger SL can continue to be the cruiser. We’re not saying it won’t be powerful. Output has only grown over the past 30 years. If we’re guessing, the top gasoline model will feature the company’s 4.0-liter twin-turbo V8. Lesser models will get the i6/EQ Boost combo and we’re betting a massively powerful hybrid will sit atop the entire range.

We don’t have pricing yet but the current SL starts at $91,000 and goes up to $114,700. However, those ride on an old platform and use old engines. And you can’t even build an AMG SL on the consumer site right now. Expect the AMGs to come first, starting at a minimum of six figures. The most expensive models could be well higher than that. We’ll find out more later this year.