Mercedes-Benz has announced the introduction of Drive Pilot for the range-topping S-Class and EQS models, allowing monied drivers to waft up and down the Autobahn with minimal effort. German customers will be able to select the clever technology from mid-April, for €5,000 (approx. $5,200) for the S-Class and €7,816 (approx. $7,800) for the EQS. 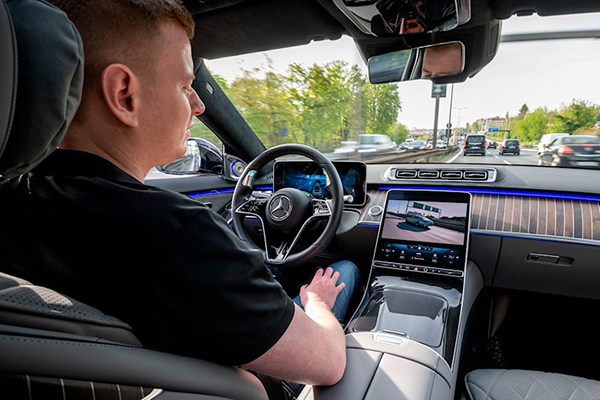 In keeping with its reputation for innovation, this makes the Stuttgart-based brand the first automaker in the world with an international valid certification for conditional automated driving. The Level 3 autonomous driving system is rather clever; customers can palm off driving responsibilities under certain conditions – such as heavy traffic or on certain stretches of German highways up to speeds of 37 mph – and focus on other tasks.

For now, at least, it appears that Mercedes-Benz is leading the field concerning self-driving technology. Stiff competition from other brands remains, however, with Volkswagen throwing its weight behind fully-autonomous driving.

When activated, Drive Pilot takes charge of vehicle controls through the use of radar, LiDAR, cameras, ultrasound and moisture sensors as well as, incredibly, a mapping system that is accurate to one centimeter (0.39 inches). Aside from this flotilla of technology, the system also takes the route and traffic signs into account.

This way, it’s able to react to unforeseen traffic conditions and handle them on its own. Essentially, the big Benzes can react to emergencies and avoid them through evasive maneuvers or by braking. Mercedes has taken extra safety precautions. If Drive Pilot were to fail, the system will simply hand over driving responsibility to the driver, and, if said driver doesn’t respond to the request, the system will bring the car to a safe stop.

Here, the Intelligent Drive Controller is constantly calculating the ideal conditions for coming to a halt. The luxury carmaker has a lot of faith in its system; the brand has previously said it will take responsibility for any autonomous crashes.

For now, this technology will remain the preserve of wealthy, tech-loving Germans. However, those in the USA shouldn’t be disappointed – Mercedes is working on bringing Drive Pilot to the states before year-end. Legal requirements permitting, BMW’s fiercest rival hopes to obtain regulatory series approval in California and Nevada.

“Responsible handling of future technologies such as conditional automated driving is the key to acceptance among customers and in society,” said Mercedes board member, Britta Seeger. She adds, “With Drive Pilot, we have developed an innovative technology that, thanks to redundancies with many sensors, enables safe operation and gives the valuable asset ‘time’ back to the customer.”

While the system may not be able to operate under all conditions, it’s still a remarkable achievement. As the years roll by and Mercedes-Benz continues to invest in this technology, we can only expect Drive Pilot to grow stronger and be able to operate on more roads – and at higher speeds. Tesla can take a lesson from this.