Sometimes dream and reality blend into each other. Experience the story of a ride between what is real and what is not. The new EQS in “AWAKE”.

The commercial on the Mercedes-Benz YouTube channel starts with a man who must be dozing off at around 19:25 on a Tuesday evening. He sees indistinct faces and a storm seems to be raging in through the doors and the windows that pop open. A child asks: “Dad, are we home?” and keeps calling him. But when he wakes up, he is behind the wheel of his Mercedes EQS and the Attention Assist beeps to alert him. It does that just in time, right before a corner. A truck comes from the opposite direction. The driver pushes the brake pedal and stops the car before it’s too late. 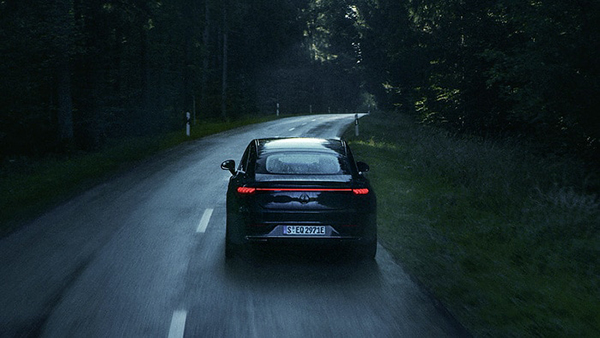 The Attention Assist will know if you are asleep when driving the Mercedes EQS
What the system does in the ad is to detect that the driver has fallen into microsleep, analyzing the driver’s eyelids movements through a camera on the driver’s display, and try to alert him visually and acoustically. The system based on sensors, which is a standard feature for the EQS, suggests taking a break. This move might be life-saving as it is in the 1-minute and 48 seconds-long video. That is because, based on the results of the “Beware of Microsleep” survey, conducted among 1,000 car drivers by TNS Kantar, 26% of the drivers experience microsleep. The video warns that not all of them wake up again.

Mercedes-Benz partnered up with the University of Television and Film in Munich to set up the campaign. The creator of the video, Oliver Bernotat, found inspiration in an incident he went through himself. Comments from people who experienced similar situations poured below the video on YouTube. You might want to check those stories, too, before you get behind the wheel when tired.