Mercedes-Benz said the new electric luxury limousine EQS is not an electric S-Class but the equivalent of the S-Class in the electric segment. We try to draw the first parallel between the two models that represent the standard of luxury. Which offer more? Mercedes EQS 580 4Matic or Mercedes S 500 4Matic long? 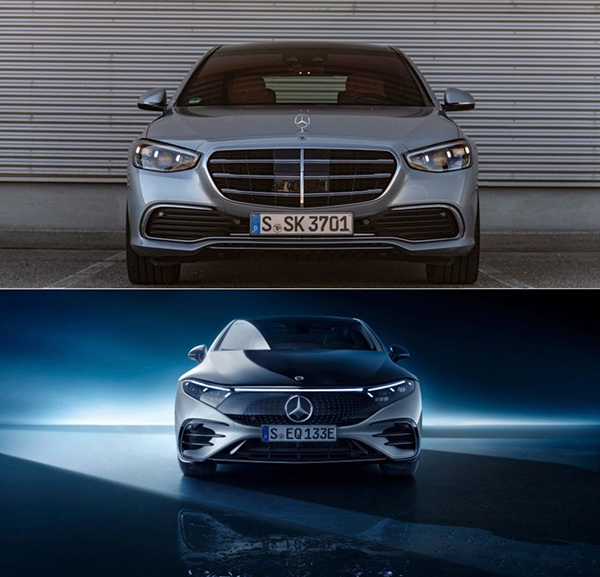 Design and dimensions
The design is completely different, in the case of EQS being dictated by aerodynamics. With a Cd of only 0.20, Mercedes EQS has the best in class aerodynamics. While the new S-Class retains the traditional shape of Mercedes limousines, the EQS looks completely different. The S-Class has a three-volume body while the EQS has a generous tailgate and a two-volume silhouette. It is observed that the EQS has a shorter hood and that the front pillar ends almost in front of the front wheels.

Performance and range
But the big weight disadvantage of the Mercedes EQS 580 4Matic is offset by the power and torque of the permanent magnet synchronous electric motors. The two electric motors deliver 523 HP and 855 Nm and push the luxury electric limousine from 0 to 100 km / h in just 4.3 seconds. In these conditions, the turbine, the small electric compressor and the integrated starter generator from the in-line 6-cylinder turbo engine from Mercedes S 500 4Matic try their best to keep up with the electric model. The S 500 4Matic develops 435 HP and 520 Nm and accelerates from 0 to 100 km / h in 4.9 seconds.

The fact that the acceleration difference is small, only 0.6 seconds, is due to the fact that the electric model is much heavier and its higher power must move a much larger mass.

Probably in corners, the Mercedes EQS is more neutral than the Mercedes S-Class due to the better weight distribution but you will feel the inertia of the extra 520 kg. That’s why the Mercedes S 500 4Matic is probably more agile when cornering. However, it should be noted that the EQS 580 4Matic benefits from a drive train as sophisticated as the one in the S-500 4Matic, ie all-wheel drive, Airmatic air suspension and integral steering (optional on the S 500, standard on the EQS 580 4Matic with 4.5 degree angle).

Mercedes announced the range only for the EQS 450 which has a single engine at the rear axle. The maximum range is 770 km. Certainly, the Mercedes EQS 580 4Matic has less range and we estimate around 600-650 km. By comparison, the Mercedes S 580 4Matic has a range of 663 km due to the relatively small 65-liter tank. 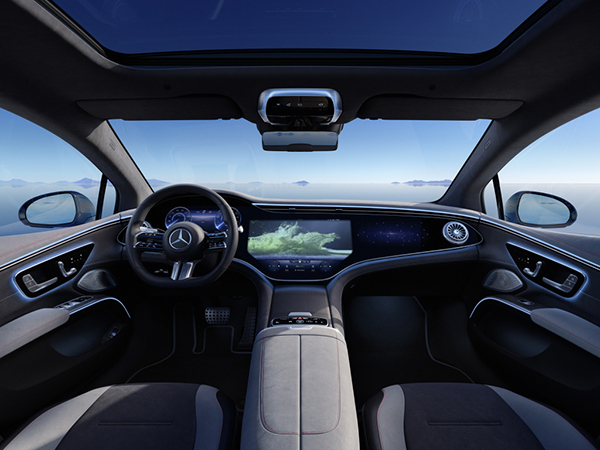 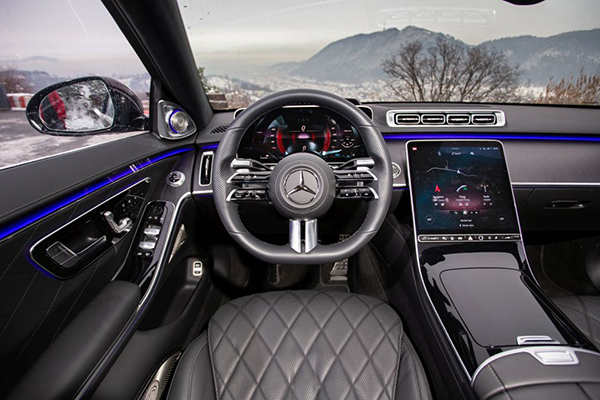 Interior and ergonomics
The interiors of the two models are very modern. If we make the comparison in the basic configuration then there is no difference because the Mercedes EQS comes standard with the 12.8 inch portrait display from the S-Class. Optionally you can command in both models the MBUX systrem with navigation with the revolutionary augmented reality.

Optionally, only the Mercedes EQS can be ordered with the Hyperscreen display, which actually includes three screens under the same glass: one of 12.3 inches for the driver and passenger and one of 17.7 inches for the multimedia system.

Hidden door handles in the body are standard on EQS and optional on S-Class. But in addition to EQS, the driver’s door opens automatically when you get closer to it and from the MBUX system you can open the rear doors also automatically. EQS also has a special sound to warn pedestrians and cyclists. It is generated in real time and takes into account several parameters such as the position of the accelerator pedal and the centrifugal forces. In addition, the EQS MBUX system has several functions specific to electric propulsion.

Prices
Currently, the long Mercedes S 500 4Matic costs 123,272.10 euros. Mercedes has not yet announced the prices of the EQS 580 4Matic but takiong into consideration the higher power and the fact that the EQS is slightly better equipped in standard, we believe that the EQS 580 4Matic will cost around 130,000 euros. But we have to wait for the official prices that will appear soon because the new Mercedes EQS will be available starting in August 2021.