This is a Mercedes S600 V12 with incredibly swirled paint in the AMMO Studio for its first wash in 8 years. The S600 was owned by my friend Levin’s grandparents and has sat in their garage for quite sometime. The S600 was covered in a thick layer of dust and spiderwebs. The interior reeked of mothballs and the black paint had swirls + holograms everywhere. To correct this “detailer’s signature” I performed a two-step correction which had an incredible before & after. With the goal, to get the S600 back on the road, we also had to get it started and driving once again. Enjoy the full transformation of this V12 beast! – L

First Wash In 8 Years: Mercedes S600 V12 Swirled Paint Best Before and After!

Initially scheduled to be introduced in 1989, the W140 was delayed when BMW introduced the E32 in 1986, with the first post-war German passenger V12 engine, the M70. By delaying the announcement of the W140, Mercedes managed to develop their own V12 and upgrade their brake system.

This particular 1994 Mercedes S600 V12 (W140) has been gathering dust and spiderwebs for the past eight years. It was only driven around for about ten years, but the owner fell ill and the car was left untouched since. The bodywork had paint swirls all over the place and needed a lot of polishing to fix. With the interior reeking of mothballs and white mold everywhere – including under the hood – Larry Kosilla brought the car to his shop and went to work.

Wheels had to go so he could power wash the wheel wells, calipers, and suspension, along with the undercarriage, to remove the junk.

For the exterior paint, thorough foaming with extra attention to detail, followed by a good rinse and dry was just what the car needed. As for the wheels, no amount of product could get them in their initial state. Still, they looked a lot better after a good clean. 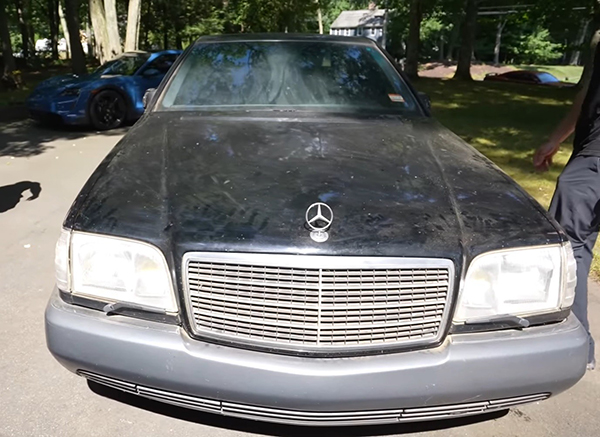 A sodium chloride tablet helped kill the smell inside the car, before cleaning, steaming, disinfecting, and power washing every last thing.

Outside, the paint was filled with holograms (aka “detailer’s signature”) caused by tilted rotary polishers. According to Larry, a two-step process was required to fix it.

Surprisingly, the hood had almost double the amount of paint as the rest of the car. Moreover, the passenger side had some deep scratches that couldn’t be polished, hence needing a touch-up to fix.

After polishing the entire bodywork, along with the rims, the car was finally looking better than ever, but it didn’t run – a problem that was ultimately solved with some additional professional help and some new parts.

Now the only thing remaining was to put this Mercedes in a new home.