A pioneer of modern design and a technology trendsetter with airbags, optimised aerodynamics and deliberate weight reduction: this is what the 126 series Mercedes-Benz S-Class stood for, presented 40 years ago in September 1979 at the International Motor Show (IAA) in Frankfurt am Main. The luxury saloons and coupés of this series, built from 1981 onwards, are popular young classics of the brand. 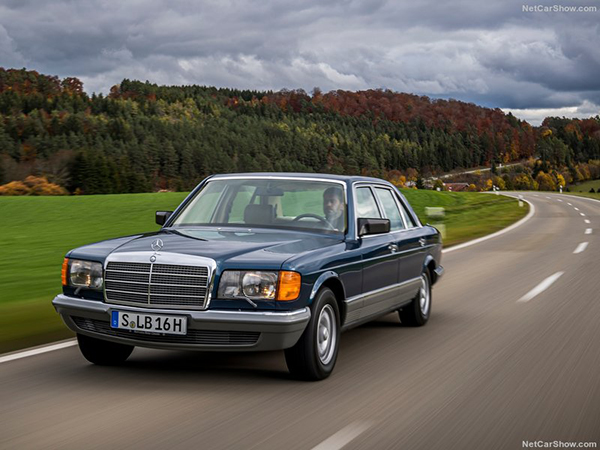 Premiere
In September 1979, Mercedes-Benz unveiled its new generation of luxury-class saloons at the IAA in Frankfurt – the S-Class (model series 126). The range initially comprised seven models; there was a choice of four engines (from the 2.8-litre six-cylinder carburettor engine with 115 kW/156 hp to the 5.0-litre V8 light-alloy engine with petrol injection and 176 kW/240 hp) and two body variants – in addition to the normal version, there was a long-wheelbase version, as had been offered for the past two generations of luxury saloons. At 140 millimetres, the increase in wheelbase was more pronounced than before (3,075 millimetres instead of 2,935 millimetres) and, as usual, solely improved the rear legroom and the access width of the rear doors.

Timeless elegance
So to speak, the characteristic design features of the new S-Class can be found below the waistline. For the first time, a Mercedes-Benz passenger car did not have conventional bumpers, but generously dimensioned, plastic-coated bumpers that had been seamlessly integrated into the front and rear aprons. A visual link between the front and rear aprons was provided by wide plastic side protection panels located between the wheel arches at bumper level. 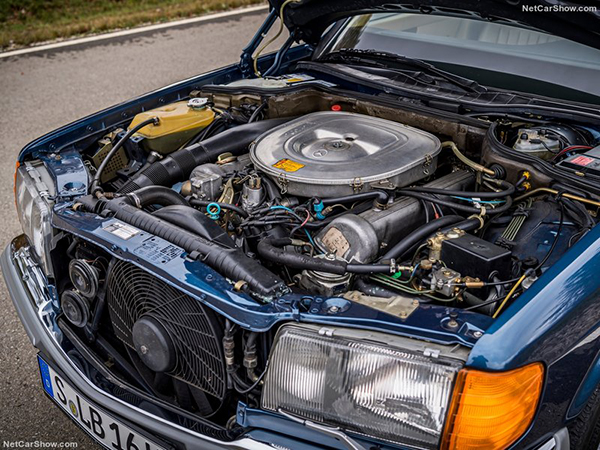 Engines
The two eight-cylinder engines used in the predecessor series 116 were replaced by two re-engineered units with increased displacement and light alloy crankcases. The 5.0-litre engine, which replaced the 4.5-litre grey cast iron engine, had already made its début in the 450 SLC 5.0 (C 107), while the 3.8-litre light-alloy engine was developed from the 3.5-litre V8 with the grey cast iron block. Combining greater output with lower weight, the new V8 engines offered much improved performance and better fuel economy. The carburettor and injection versions of the 2.8-litre six-cylinder engines remained unchanged in the series. A diesel version of the 126 series was once again available for export to the US. Like its predecessor, the 300 SD turbodiesel offered a turbocharged 3.0-litre five-cylinder engine, but its output was increased by 7.4 kW (10 hp) to 92 kW (125 hp).

Better efficiency
Throughout the development of the new series, methods of reducing energy consumption while increasing driving comfort and safety were at the forefront. The use of weight-reducing materials and optimised aerodynamics helped the new S-Class achieve a ten per cent reduction in fuel consumption compared with its predecessors.

Less drag
From the 1970s onwards, during the first major oil crisis, the issue of aerodynamics gained considerably in importance. The 126 series was the first Mercedes-Benz production vehicle to be consistently developed and designed with aerodynamics in mind. The result was that, with a cd rating of 0.36 at the end of the 1970s, it already occupied a leading position in its segment by international standards. In the predecessor series 116, the cd rating had been 0.41.

Restraint systems
In 1981, the driver airbag celebrated its world premiere in the 126 series. Initially, it had been available as an optional extra and offered considerably better protection against injury in the event of a frontal collision in conjunction with the safety belt. From the same year, Mercedes-Benz also offered the seatbelt pretensioner for the front passenger as an optional extra. This system effectively reduced the slack in the seat belt so that it held the person more firmly in the seat in the event of an impending collision. In 1988, the series also saw the world premiere of the passenger airbag when the model was upgraded. 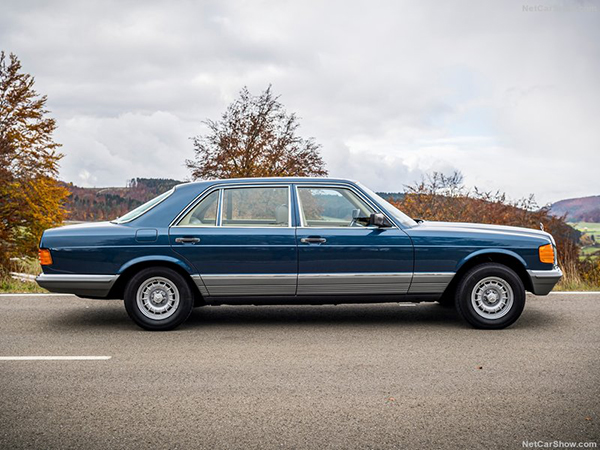 Crash safety
The bodyshell was designed to reflect the latest safety research findings. Thanks to new design principles, the passenger cell was able to withstand an offset crash undamaged – at a collision speed of 55 km/h – although it weighed less than in the 116 series. The 126-series saloons were the world’s first production vehicles to meet the criteria for asymmetric frontal collisions.

Details for improved safety
There were numerous other safety features. For example, there was the electrically adjustable steering column (optional from 1985), the automatic limited-slip differential for the six-cylinder models and acceleration skid control for the V8 models (all optional features from 1985). 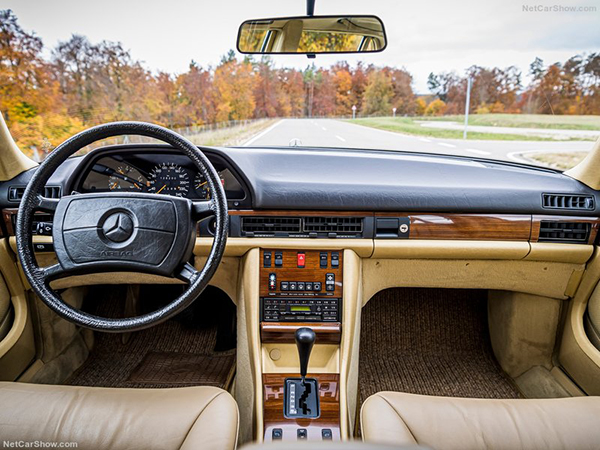 Facelift
Four years after the launch of the energy-saving concept, an extensive model facelift was carried out, so that in September 1985 and again at the IAA in Frankfurt, Mercedes-Benz presented a completely revised model range of the 126 series. Its visual appearance was discreetly revised, primarily with regard to the bumpers and side protection panels, but also the wheels, which were upgraded from 14 to 15 inches. This also included an improved safety aspect, as larger brake discs could now be accommodated as a result. The focus, however, was on restructuring the engine options, in the course of which the S-Class was given two newly designed six-cylinder engines, which had débuted in the mid-size 124 series nine months earlier. A new addition to the range was a 4.2-litre V8 engine, which had been created by boring out the 3.8-litre engine. The 5.0-litre engine was also modified and was now equipped with an electronic ignition system and the Bosch “KE-Jetronic” electronically controlled mechanical fuel injection system which helped it generate an output of 180 kW (245 hp). The diesel export model was replaced by the new 300 SDL with 110 kW (150 hp). 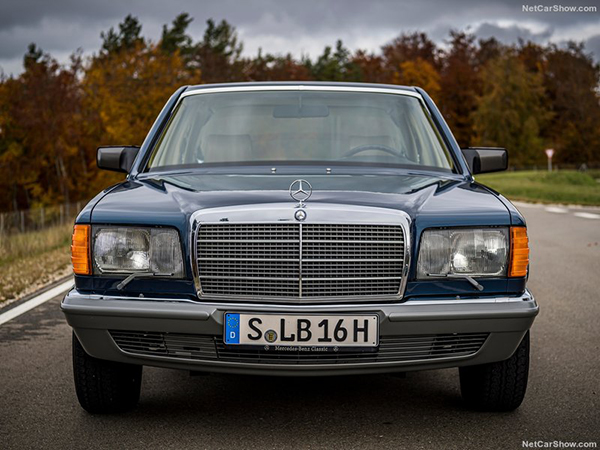 Emission control
In the course of model facelifts, a controlled emission control system with a three-way catalytic converter was available on request for all variants of the revised model range with the exception of the 5.6-litre models’ ECE versions. The standard version was supplied as a catalyst retrofit version, in which the vehicle was delivered without a catalytic converter and lambda sensor, but with the multifunctional mix preparation and ignition system. Retrofitting a controlled catalytic converter to a retrofit vehicle could be carried out easily at any time. This arrangement gave the customer the greatest possible flexibility in determining the time of conversion – bearing in mind that, in the 1980s, this was a considerable advantage as the supply of unleaded fuel was not yet guaranteed everywhere. From September 1986, the controlled catalytic converter became standard equipment in all Mercedes-Benz passenger car models with internal combustion petrol engines; retrofit vehicles continued to be available on request until August 1989, at a corresponding price discount. 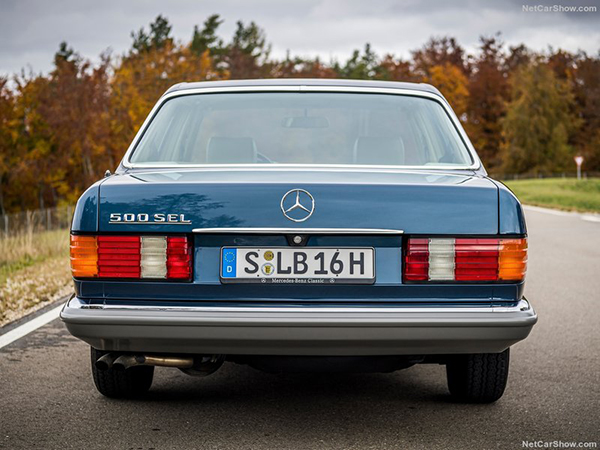 Engine with 5.6-litre engine capacity
The most spectacular innovation in the engine range was a 5.6-litre eight-cylinder engine developed from the 5.0-litre V8 by extending the stroke, which generated an output of 200 kW (272 hp). On request, there was even a version with higher compression which allowed for 221 kW (300 hp) but was not available with a controlled emission control system. Even without a catalytic converter, this “ECE version” met the exhaust emission limits set by the European Economic Commission (ECE). At their release the 560 SEL equipped with this engine variant and the coupé 560 SEC were the most powerful Mercedes-Benz production passenger cars built up to that time.

Production success
By 1991, a total of 818,036 of these saloons had left the production halls in Sindelfingen within the twelve-year production period. From 1981 to 1991, 74,060 SEC coupés (C 126) were also built. This made the 126 series the most successful luxury class series in the company’s history.