In September 1972, Mercedes-Benz premiered not only a new generation of its flagship luxury-class vehicle but also a new name – the sedans were now officially known as the Mercedes-Benz S-Class. The ‘S’ abbreviation for top-of-the-line Mercedes-Benz models had been in use since 1949. But now, the ‘S’ (not to be confused with the supercharged cars of the 1920s) had become the badge for an entire family of cars. In 1993, the nomenclature was extended to include other cars in the Mercedes-Benz range, beginning with the C-Class, E-Class, and G-Class. 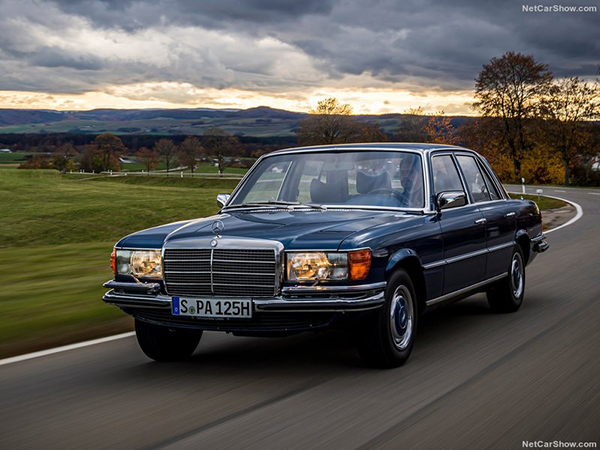 Long before the S-Class was given its official designation, however, the reputation of the Mercedes-Benz brand for offering high-end vehicles with an emphasis on luxury, comfort, and safety had been firmly established. The direct ancestral line of the S-Class begins in the post-war period with the Mercedes-Benz 220 (W 187, 1951 to 1954). Before the Second World War, it comprises an unbroken heritage of several model series that were developed in parallel and which date back to the origins of the Mercedes brand in the early 20th century. An early and eye-catching example is the Mercedes-Simplex 60 hp launched in 1903. The then top-of-the-range model is now one of the finest exhibits in the Mercedes-Benz Classic collection. The elegant and luxurious touring sedan from 1904 was once the personal property of Emil Jellinek, a key protagonist in the story of the Mercedes brand. 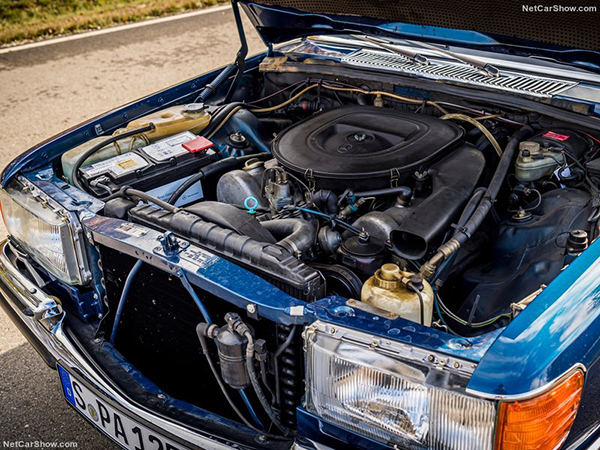 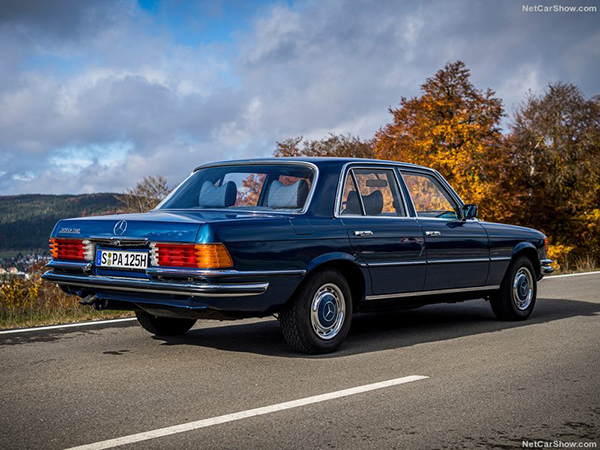 Model features, major innovations
One noteworthy engineering innovation first featured as standard in the 116 series sedans was the double-wishbone front suspension with zero-offset steering and anti-dive control, as trialled in the C 111 prototype. This greatly improved how the vehicle handled and thus represented a significant advance in active driving safety. The rear suspension of the models with the 2.8-litre and 3.5-litre engines was more or less the same as the diagonal swing arm type that had proven its worth over many years in the W 114/115 ‘Stroke Eight’ models and which had also been in use in the 350 SL since 1971. The 4.5-litre models were fitted with a coupled-link axle – a specially designed version of the diagonal swing rear axle that prevented the vehicle rear from dipping when driving off and accelerating.

In terms of passive safety, too, the S-Class with its integrated safety concept was at the engineering forefront. The fuel tank, for example, was no longer positioned in the rear end but above the rear axle to protect it from collisions. In the interior, maximum protection was offered by the heavily padded instrument panel, yielding or recessed switches and levers, and a four-spoke safety steering wheel with impact absorber and broad padded boss. The most significant improvement over the preceding series was an even stronger safety passenger cell with stiffened roof-frame design, high-strength rigid roof and door pillars, and reinforced doors. By controlling the deformability of the front and rear end, it was possible to greatly improve energy absorption in the front and rear crumple zones.

Special wind deflectors on the A-pillars guaranteed good visibility. In wet conditions these served as channels for dirty water, keeping the side windows clean in bad weather. Other safety features included wrap-around indicators that were highly visible even from the sides, and large rear lights, whose ribbed surface profile offered excellent resistance against dirt. 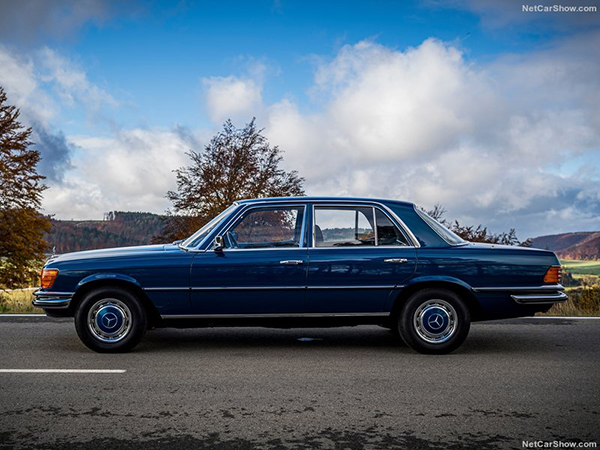 New flagship model: the 450 SEL 6.9
In May 1975, Mercedes-Benz unveiled the 450 SEL 6.9 – the new flagship model in the series and true successor to its spectacular 300 SEL 6.3 (W 109) high-performance sedan. The powerful 6.9-litre V8-engine, developed from the highly successful 6.3-litre unit of its predecessor, achieved an output of 210 kW (286 hp) and maximum torque of 56 mkg (549 newton metres). The self-levelling hydropneumatic suspension – featured for the first time in a Mercedes-Benz passenger car – guaranteed the utmost in ride comfort. Other features included in the standard specification for this top-of-the-range model were the central locking system, air-conditioning and headlight wiper system. As was the case with its direct predecessor, the 450 SEL 6.9 proved an immediate success; although it was more than twice as expensive as the 350 SE, a total of 7380 units were built during its four-and-a-half year production run. 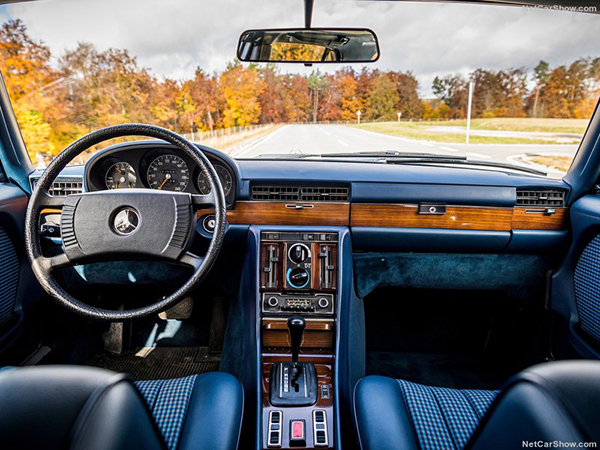 The 300 SD: a diesel in the luxury class
In May 1978, the model range of the model series 116 was expanded even further. As the latest addition to the family, the 300 SD attracted just as much attention among connoisseurs as the 450 SEL 6.9 had done three years earlier, despite its position at the opposite end of the performance scale. For the first time in the history of this vehicle category, the new S-Class was powered by a diesel engine – making it a trendsetter way ahead of its time. The 3.0-litre five-cylinder unit, which had proved so successful in the mid-range 240 D 3.0 (80 hp/59 kW) model, was given a turbocharger for its new assignment in the S-Class, increasing the output to 85 kW (115 hp).

Development of this unusual S-Class variant, available exclusively in the USA and Canada, was a response to the fuel consumption standards that had recently been introduced by the US government. The critical factor here was the ‘Corporate Average Fuel Economy’, an invention of the Carter administration, which denoted the average fuel consumption of all passenger car models in a manufacturer’s range. By extending the range to include diesel models, which were traditionally more economical, it was possible to bring the fleet’s average fuel consumption under the legal limit.

Braking and steering: ABS – a global innovation
The ABS anti-lock braking system, an engineering innovation of significance that points the way ahead, was offered as a world exclusive in the S-Class sedans (model series 116) from autumn 1978. Developed in collaboration with Bosch, it ensured that the vehicle would respond fully to the driver’s steering action even in an emergency brake situation, thus making a vital contribution to active safety. The market launch of ABS was seen as nothing short of sensational at the time. Today, it is almost universally present across all segments and has been available even in small cars for many years. 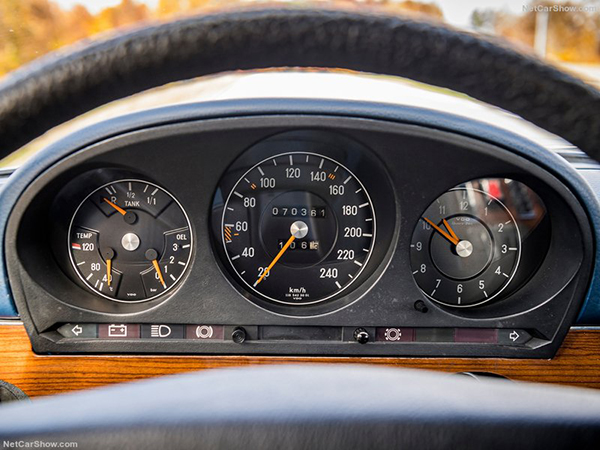 S-Class with special protection
Safety of a rather different nature was offered by the armoured version of the 116 model series. The existing technology had undergone improvements based on the experience gained during development of the armoured 280 SEL 3.5 (W 108). Taking the eight-cylinder models as a whole – the 350 SE, 350 SEL, 450 SE, and 450 SEL – a total of 292 units were built as armoured vehicles for delivery to a select group of clients, including many state institutions in Europe and overseas.

Unit sales of 473,035 for the S-Class sedan model series 116
The successors to the first S-Class series – the model series 126 – were unveiled in September 1979 at the International Motor Show in Frankfurt. Production of the various model series 116 was gradually phased out between April and September 1980. Of the 473,035 units built in this model series, the last vehicle to undergo final inspection at the Sindelfingen plant was a 300 SD. The most successful variant in the series has been the 280 SE sedan (150,593 units), compared with sales of 4,266 units for the 350 SEL model. The 300 SD, made for the North American market, sold a total of 28,634 times.

The new model series set new standards in the luxury car segment right from the start and its new name proved an instant success as well – going on to transcend its meaning within the automotive world. The S-Class designation soon became the ultimate superlative. If something was described as ‘the S-Class of its field’ you knew that it was the best of the best. Another great achievement by Mercedes-Benz.