Mercedes-Benz delivered 520,100 vehicles in the third quarter of this year and of these, a significant chunk were sold in China. 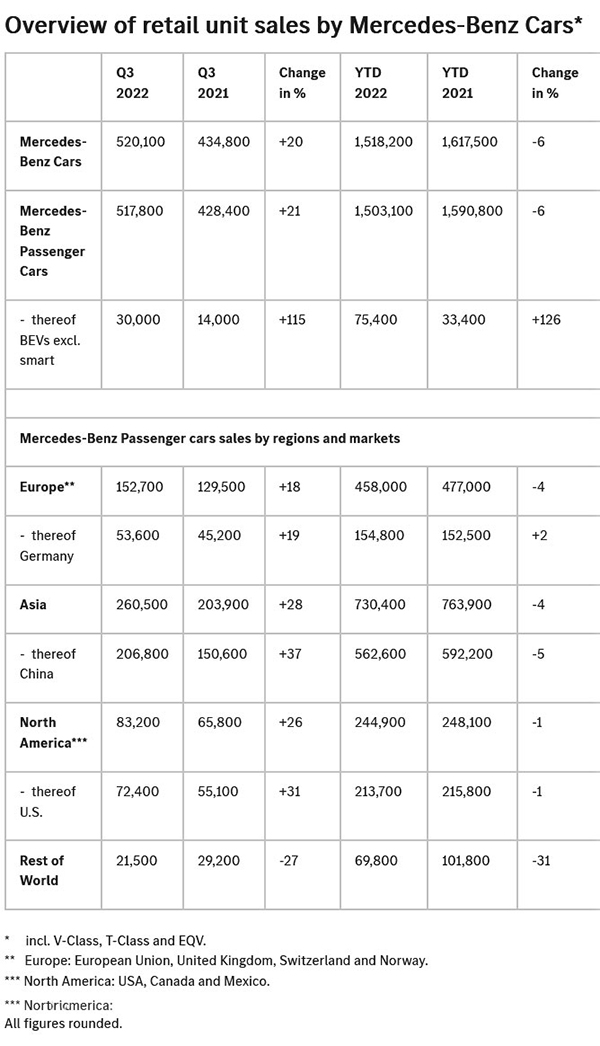 The German automaker’s sales jumped 20 per cent this quarter that ended in September, rising from 434,800 in Q3 2021 and bringing this year’s tally up to 1,518,200 units. These figures include sales of the V-Class, T-Class, and all-electric EQV.

China remains one of the brand’s most important markets. Mercedes sold 206,800 vehicles in the country in the July to September period, easily outselling Europe where 152,700 vehicles were delivered and North America where 83,200 units were sold. Indeed, deliveries in China were almost three times the 72,400 vehicles sold in the United States during Q3.

Sales in China skyrocketed by 37 per cent this quarter from the 150,600 units sold during the same period last year. Despite this, Chinese sales are actually down 5 per cent from the first nine months of 2021 to 562,600 units.

All of these sales figures have been rounded to the nearest hundred by Mercedes-Benz.

“In a challenging business environment – primarily defined by ongoing semiconductor shortages – we continue to see robust demand for Mercedes-Benz resulting in the strongest sales quarter this year,” member of the Board of Management of Mercedes-Benz Group AG, responsible for Mercedes-Benz Cars Marketing and Sales, Brittta Seeger said. “With the EQS SUV and EQE SUV, which celebrates its premiere in Paris on October, 16th, our customers can choose a fully electric vehicle in every segment served by Mercedes-Benz. We offer a choice of eight all-electric Mercedes-Benz models – more than any of our competitors.”

In the United States, exactly 72,389 vehicles were delivered by Mercedes-Benz Passenger Cars while a further 15,293 Mercedes-Benz vans were sold. This represents a 23.2 per cent increase over the same period last year.

The most popular Mercedes-Benz model in the U.S. is the GLC with 19,456 units, followed by the GLE with 13,802 and the C-Class with 8,980 vehicles landing in the hands of customers.