Yesterday I visited the Nürburgring where I spied this Mercedes CLE 63 AMG. Enjoy the video. Let me know what you think of the sound!

Development is well underway for the new Mercedes CLE-Class, which is expected to replace two-door versions of the C-Class and E-Class. That applies to hotter AMG models as well, and a new video from Carspotter Jeroen on YouTube provides our first live look at what should be the AMG CLE 63 in action.

The video comes barely a day after our spy photographers caught the same AMG prototype in Germany. The video catches the posh coupe around and on the Nurburgring, where we see it aggressively slicing through the track. As you’d expect from AMG, the prototype looks flat and fast but one thing very non-AMG about it is the sound. A hopped-up Mercedes-AMG with quad pipes like this would normally bellow a clear V8 tune, but the primary sound on the track is the squeal of tortured tires.

That’s because we expect the AMG CLE 63 to brandish the same hybrid powertrain found in the new Mercedes-AMG C63 S E Performance. To refresh your memory, that fuses a rear-mounted electric motor with a bonkers turbocharged 2.0-liter four-cylinder engine at the front. The engine alone is good for 476 horsepower, making it the most powerful production four-pot ever offered. The entire powertrain generates 671 hp, driving all four wheels with enough punch to send the C63 to 60 mph in 3.3 seconds. 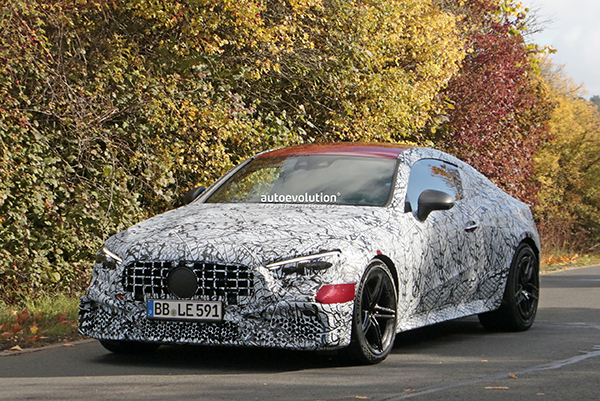 This particular prototype is easily identified as a range-topping AMG model thanks to the Panamericana grille up front and squared-off quad-exhaust tips at the back. Camouflage wrap still hides smaller details, and heavier covers in front conceal the specifics for the lower fascia, but there’s no missing the sleek lines of the new coupe. When everything comes off, styling cues similar to the C63 sedan are a safe bet.

Speaking of which, we’ve had many CLE-Class prototype sightings going back well over a year now. Now that an AMG test vehicle is in the mix, we are likely getting closer to a reveal. That could happen before the end of the year, though the AMG will likely be a 2024 model.