It’s often said that racing is used as a testbed for road car technology. Sure, it’s a cliche that gets thrown around quite a lot, but it’s still accurate. With DOFTEK’s recently released variable alignment system for the road, it gave us a deja vu moment to pre-season Formula 1 testing when Mercedes had come up with its ingenious dual-axis steering system (DAS). 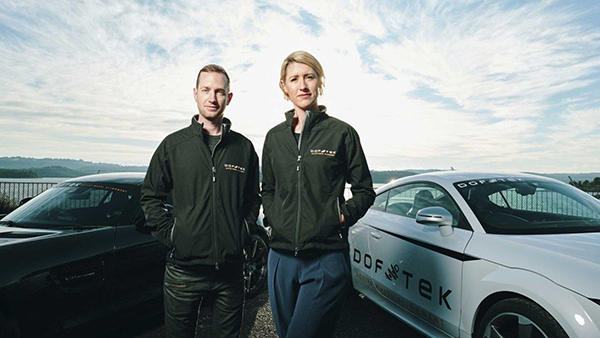 While we’re unsure if this is a direct trickle-down idea, it follows the same principles of the unit seen on Mercedes’ latest Formula 1 challenger. While many are unsure of precisely what the F1 system does, it is believed that Lewis Hamilton and Valterri Bottas have the ability to change the toe of the front wheels by pushing or pulling on the steering wheel. At first glance, it appeared they were preparing for takeoff, but all jokes aside, DOFTEK’s adaptive wheel alignment system (AWAS) is essentially a more advanced version of what we’ve seen on the race car.

“Cars today are so sophisticated that they have electronic control for everything, except the most important thing that controls contact with the road – wheel alignment,” says Doftek inventor and co-founder Geoff Rogers.

So what advantages does the automated alignment system provide on the road? In a highway driving situation, rolling resistance and fuel consumption are paramount. It’s no surprise that hard cornering on the highway is very rare outside of an emergency situation. That said, performance isn’t just an afterthought for the Australian company; the system is estimated to improve handling by at least 15% while simultaneously reducing tire wear and rolling resistance by 10%.

Although the system hasn’t been production-implemented yet, it gives us a peek at what exciting road technologies lie ahead.