Mercedes already makes one expensive SUV that’s very popular, the AMG G63. However, it just couldn’t resist going after the Cullinan crowd with the first-ever Maybach SUV. People tend to judge this book by its cover, so today we’ll find out if it’s got enough features to compete.

And who better for that job than the master of “quirks and features” himself, Doug DeMuro. He points out that while this has about 550 horsepower from a potent twin-turbo V8 engine, it’s not meant to be enjoyed from behind the wheel. And that could be a problem, as many Americans who can afford such a vehicle want to be behind the wheel.

As you can probably tell, revisions have been made in the cosmetic department too. The Maybach has a special grille design and large mesh sections in the bumper. The problem is they can’t use metal because of pedestrian safety so it might look a little cheap to some eyes. 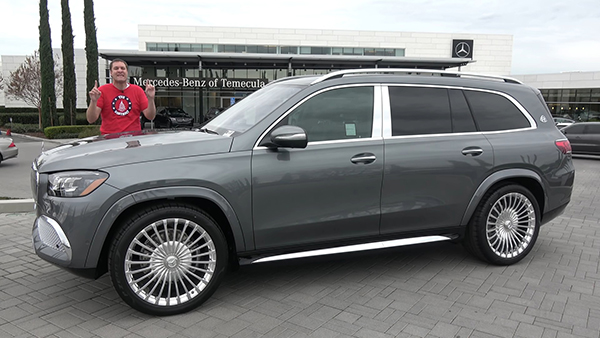 So far, it’s not looking good, but Mercedes did put one feature on the Maybach SUV that nobody else has. We’re talking about the bouncing suspension that’s also offered on the GLE and the regular GLS models. Officially called Free Driving Assist, the feature was meant to get you unstuck when off-roading, but people use it for fun, and that’s what DeMuro did too.

He argues that it’s just a flex for people to use on social media. The whole car is a flex, from the ultra-expensive rear sets with insane levels of adjustment to the tech jammed into the cockpit area. And that’s where the idea of the Maybach GLS starts falling apart because there are more powerful, more expensive, and more interesting SUVs out there. Does it have enough quirks and features to compete with the Rolls-Royce Cullinan? Let us know in the comments.