Ultra-luxury vehicles are often tasked with riding a very fine line between elegance and spectacle. On one hand, a primary mission of the breed is to stand out as a cut above garden-variety posh. But doing so without looking garish can be a tricky endeavor, and that seems to be a growing concern for designers and product planners in these increasingly enlightened times.

But before our time behind the wheel of one of the market’s latest high-luxe options, the Mercedes-Maybach GLS 600, the company chauffeured us to a private residence in Malibu, California, in the back seat.

Along the way we watched a few videos on the seatback-mounted, not-for-North America touchscreen, after hearing from Mercedes-Benz executive Adam Chamberlain and American designer Virgil Abloh about their perspectives on modern luxury, we were treated to a walkaround of the vehicle by none other than Chris Bridges. You may know him as Ludacris, the rapper and actor whose career highlights in the latter realm include his recurring role in the Fast and Furious movie franchise.

For a moment, Bridges’ glee at elements like the GLS’s 23-inch wheels and the lowrider-like bouncing action of the Off-Road Recovery Mode feature seemed a bit incongruous with the sophisticated luxury philosophies that were outlined in detail by Chamberlain and Abloh moments before. But for Maybach, a sub-brand within an automaker that’s already known for its emphasis on luxury, that dichotomy is an important component of its identity within the ultra-luxe ecosystem. 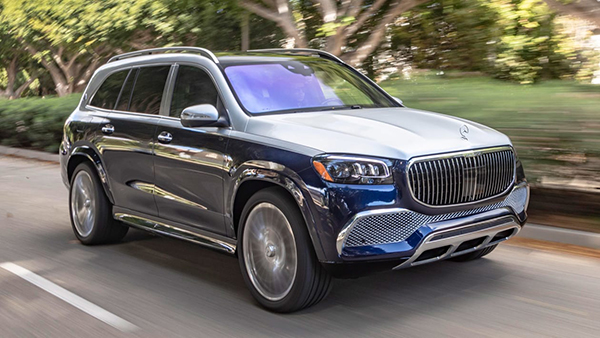 Technological Powerhouse
The lion’s share of hardware in the Maybach GLS 600 is derived from its Mercedes-Benz counterpart, the GLS 580, and that undoubtedly works to the benefit of the flagship SUV. Under the hood is an AMG-developed, twin-turbocharged 4.0-liter V8 that serves up 550 horsepower and 538 pound-feet of torque, along with EQ Boost, a 48-volt mild-hybrid system that can provide 21 horsepower and 184 pound-feet of torque to fill in low-RPM areas of the powerband where turbo lag might otherwise intrude.

Paired with a nine-speed automatic transmission that sends power to all four corners through the 4Matic all-wheel-drive system, the GLS 600 hits 60 miles per hour in 4.8 seconds, on its way to an electronically limited 130-mph top speed. While that’s impressive for a vehicle of this size, here performance ultimately takes a back seat to luxury – by design.

The lion’s share of hardware in the Maybach GLS 600 is derived from its Mercedes-Benz counterpart, the GLS 580, and that undoubtedly works to the benefit of the flagship SUV.

If Mercedes-Benz gives equal emphasis to luxury and performance and Mercedes-AMG leans harder on the performance side, Mercedes-Maybach purposefully swings the pendulum in the opposite direction. Engineers recalibrated the standard GLS’ air suspension for compliance rather than corner-carving, aided by the E-Active Body Control system that’s equipped as standard.

The system allows for spring and damping forces to be individually controlled at each wheel and can scan the road surface to adjust the suspension for upcoming bumps and undulations in order to minimize body movement. In the Curve driving mode, the system can also lean the vehicle’s suspension into a turn by up to 3.0 degrees, much like a motorcycle, to reduce the amount of lateral load and jostling felt by the vehicle occupants.

But let’s not forget that the GLS 600 is indeed a sport-utility vehicle, so along with its 7,700-pound tow rating, there’s also an Off-Road mode that raises the air suspension for more ground clearance and dials in the throttle response and traction control system to maximize stability where the pavement ends. And that “bounce mode” we mentioned earlier? It’s technically supposed to help get the GLS out of deep sand if it gets stuck. In the real world, it’s more for Instagram than Atacama.

Technology is ever-present in the GLS 600’s cabin, from the large head-up display and the wireless phone chargers for both front and rear passengers to the Burmester 3D audio sound system and the MBUX infotainment system, all of which are also standard equipment. That last piece consists of a 12.3-inch digital instrument cluster alongside a 12.3-inch touchscreen infotainment system with navigation that offers an augmented video overlay feature. Rear seat passengers can even interact with the MBUX system by way of an included 7.0-inch tablet. 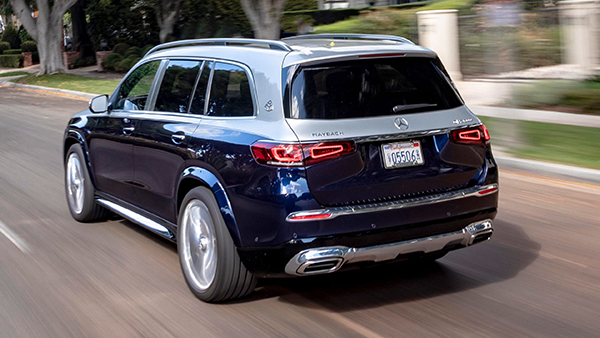 In the real world, Bounce Mode is more for Instagram than Atacama
The latest suite of Mercedes-Benz driver assistance systems are also on hand and include, among other features, Active Distance Assist, Active Steering Assist, and Active Lane Change Assist. When used in conjunction with one another, these can provide semi-autonomous driving functions akin to Cadillac Super Cruise, but the system will scold you if you take your hands off of the wheel for too long.

The Maybach Treatment
While the technology powering the GLS 600 is impressive, it’s the wholly exclusive elements that provide it with a distinct character. And that starts with the styling. 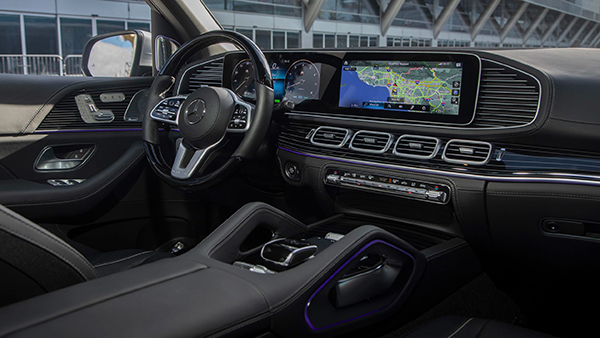 Mercedes-Maybach hasn’t been shy with the bling here – unique 22-inch wheels come standard, although Ludacris-approved 23s are optional, and there’s no shortage of chrome from stem to stern. A Maybach-exclusive grille with vertical louvers dominates the front end, and retracting running boards greet you each time you step into and out of the vehicle, while a standing Mercedes-Benz star adorns the hood for the first time on one of the automaker’s SUVs. And of yes, a two-tone paint option is available. The changes don’t reinvent the look of the GLS, but they do make it stand out. Whether or not it’s for the right reasons is largely subjective.

Inside, some exclusive touches go beyond the leather headliner and the Maybach branding to make the GLS 600 feel like something special. A number of these features focus on the rear seat passengers specifically, like the exclusive Maybach drive mode that ensures the second-row VIPs feel as little body movement from the car as possible.

Comfort mode is designed to provide a balanced ride for everyone in the vehicle, but hey, who’s paying the bills here?

The GLS 600 comes as either a five-seater or four, with rear Executive chairs and a center armrest taking the place of the middle seat for those willing to forego the extra spot. Third row seating is out, though – to increase rear passenger legroom and further improve noise isolation, Mercedes installed a rigid partition and parcel shelf behind the second row seats.

Heating, ventilation, and massage functions are also part of the deal for rear passengers, as are heated and cooled cup holders. Folding tables are optional, and if you really want to elevate your baller status, you can also spring for the refrigerated storage compartment and champagne flutes with built-in holders. 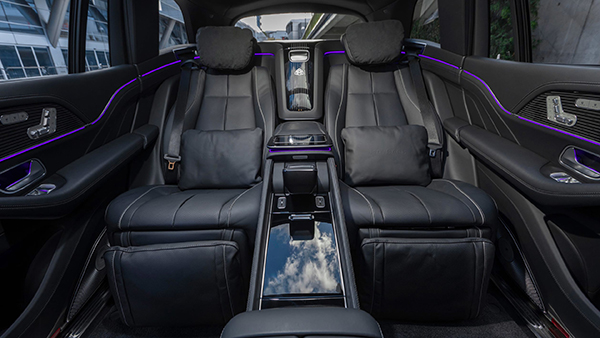 Behind The Wheel
Typically when an automaker combines a large, high-riding vehicle with an eminently compliant suspension, it’s a recipe for a lumbering barge of a machine that feels top-heavy and wayward. The narrow, winding roads of the Malibu hills should, in theory, emphasize this issue in the GLS 600. But not long after we settled in at the helm, it became evident that some engineering magic is present. While we were always cognizant of the SUV’s sheer size, it never felt like we were waiting for the chassis to catch up with our inputs or settle into a corner, even with Comfort drive mode set.

There’s a Sport mode as well, which firms up the suspension and alters the transmission’s shift points for more response. There’s certainly enough forward thrust available from the boosted V8 to justify it, and the presence of a manual shifting mode and steering wheel-mounted paddles bring the key components of the formula together, but the GLS 600 really just isn’t intended for those who are in a hurry.

While we were always cognizant of the SUV’s sheer size, it never felt like we were waiting for the chassis to catch up with our inputs.

Curve mode, on the other hand, suits this SUV perfectly. There’s enough compliance to maintain the cloud-like ride quality of Comfort mode, and the suspension’s ability to lean into a turn creates the perception of flat, stable cornering without introducing harshness if you should encounter a mid-corner bump.

Whether you’re up front or in the back, road noise is virtually non-existent in the Maybach, and aside from the occasional growl of the V8 downshifting to pass or climb a hill, auditory distractions are few and far between. That seems to put more attention on the raft of technology available in the vehicle, some of which works brilliantly, while other elements could still use a bit of polish.

As we’ve seen in other recent Mercedes-Benz vehicles, the MBUX system is responsive and sharp-looking, and we found the augmented video overlay navigation feature is legitimately useful on unfamiliar roads. The MBUX menu system can get a bit convoluted though, and some functions required a significant amount of hunting due to what can seem like ambiguous placement. 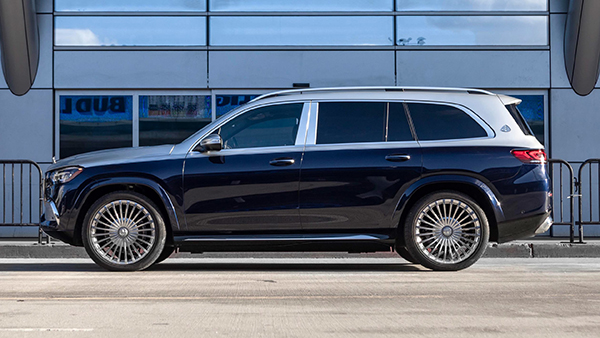 The aforementioned Active Distance Assist, Active Steering Assist, and Active Lane Change Assist came in handy when we encountered LA rush-hour traffic and worked largely as intended, though we did feel the need to provide some steering intervention on some tight, close-quarters sections of freeway. We also disabled the over-active haptic nagging of Active Lane Keeping Assist not long after we started our drive – its high expectations of our lane centering capability just weren’t realistic in a vehicle of this size.

The real question, however, is whether or not the $160,500 GLS 600 delivers on the implied promise that the Maybach badge implies. We already know that the Mercedes-Benz GLS 580 is a strong platform to start from, and many of the notable features and strengths of the Maybach are also available in its MB counterpart. Opulence and exclusivity are harder metrics to quantify, and the GLS 600 serves as proof that noticeably elevating those characteristics in a vehicle that’s already luxurious can sometimes come at the cost of measured subtlety.

But as Bridges deftly illustrated, perhaps that’s kind of the point here: If you’re going to lure buyers away from the ingrained cachet of vehicles like the Range Rover SVAutobiography and Bentley Bentayga, you might need to make a bit more noise. 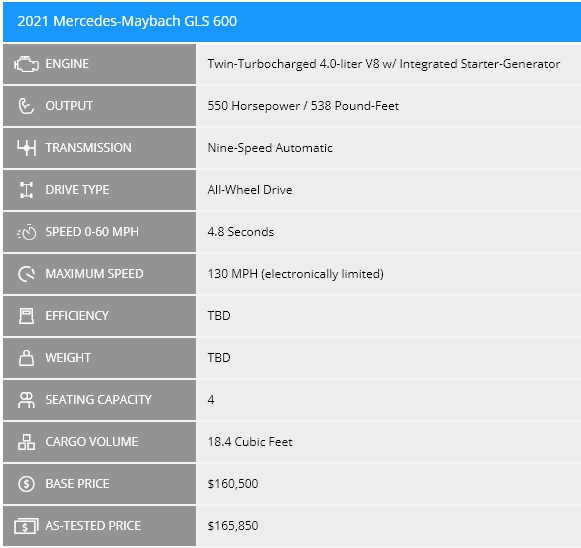