Just hearing the word “Maybach” instantly transports me to a star-studded red carpet event or a glitzy music video brimming with champagne and beautiful people. The brand’s revival in 1997 via the 57 Concept established Maybach as the last word in German luxury, and it’s essentially maintained that status on and off over the past 25 years.

The 2021 Mercedes-Maybach GLS 600 marks a new era for the iconic brand as Maybach’s first crossover. Taking the fight directly to fellow relative newcomers like the Rolls-Royce Cullinan and Bentley Bentayga – both already booming with sales – the Maybach GLS needs to be more than just a Mercedes-Benz on steroids to stand out. And it both is and isn’t.

Chrome features catch your eye before even stepping inside of the Maybach GLS, while upscale options like rear recliners and a champagne fridge adorn the cabin. There’s even a Maybach-specific drive mode that makes the large SUV feel even more cloud-like on the road. All of it lends credence to the SUV’s six-figure starting price; the Maybach GLS costs $160,500 out of the gate.

But on the other end of the spectrum, there’s still too much GLS in this vehicle’s DNA. Exceptional levels of comfort, safety, and technology give the Maybach GLS its impressive score – in fact, it’s the highest-rated SUV we’ve driven to date. But the clearly visible GLS bones, in contrast to the ground-up Rolls-Royce and Bentley alternatives, sort of dull the experience comparatively. That’s not to say this posh crossover isn’t definitely worth the price of admission, however. 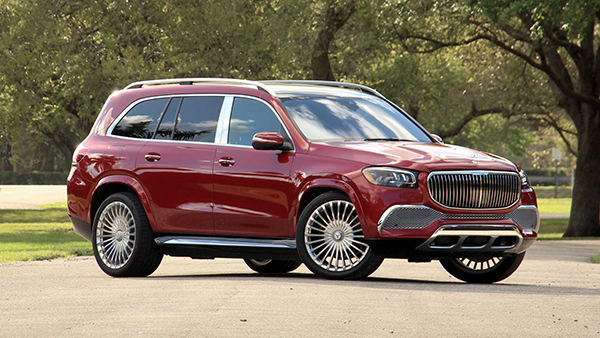 Design is obviously subjective, so feel free to tell us that we need to get our eyes checked if you disagree. But dang, the Mercedes-Maybach GLS is hard to look at. Most of the issues with the styling are on the front end, specifically the overuse of chrome in the grille and the absolutely gaudy lower vent openings with the same eye-searing treatment.

The Maybach GLS wears a variant of the traditional Mercedes front grille and bumper, but it ditches the embedded tri-point logo (because Maybach) and opts solely for bright vertical chrome slats instead. But it’s the chrome vent inserts just below that draw the eye more immediately, and not in a good way; they don’t mesh well with the GLS’s overall design, especially the bright Designo Cardinal Red paint (a $360 option).

The Maybach-specific 23-inch wheels are extremely dope, to be fair. And the chrome window surrounds and roof rails aren’t as offensive as that front end is (though why isn’t the C-pillar trimmed like the B-pillar?). The back end of the Maybach GLS is mostly clean, too, keeping the core GLS design elements intact. But you could still do without the wholly unnecessary chrome between the taillights and lower down on the bumper.

Inside, the front compartment of the Maybach looks and feels a lot like a traditional GLS. The optional wood-trimmed steering wheel ($600), pinstriped black piano trim ($850), and a smattering of Maybach logos are the only visual differences between this luxed-up version and a well-equipped base model. Otherwise, the same basic layout from the GLS carries over untouched: two 12.3-inch screens sit perched atop the dash, there’s a touchpad controller within the center console, and the vent and dash styling go totally untouched.

Thankfully the Maybach’s back seat picks up most of the slack, ditching the traditional bench and/or captain’s chairs, as well as the third row entirely for two lounge-like electric recliners. And not only do these seats look great covered in black Exclusive Nappa leather with appropriate embedded logos and even a Maybach-branded pillow, but they are the definition of comfort. More on that in a second. 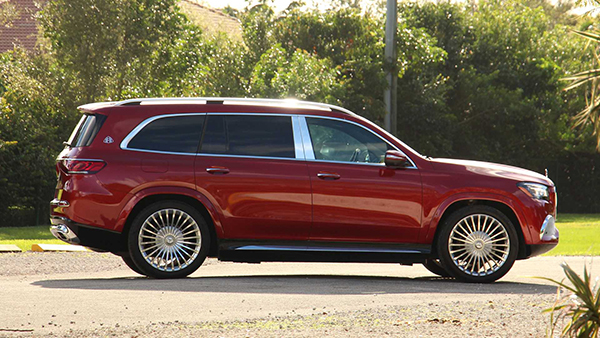 There is no better place to be (maybe in the world?) than the backseat of a Maybach GLS. The two Nappa leather-coated rear recliners have heating, cooling, and massage functions, as well as acres of available legroom (an impressive 43.4 inches, to be exact). If you’re sitting behind the passenger, there’s even a button that folds the front seat forward, allowing you to fully recline – almost flat – with a power leg rest propping up your feet and a pillow at your head. It’s very comfy. There are also buttons on the door panels that let you raise and lower the window shade at will to avoid that pesky sunlight and/or paparazzi.

Between these two chairs is a center console ripe with features, the most obvious being a removable tablet that allows you to control basic MBUX functions. There are also two folding tables (an $1,800 option), which make it easy to work on a laptop or eat Chinese takeout – I did both – and there’s even a champagne fridge with two champagne flute holders, because of course there is. The only thing missing, really, is someone to hand-feed you grapes – though I’m sure Mercedes would oblige if you asked them nicely enough.

One interesting feature this vehicle does have, though, is a model-specific Maybach mode that really hammers the comfort point home. The Maybach drive mode dulls the twin-turbo V8 to a whisper – more so even than the normal Comfort mode – and softens throttle response, transmission, and suspension feel to make the GLS resemble a properly floaty land yacht. Only a handful of other crossovers feel this effortless on-road, chief rivals like the Rolls-Royce Cullinan and Bentley Bentayga most notably. 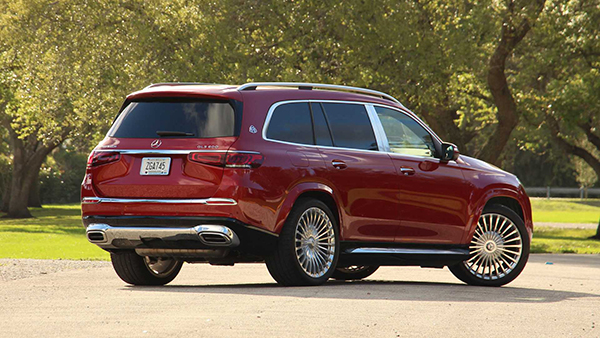 My gripe with the relatively unchanged interior design extends to the technology – there’s very little here that separates the Maybach’s tech from the other variants. The only differentiators are Maybach-specific gauges in the digital instrument cluster and a few well-placed Maybach badges within the screen. That said, MBUX is still one of my favorite setups, so there’s not too much to complain about.

Twin 12.3-inch displays sit front and center with the same layout you get on the non-Maybach GLS. The home screen is clean, the graphics are crisp, and the touchpad makes it all easy to navigate, even if I still stan the previous rotary dial. Advanced features like augmented-reality navigation and the “Hey, Mercedes” voice assistant carry over, naturally, and it’s all very easy to use.

The biggest difference between the Maybach and all other GLS models is that rear-mounted tablet mentioned earlier. Passengers in the second row have access to nearly every feature of the MBUX infotainment setup, things like the radio, navigation, and more. Second-row users can also change the ambient lighting and control all rear massage and seat functions from that tablet, as well. Plus there’s in-car wi-fi and a pretty bumpin’ Burmester sound system. 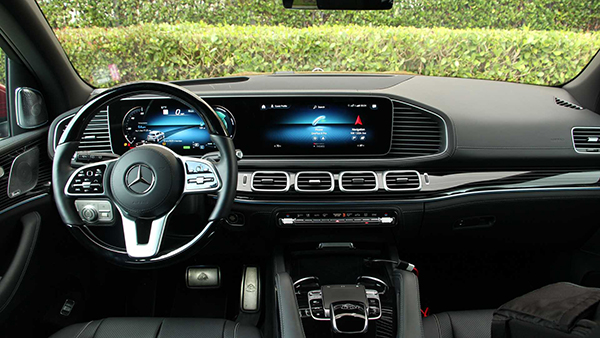 The Maybach GLS uses the same AMG-sourced twin-turbo V8 as the GLS 63, good for 550 horsepower and 538 pound-feet of torque here (plus an extra 21 hp and 184 lb-ft at low speeds courtesy of EQ Boost). And yes, this vehicle will hurry to 60 miles per hour in 4.8 seconds – although it feels less like a sprint and more like a brisk saunter. But the Mercedes-Maybach GLS isn’t a “performance” crossover in the traditional sense.

The Maybach GLS excels at being comfortable, and that extends to this vehicle’s larger performance portfolio. Typical drive modes like Individual, Sport, Comfort, Off-Road (not that you should ever take this thing on dirt), and Comfort carry over from the standard GLS. That last one feels like a foregone conclusion.

Even if you do tick the drive mode selector to Sport, the Maybach GLS does not carve corners like its AMG sibling. This vehicle handles turns smoothly and with poise as any proper Maybach model should. Aided by E-Active Body Control and the standard air suspension system, with a “Curve” function for twistier pavement – which physically leans the vehicle into turns – the gargantuan 6,000-pound crossover moves with grace but still yields lots of body roll on the tighter stuff. No matter how technical the GLS is underneath, the laws of gravity and physics remain undefeated. 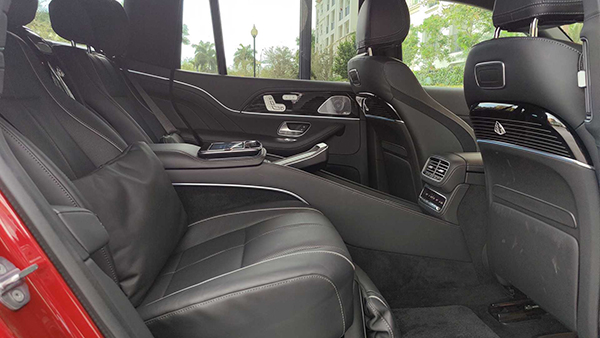 Mercedes offers some of the best active safety equipment on the market today, and virtually all of those features come standard on the Maybach GLS. The setup includes LED headlights with high-beam assist, lane-keep assist, steering assist, cruise control with stop-and-go functionality, and even an automatic lane-change function. Simply pull the indicator stalk and the Maybach GLS changes lanes automatically when safe.

I can only wax poetic about the Mercedes safety systems so many times, but the Maybach GLS is pretty much flawless on the highway. With all of the active features engaged, the GLS stays perfectly centered in the lane, maintains a safe and steady pace to the vehicle in front of it, and brakes smoothly all the way down to zero. 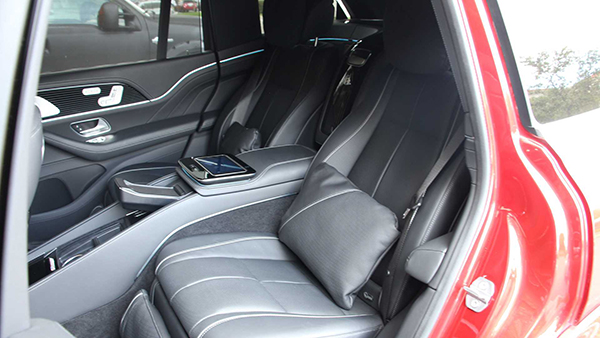 The Mercedes-Maybach GLS isn’t a fuel sipper, achieving just 15 miles per gallon city, 19 highway, and 16 combined. But then again, no crossover in this class is, exactly. The Rolls-Royce Cullinan achieves 14 mpg combined and Bentley Bentayga achieves 16 mpg at its most efficient. With EQ Boost standard on the Maybach, the Mercedes is technically the only hybrid option in the class, according to the EPA, which helps its overall score. 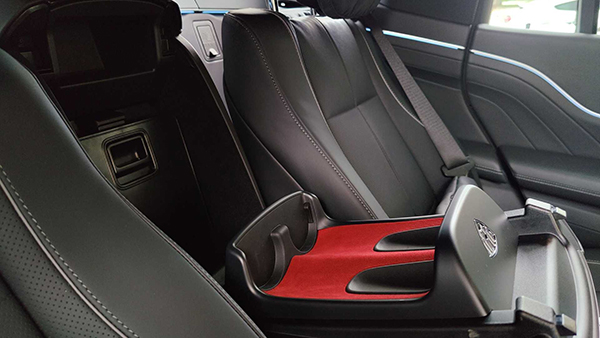 After options, our Maybach GLS costs $172,560 – which still makes it more affordable than both the Bentayga and Cullinan to start. But many of the features that make the Maybach GLS, well, a Maybach in the first place are actually optional. The 23-inch wheels cost a whopping $5,500, the folding tables in the rear are another $1,800, the champagne fridge ($1,100) and flutes ($800) are extra, too, and even the wood-trimmed steering wheel is a $600 add-on. At least the comfy second-row recliners are a no-cost option.