Even though it’s a huge automaker, Daimler hasn’t developed the V12 as much as Ferrari and Lamborghini. M275 is the codename of the twelve-cylinder mill introduced in the 2000s, only to be replaced by the M279 in 2012 when the AMG performance division rolled out the SL 65 and G 65. 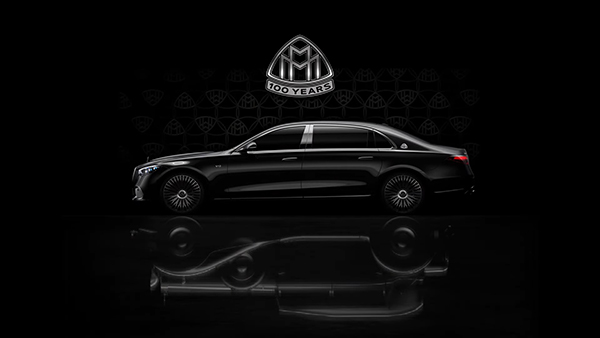 Mercedes is celebrating a century of Maybach this week, and while that’s not exactly newsworthy, one little detail caught our attention. An image of the latest extra-long S-Class accompanies the press release talking about 100 years of luxobarge, showing an elegantly black example along with a reflection of its forbearer – the 1922 Maybach 22/70 HP W3.

Again, that’s not breaking news, but look closer on the front fender of the Z223 (the Maybach S-Class’ codename) and you’ll notice a badge that’s becoming more and more of a rarity. Yes, we are talking about the V12 logo. Mercedes has long confirmed to keep the twelve-cylinder alive for the latest-generation S-Class, and now they’re about to live up to that promise with a big-engined Maybach.

The three-pointed star is keeping details under wraps for the time being, but the flagship S-Class is expected to feature the familiar twin-turbo 6.0-liter engine. It’s likely going to carry the “S650” or “S680” badge and offer in excess of 600 horsepower sent for the first time to a 4Matic all-wheel-drive system rather than only to the rear axle.

With the AMG S65 reportedly being replaced by a V8 plug-in hybrid S73e, it means the Maybach S650 will be the only version of the S-Class to offer a V12 engine. It will go up against the likes of the Bentley Flying Spur W12 and the Rolls-Royce Ghost, while Audi is believed to be working on a W12-powered A8 Horch for the luxury sedan’s upcoming facelift. BMW still sells the V12-powered M760i, although it will bow out after the current-gen 7 Series.

If a new Maybach S-Class Pullman is in the works, the stately sedan will also receive the engine. We can’t say the same thing about the Maybach GLS as there are no plans to cram the V12 inside the SUV’s engine bay.

n a related note, Daimler’s ultra-luxe brand will please one-percenters looking for more eco-friendly powertrains by coming out with fully electric models. Time will tell whether the 2022 Mercedes-Benz EQS due to be revealed today will get the posh double M treatment later this decade.