Do you like the Mercedes-Benz GLS-Class, but just don’t think it’s fancy or expensive enough as it is? Maybe the AMG version is too audaciously sporty or you’d prefer a completely different flavor of garish. Maybe you don’t want to be seen driving the GLS at all. If you’re looking for the perfect GLS to be driven in, but need to make sure you look more like the type of fat cat to blow money on lavish, boozy dinners and decorative fountains than the pro baller who splurges on a home gym and tennis courts, Mercedes finally has the giant SUV just for you: the Mercedes-Maybach GLS 600. 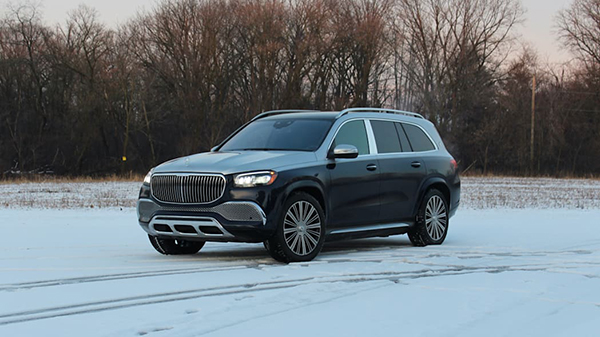 Is this tongue-in-cheek straw man in any way indicative of an actual Maybach owner? Who knows. We can barely comprehend how rich someone might be who can afford this $161,525 ultra-luxury SUV (before any options) let alone actually know someone of such largesse. Nevertheless, the GLS upon which it’s based is certainly no stranger to us. We first drove the GLS 470 in Austria’s Tyrolean Alps, sampled the AMG GLS 63 in the Columbia River Gorge, and nominated its bouncy E-Active Body Control suspension for Autoblog’s 2020 Technology of the Year Award. Most of the same ingredients are present in the Maybach 600, but just one look at this two-tone luxury liner requires you to rethink the scope of what the GLS can do.

While the overall body style looks more or less the same, there was no mistaking our tester for an ordinary GLS, or even an extraordinary AMG model. The two-tone paint — Lunar Blue Metallic below, and Iridium Silver Metallic from the beltline up — shouts to passersby (in an aristocratic German accent, presumably) that there’s something different going on here. The optional wheels, which get their own Maybach design, measure an absolutely massive 23 inches. Perched on the nose is the nearly extinct Mercedes hood ornament. The final giveaway comes when you move in a little closer and see the Maybach badging on the grille, tailgate and D-pillars.

But seriously, that paint job is something else. 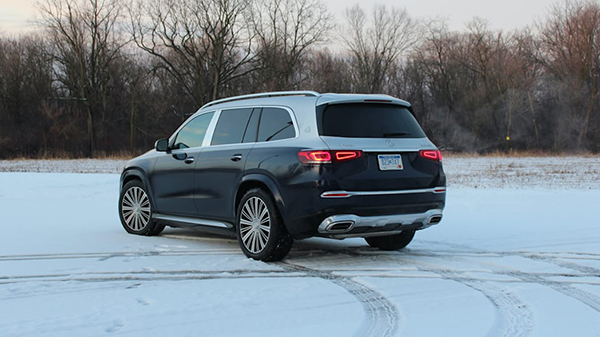 The exterior doesn’t quite do justice to what awaits within. The driver’s door opens to a rich, inviting and clearly technologically advanced cockpit. The dual screen dash housing the instrument panel and infotainment touchscreen is becoming familiar from GLS down to GLA, as are the multitude of controls on the wheel and center console with which one can easily interact with them. The ambient lighting not only sets the mood, but also accentuates features like the grab handles on either side of the center console, and the shiny Burmeister speakers on the A-pillars. Combined with the quilted black Nappa leather upholstery, the cockpit has a lounge-like atmosphere, complete with massaging seats, and heated and cooled cupholders.

The front seat doesn’t do justice to the ultimate levels of luxury reserved for the rear passengers. Unlike the rest of the GLS line, there’s no third row in the Maybach. Instead, the second row gets a few more inches of legroom. The two chairs — our tester was decked out in the four-seat configuration — have power legrests that can help take advantage of that extra space. They’re exceedingly comfortable, and they, too, provide heat, ventilation and massage functions. They also have matching leather throw pillows, because of course they do, but you’ll have to store them somewhere else if you want to install a child seat. Between the rear seats is a heated armrest with a removable 7-inch Samsung tablet that has its own climate, seat and infotainment controls. 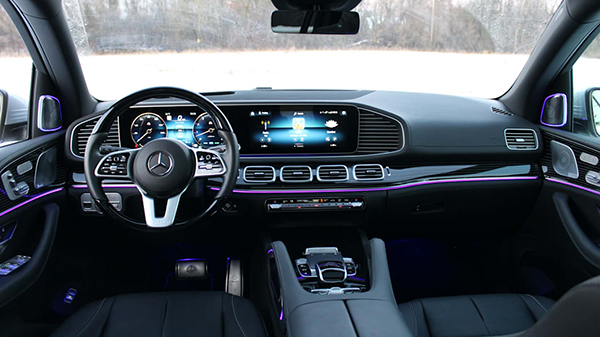 The most extravagant option on our Maybach GLS, apart from that two-tone paint (which, by the way, costs an extra $18,500) is the inclusion of a fridge ($1,100) between the rear seat backs. And it’s not just some bland cube of a thing either. Lowering the cover to the fridge, there is a velvet-lined holder ($800) for a pair of champagne flutes. Just make sure you buy the right-sized champagne flutes or buy the ones Mercedes offers — ours didn’t quite fit. Open the fridge itself, and it’s clear this whole outfit is specifically meant for champagne, with the bottom molded into grooves to store two bottles on their side. Up in front of the armrest, just behind the heated and cooled cupholders, are two smaller holders that can clip the base of the flutes in place. The one drawback is that the fridge impedes deep into the cargo area, limiting the room for luggage.

While the VIP section may be in the back, a livelier party is going on out front. The Maybach GLS 600’s 4.0-liter twin-turbocharged V8 is tuned to a meaty 550 horsepower and 538 pound-feet of torque, an increase of 67 horses and 22 pound-feet over the GLS 580, but not as raucous as the AMG’s 603 hp and 627 lb-ft. Though its claimed 0-60 time is 4.8 seconds, or 0.4 seconds quicker than the 580, the Maybach doesn’t feel all that different when you look away from all the fanciness and go by your other senses. The Maybach does a good job of keeping everything feeling calm and isolated during full-booted maneuvers. 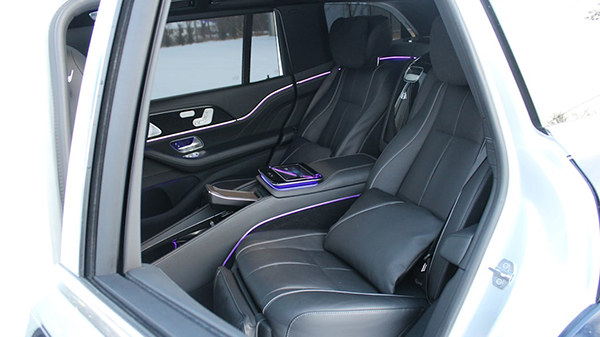 Our time with the Maybach GLS came during a significant snow shower followed quickly by rising temperatures. We were able to enjoy its surefootedness in the snow, but the resulting slush-filled potholes meant that exterior paint was quickly dirtied, and impossible to keep clean. Keeping it in Comfort mode most of the time, the GLS’s electronically controlled suspension — complete with E-Active Body Control including cameras that read the road ahead and adjust accordingly — provides an appropriately smooth ride for those champagne-sipping clients in the back (assuming you’re in a locale where passengers are allowed to imbibe).

While it’s a fine vehicle to drive — as is the rest of the GLS lineup — the Maybach version is really the one you want to be driven in. Alas, as my fellow editors and I are sequestered from each other during the pandemic, there was no one to commandeer into chauffeuring me around. Still, I did find time just to recline back there in my driveway, get a massage, enjoy soothing music from the fantastic Burmeister sound system and watch the sky through the panoramic sunroof. While I relaxed with a cupholder-chilled Diet Coke, I could let my mind drift and ponder my preferred decorative fountain.