Dartz’s latest model was a tiny EV called “FreZe Nikrob“, which was actually a rebadged Wuling HongGuang Mini EV, so the Latvian company urgently needed a new, huge, opulent, and badass military-style SUV to regain its status. This is exactly what they did with the Dartz Prombron Black Alligator MMXX that was unveiled in the “Black Tiger Moon Edition” that’s designed for China, while they also announced an upcoming EV. 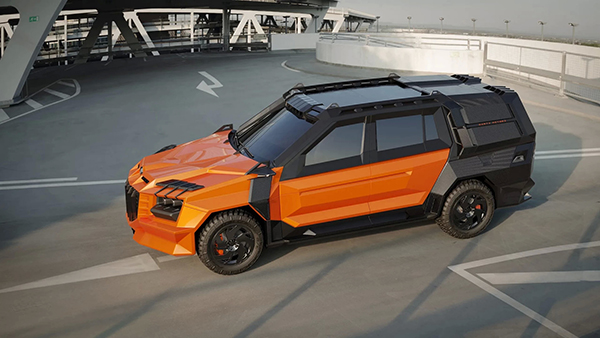 For those who Mercedes-Maybach GLS is not luxurious enough and an armoured Mercedes is not safe enough, Dartz – the Latvian manufacturer of high-performance armoured vehicles – offers them something very special: the limited series of the Dartz Black Alligator MMXX, called Black Tiger Lunar Year Edition.

For 10 years, since Dartz entered the Chinese market, the super exclusive Latvian manufacturer of luxury armoured models has been offering special series of models based on the Chinese Zodiac. This year, based on the Black Alligator MMXX, Dartz comes up with a special series called Black Tiger Lunar Year Edition to mark 2022, the Year of the Tiger. And the orange and black colours are not accidental as they signify the exact colours of the tiger.

The Black Alligator MMXX is the first machine built by DARTZ using GBOL technology, which was previously used only for the military industry. Thus, the Latvian manufacturer has managed not to increase the weight substantially and the Black Alligator MMXX weighs exactly the same as a Mercedes-Maybach GLS that tips the scales at 2785 kg.

Dartz mentions that the power of the 557-hp 4-liter twin-turbo V8 engine has been increased, but they don’t provide the exact figures. They only indicate that it is 100-200-300 HP higher. But they reassure us that the extra 100-200-300 HP “will allow you to get out of the line of fire faster than the bad guys will test how good your armor is”.

How was it possible for an armored car to weigh as much as an unarmoured one? Dartz doesn’t want to give away military secrets but they give us a clue. Sapphire glass, which can be twice as thin, offers the same protection and was created especially for Dartz in Bohemia. Dartz will also offer an unarmored civilian version that will be even lighter than the Mercedes-Maybach GLS, which will allow you to get away from McDrive very quickly.

Normally, armoured cars have an armoured wall right behind the rear seats. But this makes the precious rear passenger feel like a prisoner. Dartz has done away with this wall and armoured the tailgate to give passengers more freedom. And so there is a small bar where the passenger can celebrate escaping an ambush.

There are no door handles to be seen anywhere and you would think that they are camouflaged in the bodywork surface, but Dartz tells us that they are old good mechanical door handles. They fail to tell us though, where exactly they are located. And another nice detail. The car has eight exhaust pipes, one for each cylinder. Dartz is one of the only builder whose cars haven’t needed electronic engine sound simulation in the recent years. Unfortunately, we live in shitty times where the engine sounds like a phone. 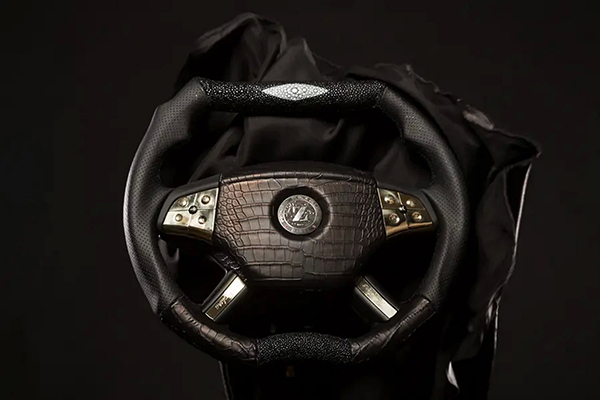 There are no rearview mirrors either because they have been replaced by cameras placed in the little wing-shaped places on the bonnet. The cameras are primarily for safety because when the car is being shot at and you can’t see out of the windows, the cameras help you see where to get out of an ambush.

Dartz are not too happy with the touch screens and have exchanged modern “tablet gauges” with an old good digital. Because Dartz customers wear mechanical watches. But they still left a table for navigation because navigation on a paper map is not the best solution today. But you can optionally order diamonds on board.

Dartz owner Leonard Yankelovich:
“Luxury is too common a word…luxury you can buy in a supermarket. I use the word opulence”. 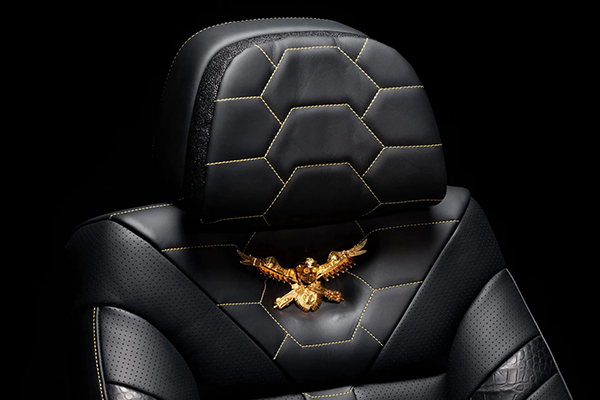 Audio system? Yes, of course. A bespoke one for a bespoke car. But it is not a CD or an MP3 player. There is a reel to reel tape as a must-have option.

Dartz became famous in 2012, when they were contacted by Paramount Pictures on behalf of Sacha Baron Cohen with the task of creating a symbol of unlimited monetary resources for a fictional character, representing an oppressing dictator of a fictional North-African country, starring Sir Ben Kingsley.

Dartz provided them with a fleet of Dartz Motors Prombron gold-plated armoured models, with a bizarre leather interior and heavy-duty armour as well as a full support team during the filming and premiere of The Dictator, starring Sacha Baron Cohen, which took place in London in 2012. Subsequently, two Dartz Motorz Prombron models appeared in Die Hard 5 starring Bruce Willys (2013), while Olga Kurylenko and Pierce Brosnan used another Dartz model in The November Man (2014).