The Traxxas 1/10-scale Mercedes-Benz G63 AMG 6×6 RC car is a cool scale-model off-roader straight out of the box. Its purpose is not to be blazing fast on the street, but a video on the Harley Designs YouTube channel shows that this is possible after doing a whole lot of work to the machine.

The additional upgrades include a much larger motor. Pieces of carbon fiber with titanium fasteners make the underbody flat, and there’s a diffuser at the rear. He also adds a big front splitter. The rig now rides on belted tires. 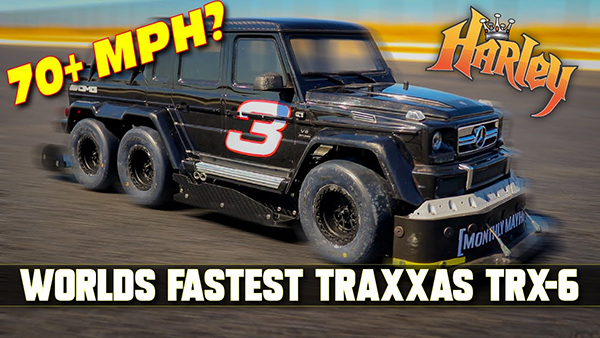 The host finds a long strip of newly poured asphalt that appears to be for a housing development. During the test runs the G63 AMG 6×6 RC car looks fairly unstable. Even the tiniest steering input upsets the machine at speeds over 62 mph (99.8 kph).

He then switches to a different location that has a longer straight section. Unfortunately, there’s a crest in the road that causes the RC car to jump and nearly crash during the first run. However, the GPS shows a top speed of 70 mph.

Moving farther down the road eliminates the concern of hitting the jump at high speeds. The first run here is 72 mph (115.9 kph). The next attempt is another 72-mph attempt. After a little maintenance, one last try yields a top speed of 73 mph (117.5 kph).

This highly modified RC car can clearly top 70-mph with ease, but the owner would like to try to hit even faster speeds. He speculates during the video that tweaking the gearing might to a way to raise the maximum velocity even higher.