Mercedes-Benz changed the exotic truck world many years ago with the G 63 AMG 6×6, a monster that inspired Chevy and Ford custom 6-wheelers. It became the standard for showing off, but hasn’t been in production for many years. Plus, its dimensions made it impractical. And that’s where the Brabus 800 comes in, which is still an extreme off-roader, minus the extra axle.

The normal G 63 came out a couple of years ago and became hugely popular. After that, Brabus introduced a “800” version of the SUV, which cost something like 380,600 euros or around $424,000 at the time. But the Adventure XLP is something completely different, a truck conversion. The first one was put together in time for the 2020 Geneva Motor Show, which got canceled. 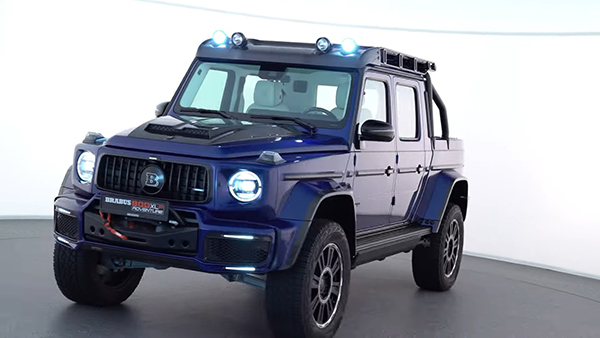 The XLP has a custom wheelbase that’s extended by 19.7 inches (50 cm). And as far as we can tell, there are at least five of them in the world, the first in silver, a black one, the yellow one, a grey one in the Middle East, and this new blue example.

Blue has always been one of the coolest Brabus colors, a trademark made famous by their custom blue leather interiors. The color is paired up with an obvious body kit that borrows elements from the Widestar G 63. There’s no missing the power of the beast, as behind a custom hood sits the modified version of an AMG V8, producing 789 hp (800 PS) and 738 pound-feet (1,000 Nm) of torque. It will supposedly do 0-62 mph (0-100 kph) sprint in 4.8 seconds, which isn’t bad for such a tall and heavy vehicle.